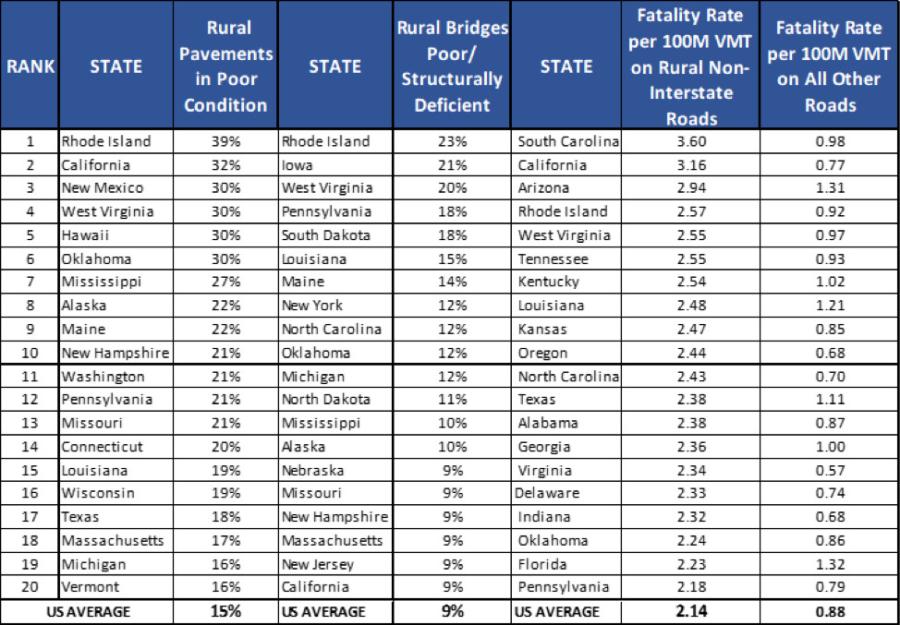 America's rural transportation system is in need of repairs and modernization to support economic growth in the nation's Heartland, which is a critical source of energy, food and fiber. With increases in population and growing employment, rural America is heavily reliant on the quality of its transportation system to sustain further growth. This is according to a new report released May 22 by TRIP, a national transportation research nonprofit.

The report, Rural Connections: Challenges and Opportunities in America's Heartland, evaluates the safety and condition of the nation's rural roads and bridges and finds that the nation's rural transportation system is in need of immediate improvements to address deficient roads and bridges, high crash rates and inadequate connectivity and capacity. 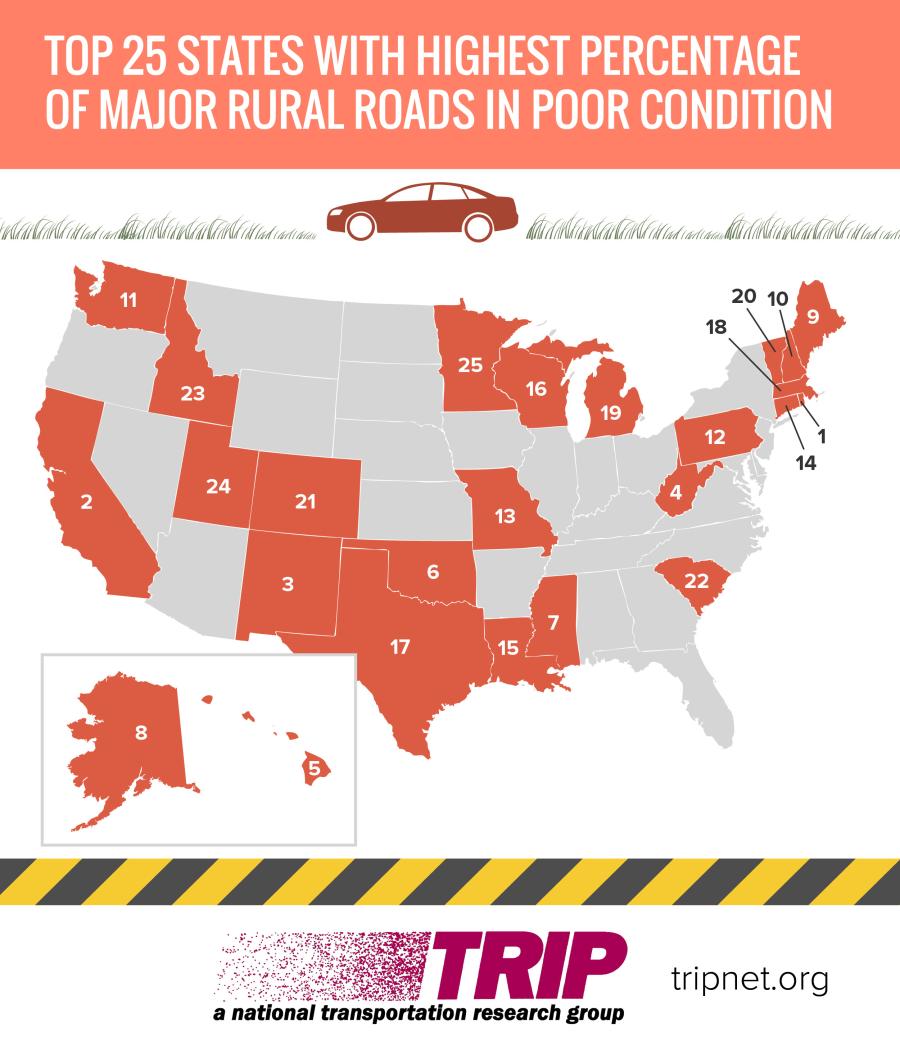 The report finds that the nation's rural roads and bridges have significant deficiencies. Fifteen percent of U.S. rural roads are rated in poor condition, while 21 percent are in mediocre condition. Seventeen percent of the nation's rural roads are in fair condition and the remaining 47 percent are in good condition. Nine percent of the nation's rural bridges are rated in poor/structurally deficient condition, meaning there is significant deterioration to the major components of the bridge. Poor/structurally deficient bridges are often posted for lower weight or closed to traffic, restricting or redirecting large vehicles, including agricultural equipment, commercial trucks, school buses and emergency services vehicles.

Forty-six percent of rural bridges are rated fair. A fair rating indicates that a bridge's structural elements are sound but minor deterioration has occurred to the bridge's deck, substructure or superstructure.

"Farmers and ranchers depend on rural roads, highways and bridges for daily life and to move their products to market," said Zippy Duvall, president of the American Farm Bureau Federation. "Securing the appropriate resources at the local, state and federal levels will allow for the improvements needed to provide a rural transportation system that will keep goods moving, American agriculture competitive and rural Americans safe."

In addition to deteriorated roads and bridges, the TRIP report finds that traffic crashes and fatalities on rural non-Interstate roads are disproportionately high, occurring at a rate nearly two-and-a-half times higher than on all other roads. In 2017, non-Interstate rural roads had a traffic fatality rate of 2.14 deaths for every 100 million vehicle miles of travel, compared to a fatality rate on all other roads of 0.88 deaths per 100 million vehicle miles of travel. Rural roads are more likely to have narrow lanes, limited shoulders, sharp curves, exposed hazards, pavement drop-offs, steep slopes and limited clear zones along roadsides.

"This report highlights again the critical need for federal action to modernize our nation's infrastructure," said Ed Mortimer, vice president of transportation infrastructure of the U.S. Chamber of Commerce. "We have a historic opportunity to address many rural infrastructure needs with President Trump and Congress discussing a major infrastructure bill. Let's hope they act to address this critical issue."

The TRIP report found that America's rural population, which had declined slightly from 2010 to 2016, increased in 2017, adding an additional 33,000 people. The modest rebound in rural population is likely a result of increased employment and declining poverty, the report found. The number of jobs in rural America increased by 370,000 from 2013 to 2017 and the rural unemployment rate has decreased steadily from 10.3 percent in 2010 to 4.4 percent in 2017. The rural poverty rate, which is the percentage of people who are making below the amount of money deemed necessary to have a basic standard of living, has decreased from 18.4 percent in 2013 to 16.4 percent in 2017, the TRIP report noted. 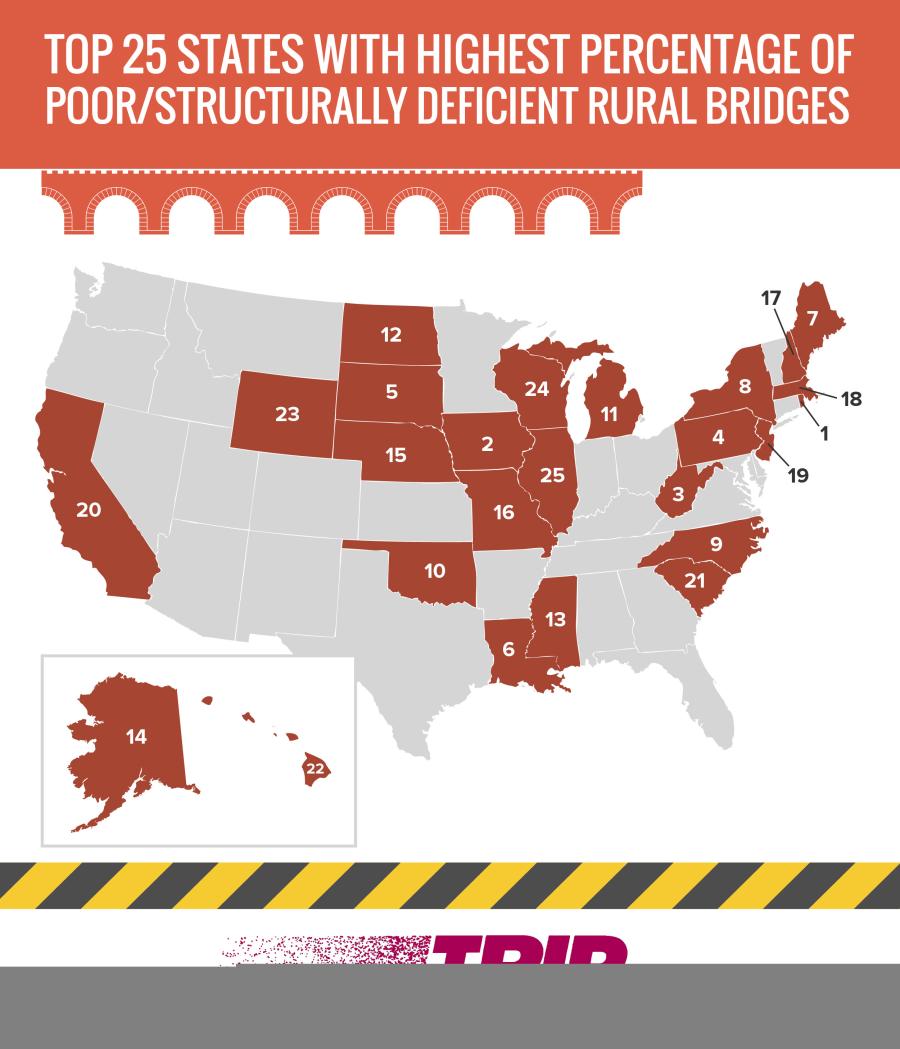 America's rural transportation system provides the first and last link in the supply chain from farm to market, connects manufacturers to their customers, supports the tourism industry, and enables the production of energy, food and fiber. Rural Americans are more reliant on the quality of their transportation system than their urban counterparts.

"Rural roads play a critical role in supporting the transportation needs of millions of Americans every day," said Kathleen Bower, AAA senior vice president of public affairs and international relations. "Damaged and deteriorating roadways too often result in deadly crashes, and it is time to act. Making critical safety improvements to rural roads will save thousands of lives each year and help move our economy forward."

The TRIP report finds that the U.S. needs to implement transportation improvements that will improve rural transportation connectivity, safety and conditions to provide the nation's small communities and rural areas with safe and efficient access to support quality of life and enhance economic productivity.

"The health of the nation's economy and the safety and quality of life in America's small communities and rural areas ride on our rural transportation system. Our rural roads and bridges provide crucial links from farm to market, move manufactured and energy products, and provide access to countless tourism, social and recreational destinations," said Will Wilkins, executive director of TRIP. "Fixing the federal Highway Trust Fund with a long-term, sustainable source of revenue that supports the transportation investment needed will be crucial to the modernization of our rural transportation system."