Rich Hillesheim admits he has a hard time saying no. 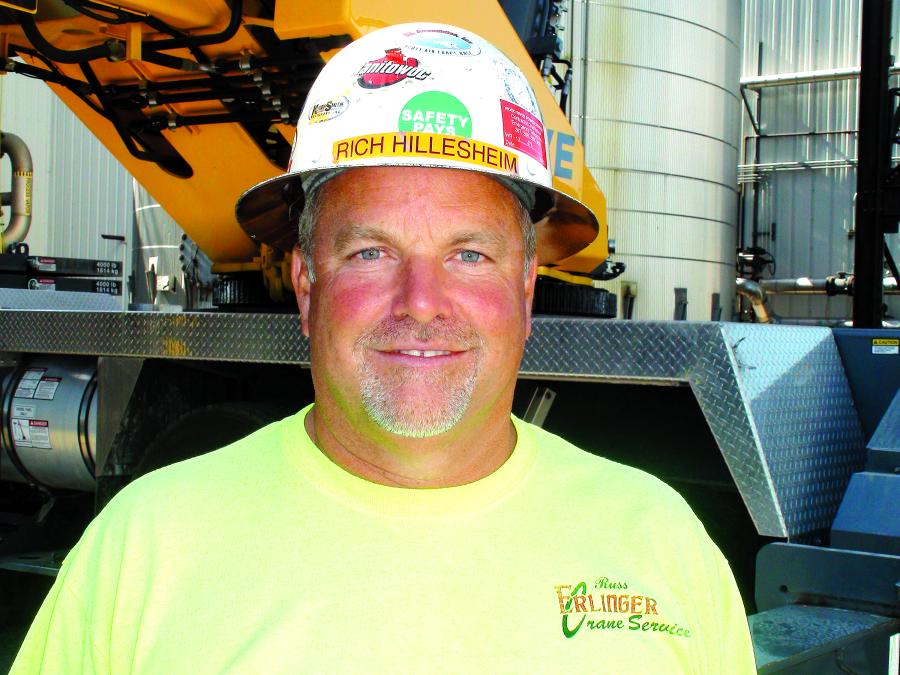 Rich Hillesheim admits he has a hard time saying no. “It's not in my vocabulary, and that's one reason why we have continued to grow and take on new customers,” he said. “Whenever a client calls — day or night, seven days a week, 365 days a year — we respond.”

“A great deal of our work comes from word-of-mouth referrals,” said Hillesheim. “We do a lot of repeat work, and the phone often rings with new customers who got our name from existing clients we've built solid relationships with. We're happy to help them out too.”

Hillesheim is quick to point out that Russ Erlinger Crane Service's workload is not based solely on referrals.

“I still beat the bushes and actively seek out new customers,” he noted. “Of course, some of them tell us they have heard good things about us. That plays a role in gaining additional business. The people who work for me are also talking with current customers in an effort to seek out ways we can do more for them and increase our project list.”

No Job Too Big, or Small

Hillesheim joined Russ Erlinger Construction in 1988. At the time, the company had one boom truck that was used for “in-house” construction projects. During the next two decades, he took over the business and transitioned it into a stand-alone crane service operation, expanded its territory and changed its name.

Today, Russ Erlinger Crane Service performs all types of lifts, from residential truss work to setting industrial steel, which is its specialty. It also handles HVAC, manufacturing equipment and agriculture items such as grain bins and silos.

“Our attitude is that no job is too big or too small,” said Hillesheim. “Whether it's an hour, a day, a week, a month or longer, we will work to get it done safely and as efficiently as possible.”

Much of the credit for the ability to make that happen goes to a highly skilled and experienced work force.

“All of our operators are certified and have a commercial driver's license,” said Hillesheim. “That combination allows them to move any crane to any job site at any time, set it up and make picks in the safest and most cost-effective ways.

“I really have to credit the entire staff for being key to the company's success,” he added. “From our office personnel, to the crane operators and others in the field, Russ Erlinger Crane Service would not be where it is today without their dedication and contributions to customer satisfaction.”

During the past five years, Hillesheim has nearly doubled the size of his crane fleet, which is comprised exclusively of Manitowoc/Grove products. He now has 15 models, ranging in size from 40 tons (36.28 t) to a 115-ton (104.33 t) GMK4115 all-terrain, in addition to several boom trucks. Recent additions include a new TMS800E truck-mounted crane.

“Building the fleet is a continual process, but having Manitowoc/Grove products in it has never changed,” said Hillesheim. “I've never even tried another manufacturer. The Manitowoc/Grove cranes are well-built throughout the lineup.

“I really like the truck-mounted and all-terrain products because they give us a lot of flexibility and versatility for routine and emergency situations,” he added. “We can move them around by driving them on the roadways. When we get to a job, they set up quickly and easily and will make practically any pick our customers need. The new TMS800E is a great example. It has 128 feet of main boom and 80-ton capacity, but it also has a removable counterweight so it's adaptable to smaller picks. It's a good all-around machine for lifting air conditioning units, motors and a whole host of other items.”

“Kirby-Smith has always taken good care of us, from our previous territory manager, Dave Hoeft, to Bruce and the support staff,” Hillesheim said. “They understand the crane industry and what it takes for a business like mine to be able to keep moving without worrying about excessive downtime. Any need we have, they take care of right away. The service we receive from Kirby-Smith has always been one of the main factors in my decision to continue buying Manitowoc/Grove cranes.”

Russ Erlinger Crane Service occasionally uses cranes in tandem to make large picks. It's heaviest to date was a 70,000-lb. (31.75 t) transformer for an energy company.

“As long as we can do a job safely, we're willing to tackle about any lift a customer has,” said Hillesheim. “Over the years we've learned how to get those types of projects done as efficiently as possible. I believe customers appreciate that we won't back down from a challenge, so they keep us at the top of their list when it comes to doing any type of pick.”

“I don't plan for it; I never have,” he noted. “Growth has come from doing good, honest work and treating people fairly. Offering quality service allowed us to expand from one crane to a fairly sizeable fleet, and customers keep asking us to do more. If we continue to take care of them, there is no reason why the business can't keep expanding. Of course, I don't want to get to a point where we are too spread out and service suffers. I guess that's probably the point where I'll say no.”