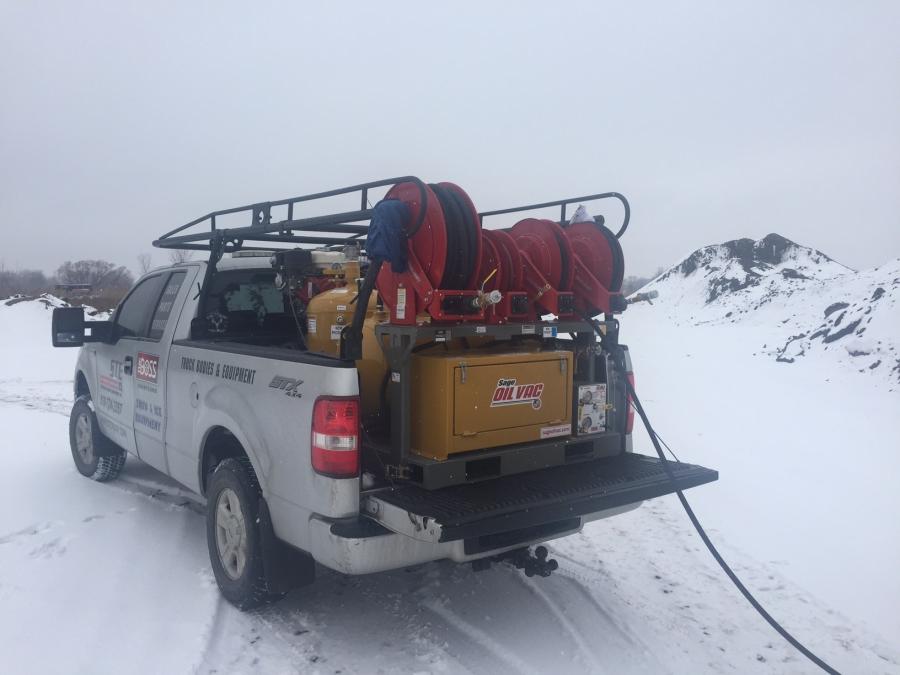 Sage Oil Vac heated tanks use immersion heaters that use standard coolant fluid and probes inside the tank to transfer heat to the oil.

Changing the oil in a piece of machinery outside — on the job site, on the farm or in the field — in the dead of winter is no fun.

But it has to be done, and with the right procedures and equipment, managing oil and fluids during the cold winter months doesn't have to be such a challenge.

It all starts with temperature. Just as you bundle up to head outside when the temperature dips, any oil change has to happen at the right time to be effective and prevent long-term engine damage.

Temperature is what makes changing oil more difficult during the winter, and it's temperature to which you need to be most attentive in the entire process, according to Sage Oil Vac CEO Aaron Sage.

He recommends performing an oil change within minutes of engine shutdown after operating at normal temperatures.

"If you're in the field in fall or winter, the best thing is to have the operator pull up to the oil change site and do the oil change within the next five minutes while the engine is warm," he said. "You can't go to a job site where the equipment's been sitting for 10 days without doing anything, then do the oil change. It's stone-cold and all the contaminants in that oil are settled on engine parts. Simply pulling the plug then is not going to yield a good oil change."

Even though heat can sometimes be dangerous when changing oil using conventional equipment, most experienced technicians know it's important to get the engine warm so oil is viscous enough to drain. But there's more to it than that — the functionality of engine oil declines in cold temperatures.

"It's not only viscosity but the position of the oil and the suspension of the minerals in that oil," Sage said. "That oil is there to clean wear metals and get contaminants off moving parts and suspend them in the oil, and they're usually suspended equally in the oil. If you run the engine to warm it up, then shut it off, those contaminants are going to settle out in the bottom of the pan, on valves and pistons and other parts."

The ideal scenario is to change engine oil when it is near operating temperature and therefore viscous enough to remove contaminants so they don't inflict further damage to engine parts.

However, handling hot oil can be dangerous and difficult, making the right facilities, tools and equipment critical to doing the job effectively and safely.

"If you know you're going to be changing oil in the winter, you really need to have quick disconnects on your oil pans. It's really helpful to have those to close the loop with the crankcase," Sage said. "Some drain into buckets because they have a mindset of ‘that's the way granddad did it, and that's how we're going to do it.'

"A Sage Oil Vac system eliminates the need to deal with buckets and helps get the job done at optimal temperatures, even when they're far from optimal outside."

A heated fluid tank can help, too. Sage Oil Vac heated tanks use immersion heaters that use standard coolant fluid and probes inside the tank to transfer heat to the oil. Leveraging a tool like this can enable operators to change oil more easily in cold winter conditions at optimal temperatures.

"Some say they take their machinery into the shop where they have an oil pit and temperature can be better controlled. But that shop might be 70 miles away from the job site, so they may lose two days of production," Sage said. "Time is money, and a Sage Oil Vac system and heated fluid tanks will pay for themselves quickly, especially when you take engine loss into account."

In addition to the effectiveness of changing oil at the right temperatures, and the convenience and cleanliness of using a Sage Oil Vac system, there's a cost benefit, too. Many choose to change engine oil inside a heated shop or building during cold winter months. But that can quickly erode revenue potential, especially when the machinery is integral to a job site's overall operation.