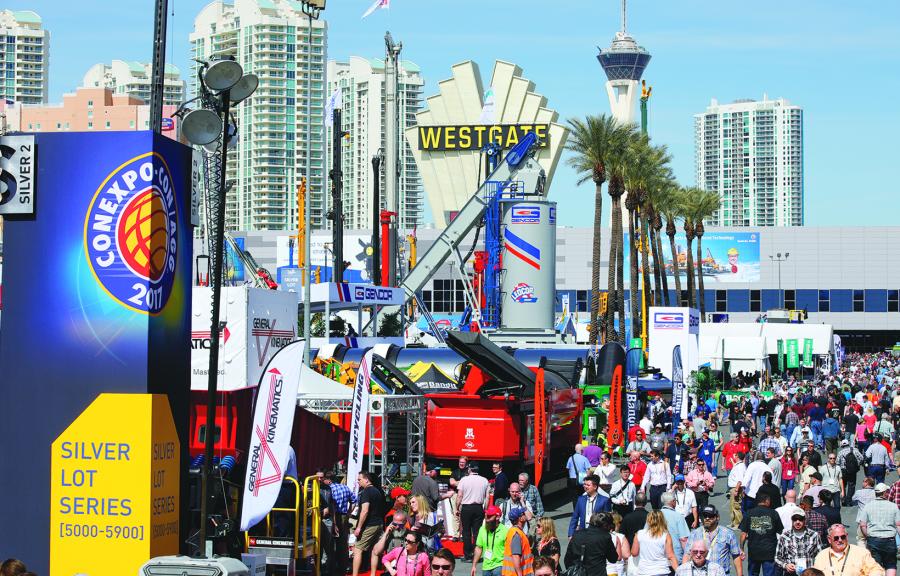 “This has been one of the best editions of ConExpo-Con/AGG — ever,” said Rich Goldsbury, 2017 ConExpo-Con/AGG chair and CEO and president of Doosan Bobcat North America & Oceania.

“Exhibitors are writing sales at an incredible pace, and attendees clearly came to Las Vegas to buy.”

“There was an element of confidence and pent-up demand at the show,” said Dave Foster, vice president of marketing & corporate communications of Volvo CE. “These are not tire-kickers.

These are people who are willing to buy multiple machines for work they have now and anticipated growth based on a renewed confidence in the market.”

A series of key metrics reflected the improved conditions, which were bolstered by a new pricing strategy intended to reinforce the overall quality of ConExpo-Con/AGG and IFPE 2017 attendees.

• Attendees purchased a record-breaking 52,000 tickets for education sessions at the show, a 26 percent increase from the 2014 show. Total ticket sales excluding IFPE jumped by more than 27 percent compared with 2014.

“I think there is a noticeable difference in the attendees at this show, and the difference is their optimism,” said Gradall Industries President and 2017 Association of Equipment Manufacturers (AEM) Chair Michael Haberman. “Optimism was on display throughout the show, and the traffic was excellent.”

At the same time, the technological change revolutionizing these industries was pervasive across the shows' record 2.8 million-plus net sq. ft. of exhibits featuring a record 2,800-plus exhibitors from the leading U.S. and global manufacturers, from multinational giants to small firms with specialized products.

The world's first 3D-printed excavator, the brand-new Tech Experience and a stellar education lineup anchored a forward-looking vision for construction and infrastructure on display at ConExpo-Con/AGG and IFPE 2017.

“Our shows are renowned as an industry showcase of 'what's next,' and this year's show did not disappoint. From the new Tech Experience, which highlighted the vital connection between technology and construction to the culmination of AEM's Infrastructure Vision 2050 Challenge, this year's show demonstrated the rapid innovation in our industry,” said Goldsbury.

The technological changes revolutionizing construction and manufacturing were a central feature throughout the show. The first-ever Tech Experience pavilion attracted solid traffic throughout the week, as attendees flocked to see the world's first-ever 3D-printed excavator, hear from industry innovators during a collection of “Tech Talks,” and engage with the conclusion of the Infrastructure Vision 2050 Challenge Finale, which awarded $100,000 in prize money to win ners over a crowdsourced competition to develop forward-looking infrastructure solutions.

“Keeping pace with technology is critical for our industries' success and the 3D-printed excavator featuring fluid power innovations, is a perfect example of the shows' future-forward commitment to explore innovations that are happening now and the exciting possibilities ahead,” said Robert Mortensen, IFPE 2017 chair and president of HUSCO International.

At the Tech Experience, three interactive zones gave attendees a firsthand glimpse at the technologies shaping the job sites of tomorrow, infrastructure development and workforce development.

The Association of Equipment Manufacturers (AEM) helped to convene a high-level conversation on the future of transportation infrastructure as five finalists squared off in the Infrastructure Vision 2050 Challenge Finale event. The top winner: a proposal from a pair of University of California-Berkeley students to leverage autonomous vehicle technology to develop a surge-priced “Hyperlane” to ease congestion and improve mobility.

AEM launched the incentivized competition to generate crowdsourced solutions to address the future of infrastructure here in America, and throughout the world. The campaign's three phases — Complain, Dream, and Build — drew hundreds of ideas from across the world about how to revolutionize infrastructure.

Attendees and exhibitors partnered to raise over $100,000 to help military veterans find quality through multiple charitable events throughout the week.

The proceeds, which benefit the show's official charitable partner, the Call of Duty Endowment, were raised through online, silent and live auctions, as well as an after-hours concert on Wednesday by the multi-platinum rock band Foreigner. The non-profit organization, founded by Bobby Kotick, CEO of Activision Blizzard, helps military veterans secure high-quality jobs and raises awareness of the value vets bring to the workplace.

“These new benefit events offered the opportunity for ConExpo-Con/AGG participants to not only network and have fun but also rally together as a construction industry community to raise funds to support military veterans,” said Sara Truesdale Mooney, show director and AEM vice president exhibitions and business development.

Comprehensive education programs at ConExpo-Con/AGG and IFPE 2017 helped attendees sharpen their professional skills and improve their businesses' efficiency and productivity.

The show offered a record 143 education sessions, grouped into 10 tracks, including a new Technology track. IFPE 2017 hosted the industrywide Energy Efficient Hydraulics and Pneumatics Conference in addition to hands-on “college courses” on effective use of hydraulics in mobile equipment.

Eight country-specific international exhibit pavilions reinforced the global scope of the shows and expanded the business contacts between attendees and exhibitors: IFPE with China, Italy, Korea and Taiwan, ConExpo-Con/AGG with China, Germany, Korea, and United Kingdom.

Hundreds of industry meetings, including annual conventions of eight industry associations, were held in conjunction with the shows in recognition of their reputation as an industry gathering place. More than 200 U.S. and international allied industry and business organizations signed on as official supporting organizations and more than 300 as supporting media.

“Our ability to work with competitors to organize this event provides an added benefit and contributes to the show, exhibitor and attendees success. As we have said before, this is a show put on by the industry — for the industry,” said Haberman. “Here we can share ideas and knowledge that will help the construction industry to grow and prosper.”

The shows received U.S. Department of Commerce (DOC) International Buyer Program status, signifying their status as a leading worldwide event, and offered a variety of services to facilitate international industry participation, including an International Trade Center on site.— CEG