The bridge is a crucial link between the two cities and is an important regional connection. 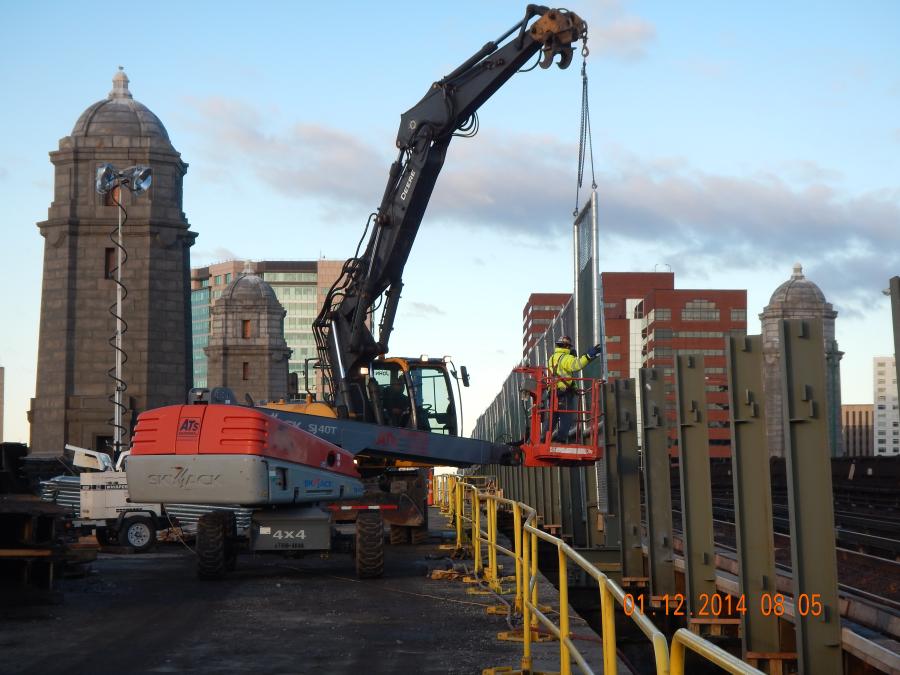 MassDOT anticipates that crews from White-Skanska-Consigli Joint-Venture (WSC) will complete the $255 million Longfellow Bridge rehabilitation between Cambridge and Boston in June 2018.

The project will restore the historic bridge, built in 1908, including rebuilding its iconic “salt and pepper” towers. The bridge is a crucial link between the two cities and is an important regional connection.

The project began in March 2013 and is being funded by the Commonwealth of Massachusetts and the Federal Highway Administration.

The bridge is 2,135 ft. (650.7 m) long and has a deck width of 105 ft. (32 m). The existing structure has two vehicle lanes in each direction, and accommodates 28,000 cars and trucks daily, as well as cyclists and pedestrians. The Massachusetts Bay Transportation Authority's Red Line also uses the bridge.

When completed, the bridge will have two inbound to Boston vehicular travel lanes, one outbound to Cambridge lane, and the two rebuilt MBTA Red Line tracks.

The project also includes the replacement of the adjacent Frances Appleton pedestrian bridge by widening sidewalks and adding bike lanes.

A new lighting system is being installed and areas along the riverbank disturbed by the construction will be fully restored.

The bridge, which has eleven original open-spandrel steel arch spans, plus two steel girder approach spans at the Cambridge end, was extended in 1956 and rehabilitated in 1959. The cross-section provided an upstream 6-ft. (1.8 m) sidewalk and a 33-ft. (10 m) wide roadway while the downstream side consisted of a 10-ft. (3 m) sidewalk and 29-ft. (8.8 m) wide roadway.

Boston area drivers are used to major construction projects affecting traffic. WSC is required to maintain emergency response, MBTA Red Line service and bicycle and pedestrian access on the bridge at all times. Road and lane closures for materials delivery and equipment moves are scheduled during off-peak travel times to minimize traffic impacts.

The following elements of the project are complete:

• Removal, cleaning, repairing and re-installation of the four salt and pepper towers and the granite wall and cap stones

The current phase is due to be complete in June 2018, a three-month savings to the original schedule presented by WSC. At the conclusion of this phase MBTA Red Line Trains, vehicular, bicycle and pedestrian traffic will all be in their final positions.

A major problem for WSC has been the confined work area, which means that safety is a priority for workers and bridge users.

“There are restrictions and limited elbow room because the arches between the spans are staying in place, you can appreciate the level of tolerance and accuracy of how things were built in the early 1900s,” said McInerney. “When you tie into existing pieces of infrastructure, it becomes more challenging. Things have to line up and in many instances they don't.

“The original builders used riveted construction for all the steel — a hot rivet was placed and compressed to conform to a hole. When we removed the rivets to replace the deficient steel, they did not necessarily line up. We have to replace the rivets with bolts and the bolts have to fit into the diameter of the hole. Some of the holes had to be reamed out to make them true and lined up to not impact the sizing of the bolts.”

The historical status of the bridge requires that certain portions of the work are refurbished accurately, including spans 1, 2, and 11 that go over dry land. The use of rivets is required for these portions.

“Rivets have not been used since the 1960s and we had to get people at the fabrication facilities to learn how to install them,” said McInerney. “The rivets are heated up to 1,800 F and we've had a few issues with how this has affected the coating of the steel. As a result, some steel has had to be galvanized and painted on-site. Some of the work required revisions to meet historical requirements and at the same time meet today's codes and standards.”

Another challenge is the replacement of the steam line beneath the bridge that services local hospitals. This is a major part of the project, especially as it deals with temperature and pressure.

“We have to plan the replacement line carefully because once it leaves the bridge, it does a lot of twists and turns,” said McInerney. “It required a lot of reviews and analysis to make sure that it worked. As the new steam line was being installed, cutovers were required to transition the new to the old.”

Hazardous materials were also found during excavations to remove soil under the salt and pepper towers for upgrading the foundations.

“It was not foreseen,” said McInerney. “There were various levels of contamination and we changed our means and methods of work to keep some of the soil in place and remove the rest to proper disposal facilities.”

To avoid impacts on the subway during traffic shifts for new stages, WSC is utilizing temporary tracks on the road deck parallel to the two existing tracks (a shoo-fly) and uses them when work takes place close to or underneath the existing tracks.

Construction of the new pedestrian bridge connecting the Esplanade with Charles Circle began in November 2015, with work starting on the Esplanade side of Storrow Drive to the west of the existing bridge. It is scheduled to be complete in the summer of 2018.

Materials that can be recycled are being maximized.

WSC is using a wide variety of equipment, including gantry cranes manufactured specifically for the rehabilitation of the roadway spans of the Longfellow. Barges with cranes are used for rehabilitation work from the water, including cleaning and painting the steel arches and removal and reinstallation of the salt and pepper shaker towers.

Special MBTA tie plates are being used on the permanent track to mitigate vibration on the bridge from the red line trains. Special molds and casting processes are used to replicate the cast iron fascia plates, ornamental railing and MBTA fence posts. Specialty repair/restoration work is being performed on the bronze doors that will be reinstalled in each tower.