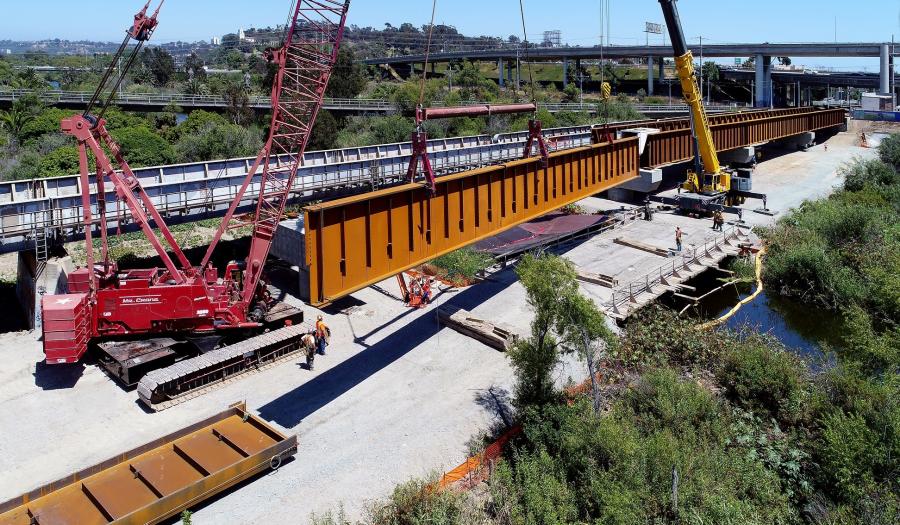 The demand for mass transit in California continues to grow with the expansion of the 351-mi. Los Angeles to San Diego to San Luis Obispo Rail Corridor (LOSSAN Corridor). The Corridor travels through a six-county coastal region in Southern California and is the second busiest intercity passenger rail corridor in the United States.

The LOSSAN Corridor service includes 41 stations and more than 150 daily passenger trains, with an annual ridership of more than 2.7 million on Amtrak Pacific Surfliner intercity trains, and 4.5 million on Metrolink and COASTER commuter trains.

The San Diego River Double Track (SDRDT) project is one of approximately 20 projects currently in progress along the San Diego County segment of the LOSSAN Corridor. This project involves the addition of a second main track between Control Point (CP) Tecolote (where Tecolote Road crosses the rail corridor) and CP Friar (north of the Old Town Transit Center).

Mid-Coast Transit Constructors of San Diego will lay a new 0.9-mi. track that will connect to existing double track at each end, resulting in a continuous 7-mi. double track segment for the southernmost portion of the LOSSAN corridor from CP Morena to Santa Fe Depot. 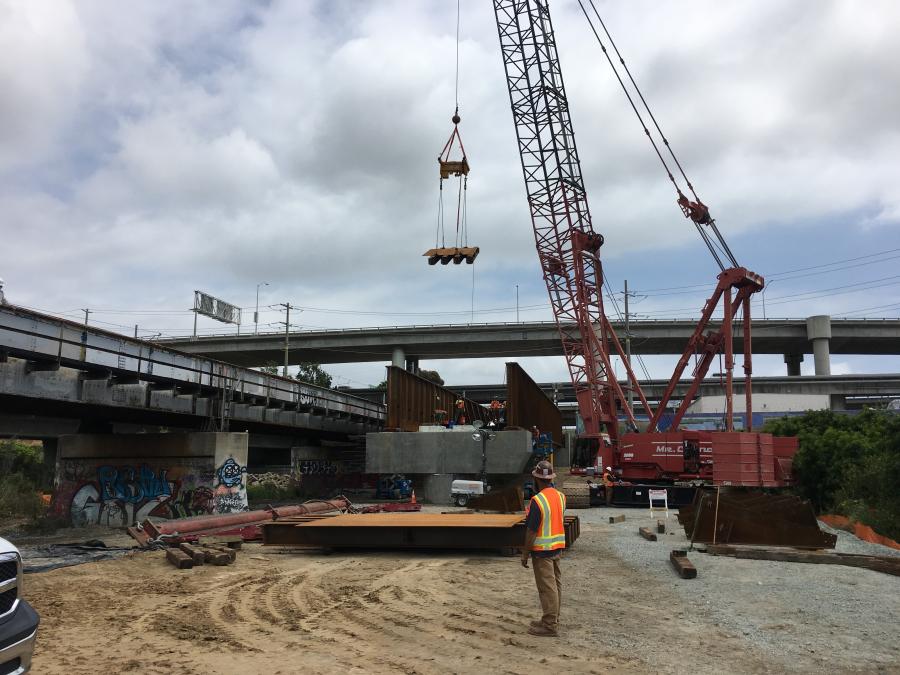 The project includes double tracking across the San Diego River with a new double track bridge, construction of associated site improvements, and signal modifications. The project is located in the city of San Diego within the right-of-way owned by the Metropolitan Transit System (MTS) on tracks managed and operated by the North County Transit District (NCTD).

Approximately 18 percent of the $82.4 million project is funded by federal sources. The San Diego Association of Governments (SANDAG) has leveraged that federal funding with $68 million from TransNet, the San Diego region's half-cent sales tax for transportation improvements. Construction of the SDRDT project started in 2016 and is expected to be completed in 2019.

Concurrent with this project, SANDAG is designing the Mid-Coast Corridor Transit Project, an 11-mi. extension of the San Diego Trolley within the same MTS right-of-way. SANDAG is coordinating closely between the two projects to ensure smooth construction and effective use of space and resources. The SDRDT project is being designed with sensitivity toward the natural resources of the San Diego River.

The new double track will be an integral part of the LOSSAN rail corridor, as it will serve as a vital link for passenger and freight trains in San Diego County and will be the only viable freight rail link between San Diego and the rest of the nation. This project is necessary to support growth in rail service demand while increasing reliability and maintaining safety. The existing single track from CP Tecolote to CP Friar negatively affects reliability of rail service in the corridor. Because there is only one track, trains are required to wait outside of the limits and take turns using the single track when trains meet or pass one another. This reduces the overall capacity of the system, resulting in increased travel time, reduced operational flexibility, and increased potential for delays.

AMTRAK and NCTD plan to increase the number of passenger trains along the LOSSAN corridor. This project will help to meet the expected increase in demand for railroad operations through this segment of the LOSSAN corridor; enhance railroad operational flexibility and schedule reliability; accommodate future increases in capacity; and achieve a good state of repair in this segment of the railroad.

“The new bridge was designed to minimize the environmental impacts by using larger girders which allow for longer spans and fewer piers in the river,” said Brad Helgason, senior transportation engineer, SANDAG. “When the project is all done, we'll have two new bridges to increase rail capacity and all the native vegetation will be restored.” 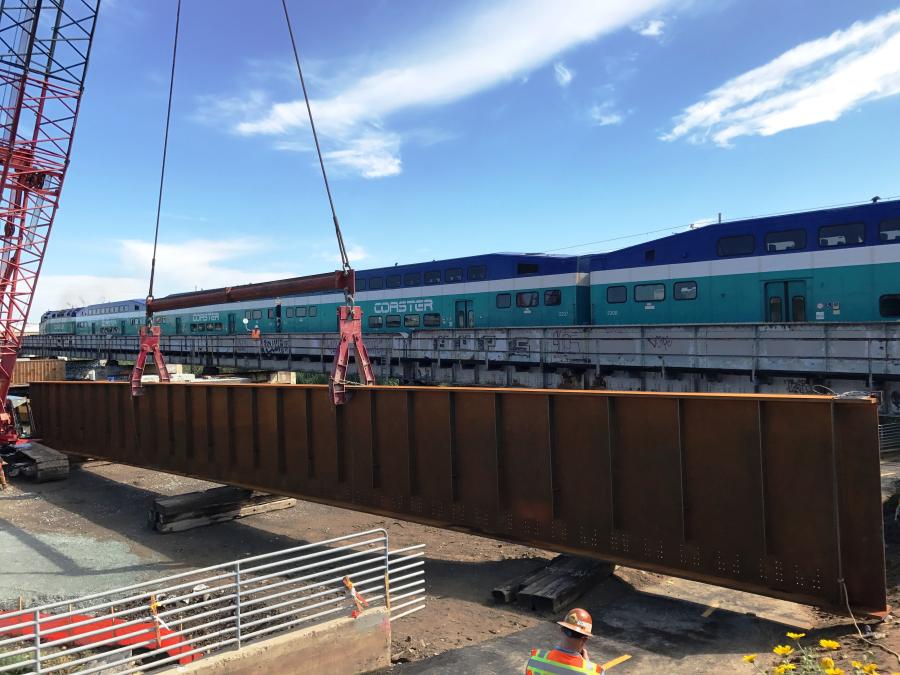 Some of the unique challenges on this project include working adjacent to an active rail line and limited working space between the right-of-way and rail line. Crews persevered through downpours while construction took place in the river basin which consisted of vacating the channel and rebuilding a berm.

In anticipation of these hurdles, Mid-Coast Transit Constructors coordinated with the rail operator and executed key construction activities during railroad closures. Additionally, careful procedures were designed for working in the river basin during rain events. The river basin has a history of flooding during the rainy season and the existing bridge has been washed out and rebuilt several times over the years. 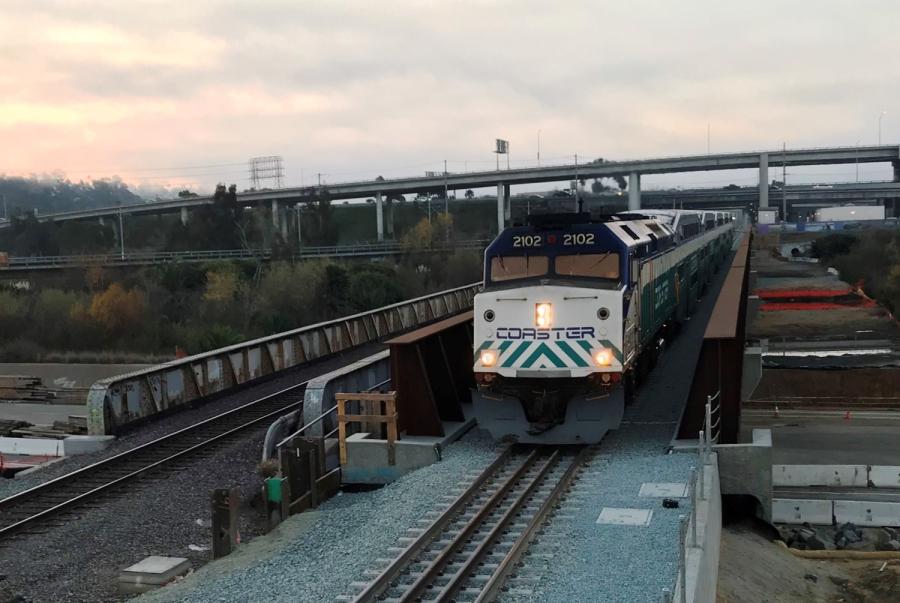 During the next 20 years, SANDAG plans to construct nearly $1 billion in improvements in the San Diego County section of the LOSSAN corridor, including a primary effort to double track the segment from Orange County to downtown San Diego. To date, 67 percent of the LOSSAN rail corridor within the county is double-tracked, up from 49 percent in 2008 when SANDAG first started the LOSSAN Capital Program. Because of the increased capacity, in November 2017 Amtrak added two trains per day between Los Angeles and San Diego, for a total of 12 daily round-trips.

Presently, 19.2 mi. of double-tracks are in design or under construction. Eventually, more than 97 percent of the corridor will be double tracked. Other infrastructure improvements along the LOSSAN corridor include bridge and track replacements, new platforms, pedestrian under-crossings, and other safety and operational enhancements.