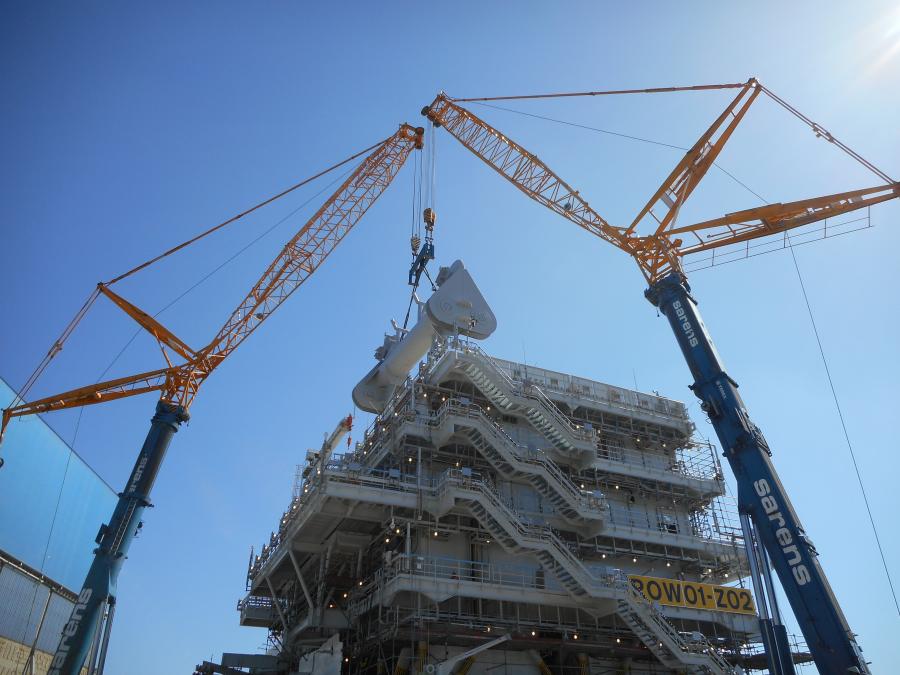 To avoid the potential of weight overload on one of the cranes, Sarens’ lift plan included positioning a 176-ton (160 t) capacity swivel beam in between the spreader bar and the cranes’ hook blocks.

International steel construction company, Iemants, constructed an offshore oil module for Fabricom at the company's Hoboken facility in Antwerp, Belgium. These massive modules, critical for the oil and gas production process, range in sizes reaching 82 ft. (25 m) high, 98 ft. (30 m) wide and 131 ft. (40 m) long and weigh up to 2,425 tons (2,200 t). Even with a full complement of equipment at Iemants' disposal, occasionally during module construction it is necessary to bring in heavy lifting specialists to safely pick especially heavy pieces and place them onto the module platform.

When the time came to lift and mount on top of the module a large spreader bar used to perform offshore lifting, Iemants worked with its lifting partner, The Sarens Group, to develop the most cost-effective and efficient lifting solution.

The advantage of the single crane option would have been that it required only one crane and crew to be mobilized. However, a crawler crane would require multiple days and more than 20 loads to transport the crane components necessary to configure it to meet 160-ton lift capacity at a 79-ft. radius.

“It would need at least 10 days to complete the entire project from mobilization to completing the lift with the single crane option,” said Van der Elst.

This was too long and costly for the module lift project.

Even though this option required two cranes to be mobilized, it offered significant time and money savings, according to the company. The nine-axle AC 700 all-terrain crane was driven to the job site with its complete 197 ft. (60 m) main telescoping boom installed, while meeting 13 tons (12 t) per-axle load limits to reduce the number of loads required for transport.

Even using the two cranes, this option would cut the number of loads approximately in half compared to mobilizing a crawler crane.

This is critical for the construction of an oil module in a depressed oil price market.

Sarens mobilized its first Terex AC 700 crane from its Wolvertem, Belgium, headquarters, plus eight trailers of supporting material, jib segments and counterweight to make the 17 mi. (27 km) trip to the Hoboken job site. The Terex crane reached highway speeds of 47 mph (75 km/h) to get from the yard to the project, and, once on site, its 8-axle steering allowed the crane to maneuver into position for lifting. Within a day, Sarens' four-person work crew transported the first all terrain crane to the job site, rigged it with 176 tons (160 t) of counterweight and the 98 ft. luffing fly jib, and had it ready for the lifting project.

On day two, the crane went to work lifting and positioning supporting equipment in preparation for placement of the spreader bar.

“The first crane on site placed the lifting supports, rigging for the platform and a radar mast,” said Van der Elst. “At the same time, we moved our second crane to the job site and had a different four-person crew prepare and position that AC 700 for the spreader bar lift.”

The morning of day three both cranes were in position for completing the critical lift. To avoid the potential of weight overload on one of the cranes, Sarens' lift plan included positioning a 176-ton capacity swivel beam in between the spreader bar and cranes' hook blocks.

“This provided perfect weight distribution of the load between the two cranes,” said Van der Elst.

To start the spreader bar lift, the two crane booms worked at a 72 ft. (22 m) radius, and, as the lift progressed, the boom radius decreased to 56 ft. (17 m) as the two cranes swiveled the load into position. While placing the spreader bar atop the module, both cranes were operating at a 79-ft. (24 m) radius, and the two booms were less than a couple of meters apart.

“The responsive controls of the AC 700 cranes give our operators very precise movements of the boom and load, which allows us to confidently complete intricate tandem lifts like this,” said Van der Elst.

With the lift complete, both four-person crews derigged their respective AC 700 cranes, and the lifting equipment convoy traveled back to Sarens' Wolvertem yard. In just three days, the dual crane option safely and efficiently placed the spreader bar plus supporting equipment onto the oil module, seven days faster than what was estimated for the single crane option. More importantly, going with a tandem approach saved Sarens' customer money, according to the company.