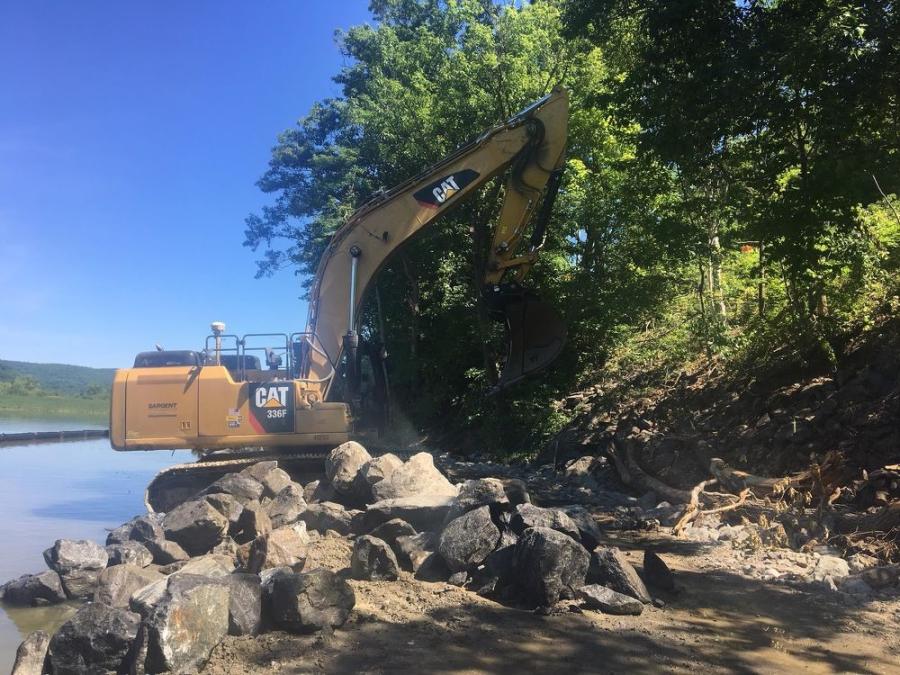 Route 12 is bordered by the Connecticut River on one side and railroad tracks on the other, making widening a difficult and potentially pricey project.

For more than a decade, stakeholders in New Hampshire's western towns of Walpole and Charleston have been trying to come up with a fix for an old rural stretch of highway plagued by numerous problems.

This spring, crews at long last began the work. The $14.8 million project was awarded to Sargent Corporation of Stillwater, Maine, with a completion date set for August 2020.

Route 12 runs 3 mi. between Walpole and Charleston with roughly 7,000 vehicles traveling the road daily. It is bordered by the Connecticut River on one side and railroad tracks on the other, making widening a difficult and potentially pricey project.

Guyette wasn't on staff at the time, but said, “I just know at one point I heard $40 million just to go three miles.” 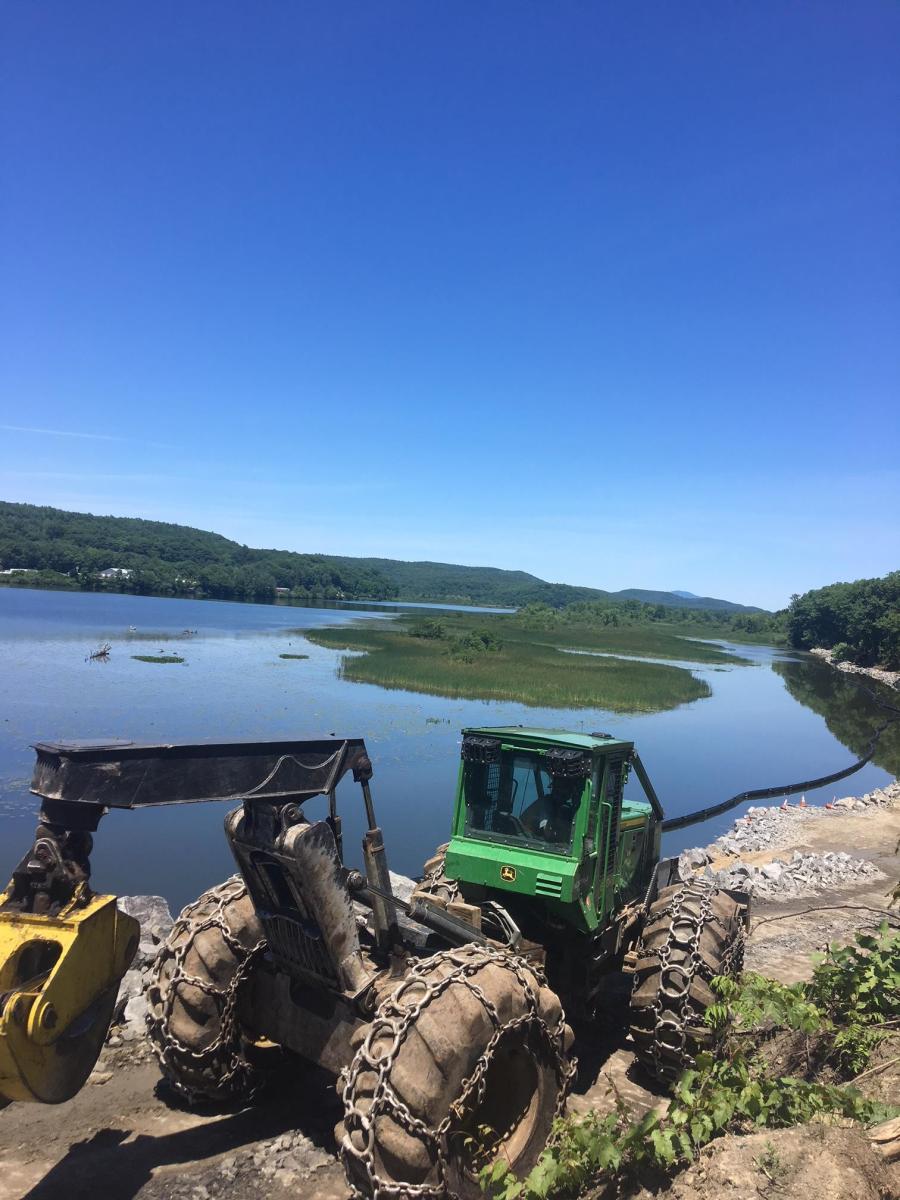 The option of widening the road toward the Connecticut River was discouraged for fear of damaging the river. In the end, however, that's the option NHDOT chose, putting in a place an extensive plan to protect the river. That's the work crews are busy with now.

“We have to keep the river clean,” said Tim LePlage, Sargent site superintendent. “We are armoring 6,000 feet of the slope and putting in 80,000 cubic yards of riprap. We're filling in the river. The toe is out in some places 25 feet from shore. We're changing the shoreline there.

“We have a turbidity curtain anchored in the river. It keeps the silt from traveling down river. We're containing it on site. There are floats on top of it. There is some curtain that has a tail up to 25 feet deep in the river. You have to put blocks and weights to hold it down so the current doesn't move it.”

Once the steep slope is armored, crews will be able to widen the road to 11 ft. lanes with 4- to 5-ft. shoulders.

“The challenge is they've got to build this access down to the river,” said Guyette. “They have to take all the trees down on the existing slope. Then they have to have the means to get them out of there. That's why they're building stone, so they can get trees out. Then, they'll continue putting down stone.” 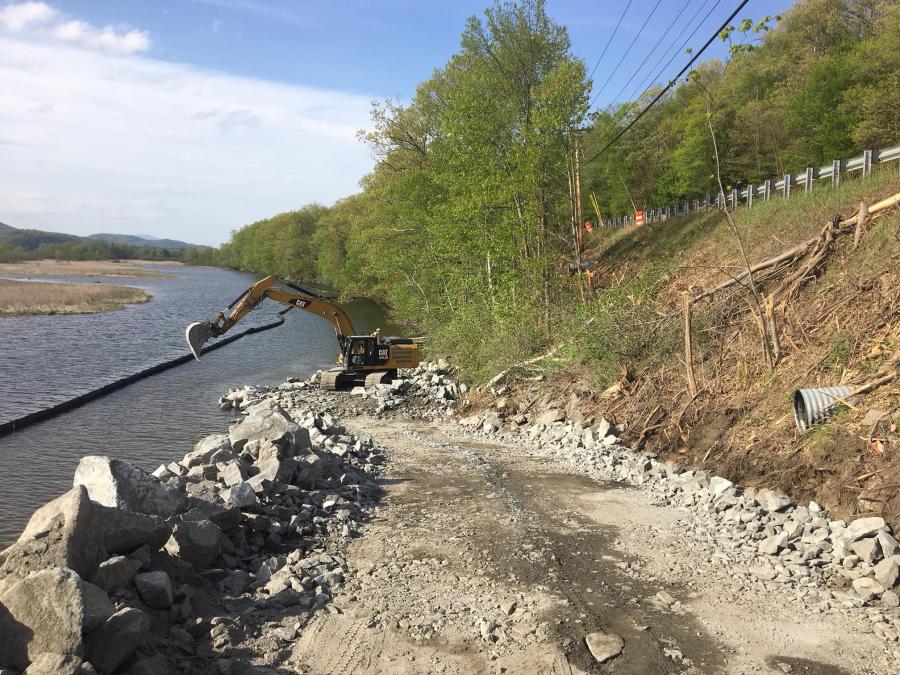 The DOT is trying something new on this project, which makes for an additional challenge for Sargent, Guyette said.

“We're putting down infiltration stone BMP for two-thirds of this road bed,” Guyette said. “The first layer is going to be clean, 18-inch infiltration stone. What it is going to do is treat the water before it goes into the rest of the world. This water is going to come off surface of the road, have a place to settle and then will continue down the slope. It's new to us.

“This is one lane alternating traffic and you have to put fabric down and keep the stone clean, then cover it and go forward. He's got to build one side of the road for a ways and then the other side. Everything has to be paved in a timely manner. So again, that's a challenge. We're doing this to maintain water quality. There is no room here, either with the railroad on one side and the Connecticut River on the other. There is no room for even building temporary roads. We're pretty much constrained. That's one of the hardest parts, to keep traffic flowing. We have no room for temporary traffic.”

LePlage expects the river work will continue through the summer.

“Hopefully, we can start doing pipe shortly. In 2019, we'll be doing box cutting, graveling and paving in sections. We're going to have to shut down by winter. Due to the nature of the work, you can't do the gravel in the winter with snow. And we'll try to be out of river by winter. That's why that's pretty much all we're doing now.”