SC Rock has called on May Heavy Equipment to help supply it with the various machines it needs to do this type of heavy work. 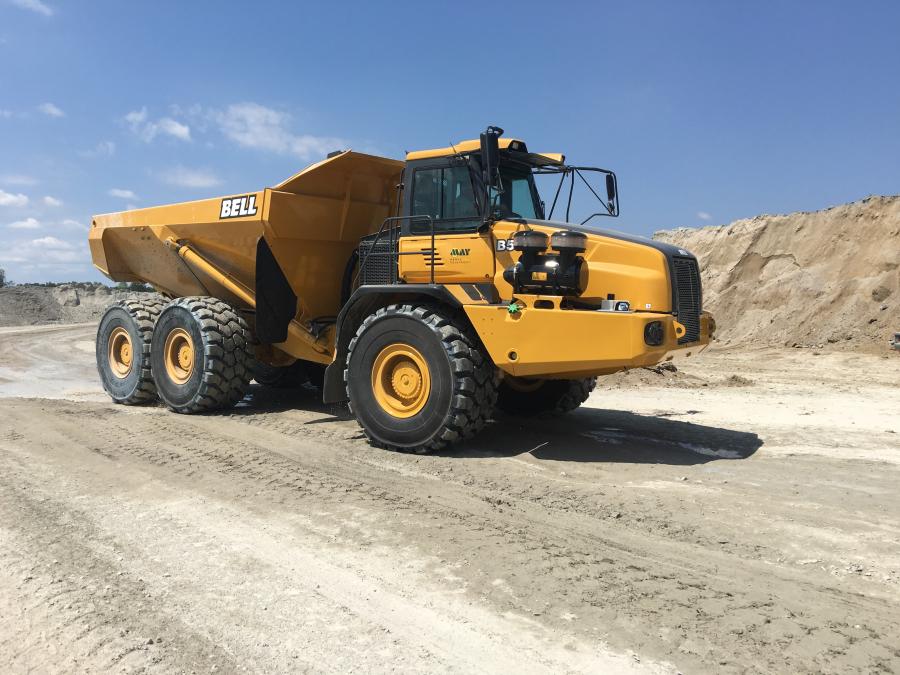 Bill Griste wanted to get back into running an aggregate rock mining and distribution outfit again.

He knew that his former Carolina Aggregate Products' Goretown Mine had many millions of tons of marine limestone buried within the earth and that rock made for excellent road-building material throughout both Carolinas.

He first opened the Goretown Mine near Loris, S.C., in 1998 after discovering the deposit. After several years, he sold it to an Alabama-based company, Grand Strand Aggregates, before re-acquiring it in 2014 and re-naming it SC Rock LLC.

“I wanted to make a successful, prosperous business. We are sitting on about 70 million tons of deposit here,” Griste said. “The math convinced me to go back into this business.”

He just needed the right equipment to process and haul the rock for SC Rock to be successful.

The mine already had machinery from May Heavy Equipment, with locations throughout the two Carolinas, and Griste immediately realized the value of maintaining that business relationship.

Now, due to May's recommendation of the 50-ton (45.4 t) Bell articulated dump truck, SC Rock now owns two workhorses that it needs to keep the mine successful for several more decades.

The company's mine, processing plant and product yard can handle from 400,000 to 1 million tons (362,873 to 907,184 t) per year of various sized rock. That rock is used in concrete, pipe bedding, asphalt and road building, among other things.

When the rock is mined it goes through the company's processing plant, which screens and crushes it before it is made into either a clean stone product or road base. Several washed aggregate products are made, such as 89s for concrete companies, 5s for septic tank beds and French drains, 57s for water and sewer projects and washed screenings for asphalt and concrete. The unwashed material is processed into fine base, commercial base or NCDOT or SCDOT spec base.

“We have the capability to make entrance stone, too, which is a 1 5/8-inch-plus stone product,” said David Buffkin, SC Rock. “It's a new spec product that we have for road-entry stone. Additionally, we make ballast stone, surge stone and rip rap. We also have beautiful landscaping boulders.”

“We are a state-approved aggregate supply source for North Carolina and South Carolina, so our material can be used for anything that the states approve for aggregate, like concrete and asphalt on highways and major roads,” said Griste. “Plus, we do a lot of private work for both developers and individuals.”

SC Rock's Loris location is in the northeast corner of South Carolina, near the Myrtle Beach area and just a few miles from the Atlantic Ocean. Many of the company's products are used on the region's roads, which are often in need of repair due to high tourist traffic and the coastal climate.

One of the current road projects being served by Griste's company is a widening of S.C. Highway 707 near the south end of S.C. Highway 31, also known as the Carolina Bays Parkway, just to the west of Myrtle Beach. The Goretown Mine also supplied stone for the Parkway itself during its construction.

“A lot of the roads around here are being built using a cement-treated base specified by the state,” he said. “That base is first put in place under the asphalt. We supply base for that kind of work a good bit. One of the benefits of our material is that it requires less cement than, say, a granite-based material, making it more economical, but with tremendous strength.”

Griste added that the durability of his mine's product is because it is a recrystallized limestone material that seems to get tighter and more compacted the longer it is used, with a cement-like quality to it.

The very shape of the material offered by SC Rock is a unique feature, as well, in that it has, according to Griste, an almost “popcorn shape.” The surface area of the rock is irregular and rough to a degree that when all the particles are mixed together they assume an interlocking capability, more so than a lot of the granite used in the area.

“Another great feature of our material is that it is fairly porous, so if you want stone that will drain water, we have it. This is a pretty wet area that we are building in so our customers need a material that will help stabilize the ground, while also letting water pass through.”

“With May, you couldn't ask for a better relationship between a company like ours and a vendor,” Griste said. “They have been right beside us when we have needed them. If we have a problem they help us solve it. Plus, they are always fair as far as their pricing is concerned.”

The decision to obtain the Bell trucks was reached after consultation with May and in consideration of SC Rock's needs.

“We are getting ready to open into a new area that will take us further from the plant, so we needed to utilize something that's going to be more cost-effective than smaller trucks,” Griste said. “And, of course, fuel costs are always a determining factor. In talking with May they recommended the Bell trucks and in looking at some of the specs and their production so far, it looks like they will do the job.”

The Bell trucks bring material from the pit and move it into SC Rock's feed hoppers, according to Buffkin. He echoed Griste in saying that the new haulers are also vital in getting product to more distant areas from the plant and added that their hope is that they can one day have only 50-ton trucks in their hauling fleet.

Among the other equipment moving around SC Rock's 700-acre spread are two Kawasaki loaders and a pair of Komatsu D65 dozers, a Caterpillar excavator and a Cat 30-ton (27.2 t) articulated dump truck, JLG products and a Terex truck, as well as several mining machines.

“The Kawasaki loaders are a 95z and a 115Z,” Buffkin said. “They both have been working well and with the type of material we have we can use these as two-pass machines, meaning we can get one loaded into a truck in two passes.”

SC Rock also has a Hyundai 480LC-9a excavator that it uses in tandem with a Caterpillar 345 in order to increase its loading production, he said.

“A lot of times we use them to load the raw material from the pit going back to the plant and it can help us eliminate making too many passes because the Hyundai has a 4.25-cubic-yard bucket on it.”

The company's other off-road trucks move the limestone, extracted by two Manitowoc 4600 draglines from under water, to the crushing plant after the rock has been allowed to properly dry. Those trucks, supplied by May, include the mine's two Bells.

“All of these machines have given us great service,” Griste said. “We have lots of different kinds and makes and May has the capability to work on all them when we need them to. We have our own mechanics, but when we have to have something done that is beyond what we feel we can do, we call them in to solve the problem.

“We're happy that they have helped us get back in a position where we can continue to grow in the marketplace for many years.”