Former and current commissioners joined retired and current employees gathered on Park Street for the celebration. 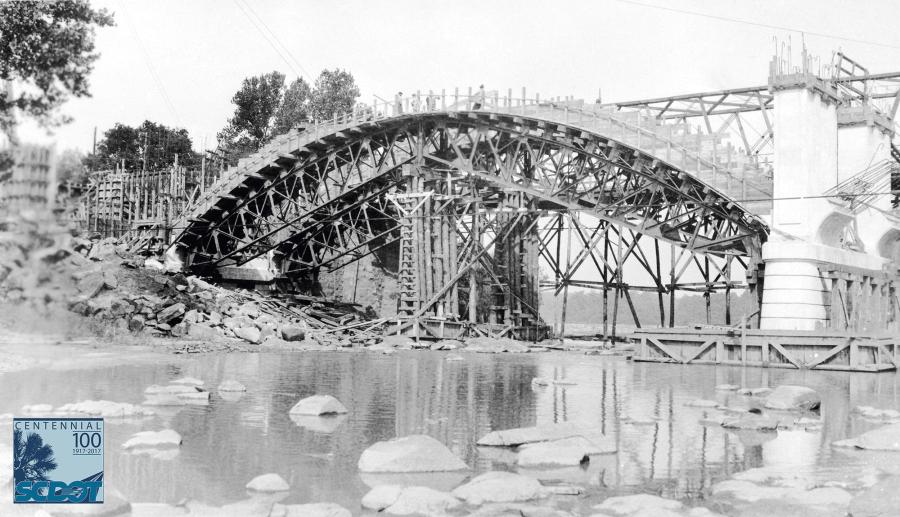 The Gervais Street Bridge under construction in Columbia in 1927. (SCDOT Photo Archive)

In a historic ceremony in front of the Headquarters building in Columbia, SCDOT commemorated 100 years of service to South Carolina on March 10.

“It is a very special day for us,” said Secretary of Transportation Christy A. Hall to begin the Centennial Celebration program, which was streamed online for DOT employees across the state.

Former and current commissioners joined retired and current employees gathered on Park Street, where vintage highway signs, equipment including a 1930s gasoline pump, and heavy machinery made up the backdrop on the sunshine filled morning.

“This is amazing,” said Gary Loftus, as he joined other commissioners across decades for a group photograph. Loftus, of Horry County, served as a Commissioner from 1994 to 1996.

“On this very day 100 years ago, Governor Richard Manning signed into the law a bill that created the department,” Hall said. “In those very early days the Commission was comprised of a civil engineer, a newspaper editor…and three ranking engineering professors from The Citadel, Clemson and USC — that was our very first Commission.”

The Governor proclaimed March 10, 2017, as “South Carolina Department of Transportation Centennial Celebration Day” and “encouraged all South Carolinians to recognize the agency for its work on behalf of the citizens of the Palmetto State.”

“This is a great day as we celebrate the past and look to the future,” Willard said. “The next 100 years holds many challenges. Advancements in data collection and technology will provide a transportation network that will look different than the one we see today.

“Autonomous vehicles are here, and mass transit will play a more important role as our urban areas continue to grow,” Willard said, adding that innovation will make our pavement stronger and future road designs will support “methods of travel that we can only imagine.”

“Safety, as always, will be our driving force.”

Willard said, “As a team, we must be innovative; bold and yet humble. We all represent this great institution and we can only accomplish our mission, as our secretary so proudly states, with an 'All In' effort.”

Willard concluded his remarks by saying, “The people of this state want good roads — it is just that simple. The Commission stands with you. We challenge you to continue to make this organization better every day.

“You are our backbone; stand straight, be proud, for you are the SCDOT.”

Partnerships have been a key element of the department's success throughout the years, Hall said, as she lauded the Federal Highway Administration.

Lawton, of FHWA, said, “We cannot successfully deliver the federal aid program without our partners… I look forward to another 100 years of outstanding partnership.”

Hall provided highlights of the Department's history, beginning with the first employee hired in 1917, State Highway Engineer. J. Roy Pennell. He received a car and an adding machine.

The first state highway system had a total of just over 3,000 mi.

The agency suffered growing pains almost immediately. With the country entering World War I, senior ranking members including the state highway engineer left to join the military. Equipment and manpower were in short supply.

After the war, the early mission of the agency was providing the infrastructure for economic development in our state through farm to market roads.

World War II also brought challenges at home as road-building supplies and manpower were short. But many military bases and war material factories sprung up in South Carolina and the demand to widen roads and build new roads increased because of the wartime efforts.

After the war, Americans wanted mobility. “Business and industry wanted to expand and establish many locations in our great states,” Hall said. “Tourists discovered South Carolina as a vacation destination. Numerous interstate highways began to crisscross our state…and dramatically increase access. The growth has never stopped.”

From its humble beginning in 1917, SCDOT has grown to manage the 4th largest state-maintained highway system in the nation, with 42,000 mi. The agency manages and operates 8,400 bridges.

SCDOT also is recognized as having the lowest funding allocation nationally at $35,000 per mile.

“While there have been many changes at the Department — I might add many reforms — our core mission has never changed since 1917,” Hall said

Hall also announced the launch of SCDOT's Centennial website, where the public can learn more about the agency's history: www.scdot100.org.

Safe, efficient and adequate transportation networks are absolutely essential to the prosperity of our great state and impact the lives of our citizens, businesses and visitors every single day, she said.

“As we move forward from this celebration day into our second century, I have every confidence that SCDOT will continue to work hard in service to our great state,” Hall said.

“I have faith in the men and women of SCDOT and I'm often in awe of their dedication to this great state. I'd like to say thank you to the employees of the agency. It's truly an honor to serve with you. Your talents and abilities are on full display during natural disasters and are frequently recognized by many outside this agency as simply amazing.

“I know that same level of dedication is here every single day to do the best we can with the resources that are available.

“Our partners at FHWA, the cities, counties, contractors, engineering service providers…All of us play a role in making a difference.

“It is truly a great day in South Carolina.” Hall said.