School's Demolition Reveals Its Past 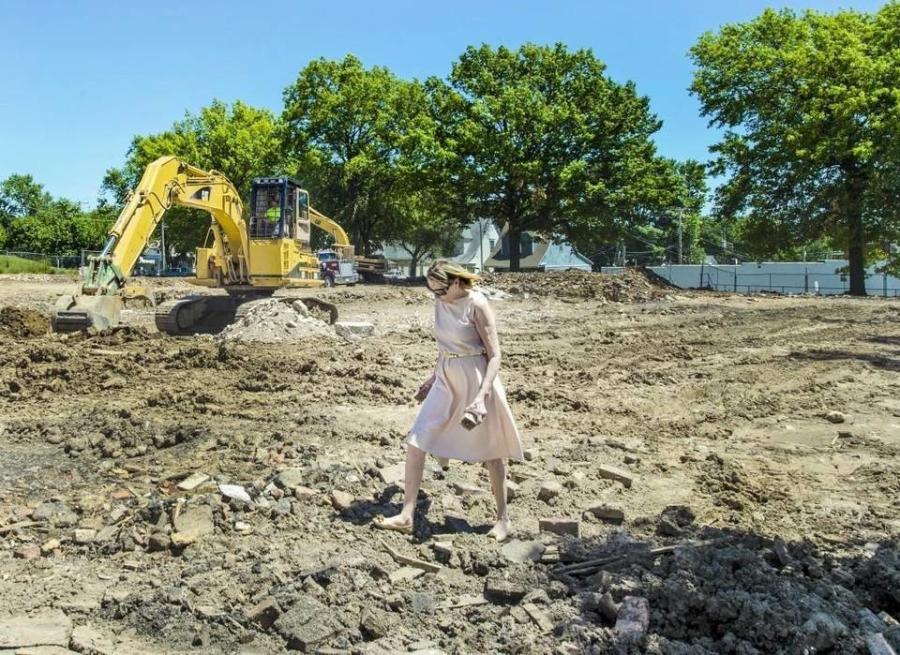 Image courtesy of he Kansas City Star. Much of the limestone from the school was also saved for monuments elsewhere in the surrounding historic neighborhoods or for the trailhead in Indian Mound Park.

It once had, which is why the cache of mostly paper artifacts almost wasn't left behind to be studied some 115-plus years later.

A first attempt to assemble a telling collection of what was then the Oakley School, and later became the Thacher School, was scuttled when the box was stolen.

The school's principal, in a note left in the box, said it had been stolen for a time - probably by someone looking to lift the silver dollar inside.

On a recent Saturday morning, the metal box that had been stored within the cornerstone of the building was opened for the first time since 1900.

This time, no cash rested inside. Instead, the roughly 1-foot cube held newspapers of the day _ The Kansas City Times and the Kansas City Journal, with an article about the once-stolen box circled - along with classroom rosters penned in the distinctive cursive of elementary students.

“It revealed a little of the importance of penmanship of the day,” said Denise Morrison, the director of collections and curatorial services at the Kansas City Museum. “There were very few printed materials. It was mostly handwritten.”

The Kansas City Star (http://bit.ly/1mLQwbD ) reports that much of the content will be on display at the Kansas City Museum through Jan. 16. The box now belongs to the museum.

The Thacher School at Independence and Quincy avenues fell to the wrecking ball last summer, ending a long battle between neighborhood preservationists and Kansas City Public Schools, which is expanding the grounds of Northeast Middle School.

Archways were dismantled by hand, the materials set aside for an entryway to planned sports fields. Much of the limestone from the school was also saved for monuments elsewhere in the surrounding historic neighborhoods or for the trailhead in Indian Mound Park.

The tearing apart also revealed the box, something Morrison described less as a time capsule and more as a &#8220blessing” of the original school construction. No instructions were left, for instance, that it be opened at any particular time. And after all, it was buried into a cornerstone.

“It was more just a way to communicate with the future without a future intended audience,” Morrison said. “They were trying to give a sense of what was going on in their world.”

Also stashed away: a three-page, handwritten student newspaper, the Oakley Record; some students' drawings; photographs, although only their cardboard backings survived the generations; and a booklet describing the new Kansas City Public Library that had opened in 1899.

And it held a copy of “The Boy,” a sort of newsletter published by the Illinois State Reformatory.

“I can't quite explain that one,” Morrison said.