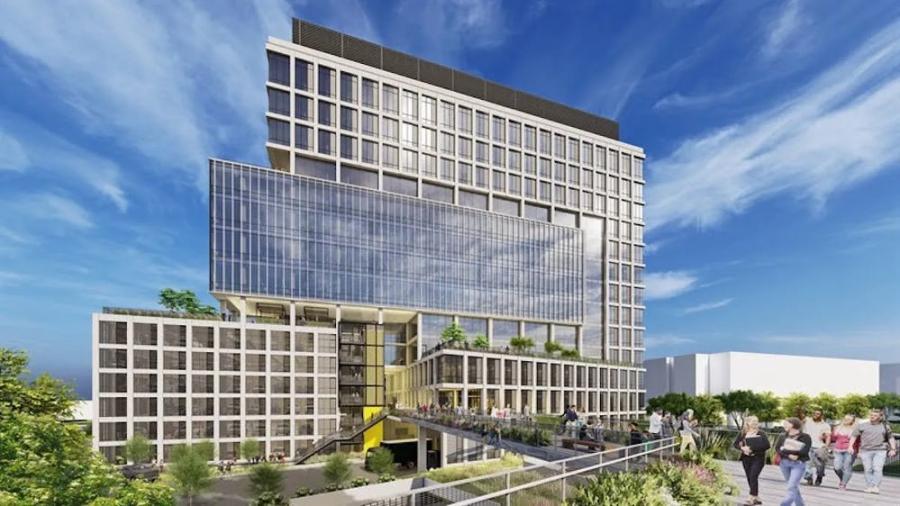 The first phase of Science Square, the redevelopment of the former Technology Enterprise Park in downtown Atlanta, is under way after a groundbreaking ceremony in late March, according to What Now Atlanta, an online community news service.

Trammell Crow Company (TCC), a national commercial real estate developer and investor, along with its residential subsidiary, High Street Residential (HSR) and Georgia Advanced Technology Ventures, a cooperative organization of the Georgia Institute of Technology, have closed on ground leases and are preparing to begin construction on the project, adjacent to Georgia Tech's Midtown Atlanta campus.

"With the ground-up development of Science Square, we will have the ability to provide the infrastructure needed to capture the increasing demand for lab space generated from the growth of research and commercialization within the life science industry," Kelly Fox, executive vice president of administration and finance at Georgia Tech, said in a press release.

"This catalytic development will solidify Atlanta's position as one of the top emerging life sciences markets nationally, bringing with it new jobs, economic benefits, and much-needed housing and amenities to Georgia Tech's neighboring communities."

What Now Atlanta reported that the first phase of the development at Science Square will include TCC's Science Square Labs, a speculative 364,740-sq.-ft., Class A lab/office tower and HSR's 280-unit residential building, the firm's first residential project in the Georgia capital city, which will include shared parking and ground-floor retail space.

Science Square Labs has been designed by Perkins + Will in Chicago to be a purpose-built, 13-story tower that will offer up to 35,558-sq.-ft. of floor plates made for the ultramodern lab and clean-room.

The facility also will feature ground-floor retail space and an impressive collection of amenities, including a fitness center, conference space, and an indoor/outdoor tenant lounge with a catering kitchen, which can be reserved for special events and opens onto a deck with views of the Atlanta skyline.

What Now Atlanta noted that TCC is seeking LEED and WELL Certifications and plans to incorporate View Dynamic Glass, which controls UV and visible light from entering the building without blinds.

Additionally, the project will feature a 38,000-sq.ft. solar panel array atop the parking garage installed by Cherry Street Energy.

Science Square Labs is slated to be completed in early 2024.

As part of the development, TCC is providing a $500,000 Community Educational Grant to support job training, education and outreach to help neighboring community members develop the skills they need to work in the life sciences industry.

"Science Square offers unparalleled opportunities for life sciences innovators to tap into Atlanta's diverse talent base," Katherine Lynch, senior vice president of TCC, explained in the company's news release. "TCC is excited to bring much-needed lab infrastructure in a way that positions Atlanta as the model life sciences ecosystem of the future."

Designed by Atlanta's Rule Joy Trammell + Rubio, HSR's Class A residential building will rise 14 stories and feature a mix of one-, two- and three-bedroom apartments. An affordable housing component and ground-floor retail also is to be a part of the residential building.

The first units are planned to deliver in early 2024, with full completion later that year, HSR noted.

"Our team is excited to kick off High Street Residential's first multifamily development in the Atlanta region," said Scott Kirchhoff, senior vice president of HSR. "This project will provide much-needed new housing — including affordable units — and retail within West Atlanta, adjacent to Georgia Tech's campus. [It] is just the beginning of the impressive 16-acre mixed-use Science Square development, which we believe will have a positive and lasting impact on Atlanta and the surrounding neighborhood."

Brasfield & Gorrie, based in Birmingham, Ala., is the general contractor for the entire Science Square development.

Another in a series of developments aimed at intown college students is in the works between Centennial Olympic Park and Georgia Tech's campus, although details about the project are scarce.

According to renderings obtained by Urbanize Atlanta, the Dezhu US development is being planned for a vacant site a block from the university's Bobby Dodd Stadium, just south of North Avenue. Atlanta's SSOE/Stevens & Wilkinson drew plans that show the building would rise eight stories at 564 Centennial Olympic Park Dr. NW.

Frank Chen, COO of Bolton Atlanta LP and Dezhu US — a Norcross, Ga.-based subsidiary of Dezhu China — confirmed to Urbanize Atlanta that the project would be student housing but was not yet able to provide further details. Chen told the online news site that it is still in the planning stages.

Another tower project aimed at the Yellow Jacket student demographic — the 19-story Hub Atlanta — is being built near the corner of 10th and Spring streets in Midtown, Urbanize Atlanta said in its April 4 report.