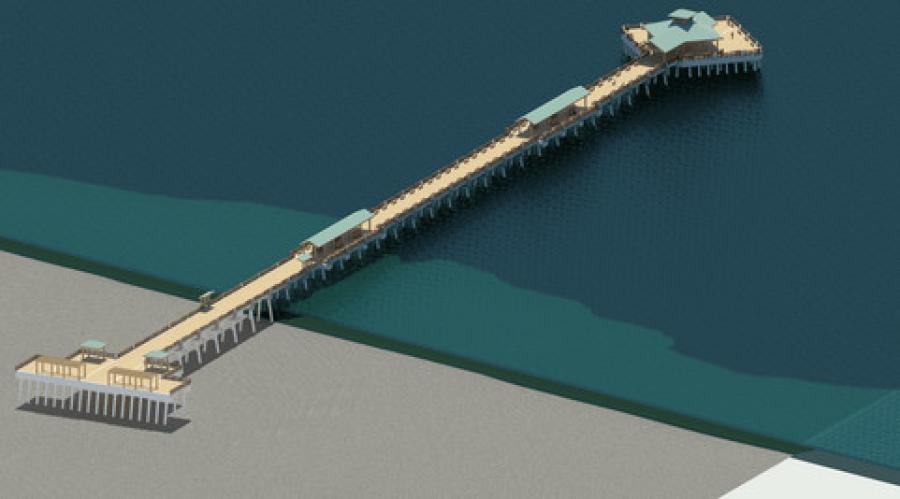 Oct. 18 marked the start of an extended closure of the iconic Edwin S. Taylor Folly Beach Fishing Pier along the Atlantic Coast of South Carolina.

The span closed that morning for a two-year replacement project, reported the Charleston Post and Courier.

A Lowcountry landmark since 1995, the pier has since become heavily damaged by shipworms. Building a new pier is a better long-term solution than continuously repairing damaged pilings, the Charleston County Park and Recreation Commission (PRC) decided.

Mayor Tim Goodwin said it's going to be great to see the new pier in place for, hopefully, 30 or 40 years of use.

The new pier will have traditional wood decking and rails. Concrete piles underneath will hold up better in the ocean environment, according to Bruce Wright, Charleston County Parks' senior project manager.

The structure will look a lot like the current one, with fishing stations and an architectural diamond at the end. In addition, the new pier will include unobstructed 360-degree views of the ocean, more covered fishing areas and better pedestrian access.

Construction on the new 1,039-ft. structure will occur in phases, and officials said it is scheduled to open in spring 2023. The project will cost $14 million.

Sarah Reynolds, a spokeswoman of PRC, said before work began, fencing had already gone up on the pier area and the parking lot was prepared. A construction trailer and a crane also were nearby, and consultants have been surveying and taking photos for precondition assessments, she said.

On Oct. 19, Cape Romain Contractors Inc., in nearby Wando, S.C., northeast of Charleston, began demolishing the old apron section of the pier. At the same time, the Folly Pier parking lot closed, as did the beach access from the pier property, according to information supplied by Reynolds via email.