More drivers crash in Malfunction Junction than any other comparable freeway system in South Carolina, according to SCDOT’s website.

A crucial hurdle was cleared in late September in the process to begin remaking the area known as "Malfunction Junction" near Columbia, S.C.

The U.S. Army Corps of Engineers (USACE) granted a permit to allow the South Carolina Department of Transportation (SCDOT) to construct all phases of the Carolina Crossroads project.

The roadwork project will reconstruct and improve 14 mi. of highways at the junctions of Interstate 20, Interstate 26 and Interstate 126, SCDOT officials said in news release.

Plans have been in the works for years to fix and upgrade the highly trafficked and heavily congested interstate corridor, and the project is estimated to cost $1.6 billion, according to the release.

The 15-year permit from the USACE is the last major federal approval for the project's construction, which will be done in five phases, SCDOT officials said. Construction of Phases 1 and 2, on I-126 at Colonial Life Boulevard and I-20 at Broad River Road, are set to begin in 2021.

SCDOT said steps have already been taken to begin the project, including buying land, securing environmental permits and working with utility companies.

"We appreciate the U.S. Army Corps of Engineers' thorough and expert work on this project and its commitment to working with all stakeholders involved to significantly improve the mobility and safety of our state's citizens," SCDOT Secretary Christy Hall said in the release.

"Our ability to obtain the permit in just nine months is a testament to the Corps' dedicated staff members and the strong working relationship we have with them."

Upon project completion, the area where tens of thousands of drivers travel on a daily basis will have seven reconstructed interchanges, including the replacement of cloverleaf loops with smoothly flowing directional ramps; additional lanes in each direction on I-26; 12-ft. inside shoulders for emergency vehicles; and longer, separated exits, officials said.

The project is designed with future population growth in mind, through 2040 projections and beyond, according to the release. It will reduce traffic jams, and create "a safer, more mobile Columbia," SCDOT officials said.

More drivers crash in Malfunction Junction than any other comparable freeway system in South Carolina, according to SCDOT's website.

In 2017, the state adopted a gas tax increase of two cents a year for six years, to help pay for road improvements in SCDOT's 10-Year Plan. In July, there was a two cent hike on the cost of fuel for the fourth consecutive year, raising the overall tax to 24 cents per gallon.

A penny generates approximately $34 million for roads, according to SCDOT.

"Carolina Crossroads is the second of the major interstate interchange projects being made possible by the General Assembly's decision to commit more needed resources to rebuilding the state's roads and bridges," Hall said. "We're putting those resources to good and quick use to ensure easy movement of goods for our businesses and the safety and mobility of our citizens."

SCDOT officials said the other primary traffic congestion "pinch points" being addressed by the 10-Year Plan to improve the quality of the state's roads are the newly reconstructed I-85/I-385 interchange in Greenville and the I-26/I-526 interchange in Charleston, currently in the planning phase. 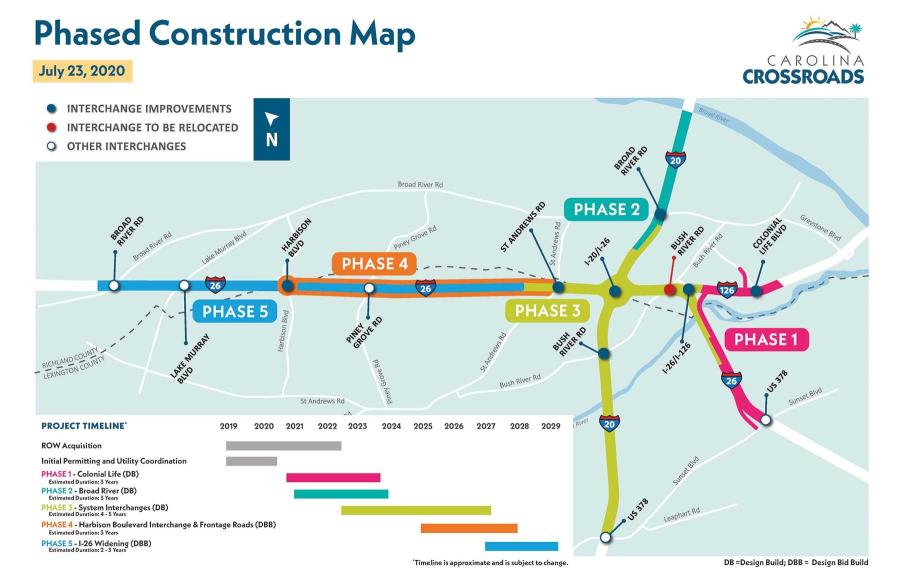