SDDOT's Mount Rushmore Road Project to Wrap Up This Spring

The new road infrastructure has a lifespan of 40-plus years and will be able to handle traffic demands into the foreseeable future. 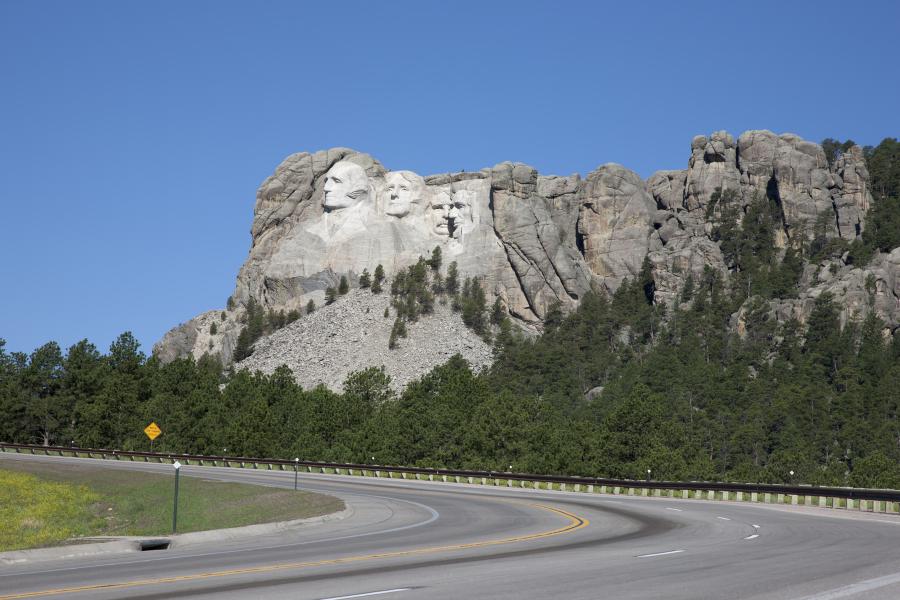 Phase 3 — the final phase — of the South Dakota Department of Transportation's (SDDOT) $24 million Mount Rushmore Road reconstruction project in Rapid City, which is being performed by Complete Concrete Inc., is well under way.

Phase 3 — the final phase — of the South Dakota Department of Transportation's (SDDOT) $24 million Mount Rushmore Road reconstruction project in Rapid City, which is being performed by Complete Concrete Inc., is well under way.

The remaining work, which will start in the spring and end in May, will have crews install a concrete median, finish the landscaping, and install the permanent striping. The project was designed and constructed in three phases.

Phase 1 — US 16 from the end of the divided segment on the south side of Rapid City to Flormann Street, was completed by Reede Construction in the spring of 2016. Phase 2, which included Mt. Rushmore Road from Saint James Street to Omaha Street, also dealt with urban grading, storm sewer, curb and gutter, sidewalk, lighting, signals and PCCP surfacing from Saint James Street to Kansas City Street, and minor joint and spall repair from Kansas City to Omaha. This phase, also done by Reede Construction, was completed in the spring of 2017.

The work took place within the city in an area with many hotels and businesses and adjacent residential areas, which presented many challenges for the construction. The four-lane north-south road — two lanes in each direction — is considered a gateway to the Black Hills and the Mount Rushmore national monument.

“Pavement repairs were done in 1998,” said John Van Beek, P.E., president of Ferber Engineering Company Inc, which designed the new road and infrastructure and whose firm is handling communications for the SDDOT project, “but the pavement is in poor condition throughout and the road had to be replaced. Although there were no fatal accidents between 2009-11, there were 56 injuries and 112 incidents of property damage. This is a well-travelled route and safety is major concern that is being addressed.”

A corridor study was completed by the Rapid City MPO with significant public involvement, which helped identify issues and goals including increasing lane widths from 10 to 11 ft. to have consistent lane widths, incorporate features allowing for landscaping and beautification, improvements for storm drainage, installing new roadway lighting and traffic signals and replacing aged water and sanitary sewers.

“Improving existing green space was important,” said Van Beek, “as was enhancing the South Entry into the community and softening the streetscape with trees and bushes.”

The new road infrastructure has a lifespan of 40-plus years and will be able to handle traffic demands into the foreseeable future.

As the work progressed, it had an impact on local traffic and businesses, but SDDOT made sure that traffic flowed, people and tourists had access to businesses, and that pedestrians — seniors and children — could safely cross the streets during the construction and congestion that arose from it.

These measures included the creation of the Mt. Rushmore Road Reconstruction Special Business Access area, which had off-site parking/pickup areas.

Rebuilding a key road within a city and not impacting traffic and maintaining business access is never easy.

“Even more important than the Special Business Access Area was effective communication between the SDDOT, the contractors and the affected landowners,” said Van Beek. “One of the key factors of maintaining effective access was the involvement of a local business group called the Mt. Rushmore Road Group. The organization created a construction survival guide and distributed it to its membership. The group holds monthly meetings which were attended by project leaders – and proved to be an asset throughout construction.”

Dave Buck, Complete Concrete's project manager, is pleased with the work that his crews and subcontractors have executed.

“Everybody did an excellent job and they all know that,” he said. “We were pretty happy with the subcontractors that we had, who are people that we have worked with in the past. Everything went according to our overall master schedule. We had originally planned on opening up the road around Thanksgiving and we were about 3 and-a-half days beyond that.”

The subcontractors, which were part of the nearly 30 people on site on peak days, included many local firms.

Because the work is taking place within a city, there were no night operations.

“The challenges were working in heavy traffic, a lack of work space due to the traffic and maintaining access to businesses at all times,” said Buck. “We had a grade school right in the middle of the project, so we had to keep the kids safe as they crossed through the project area.”

The work zone covered eight city blocks, in which everything was replaced —roads, medians, and water, sewer and storm water pipes , as well as infrastructure.

The 6 to 8 in. water mains that were removed were installed between 1969 to 1988, and were replaced with 12 in. pipes that maintain current service. The streetscape work included burying overhead utilities and installing median landscaping.

“We had off-site storage for materials and hauled them in as needed,” said Buck. “We never really had an equipment staging area —everything had to be staged for the project itself. Pre-planning was essential. As you needed pipe, you had to bring it in as it was being installed. When there was enough room, we had multiple crews.

“With the use of flaggers,” he said, “we were able to get trucks on and out of the project pretty easily. Stopping traffic allowed delivery and ready-mix trucks to come in and out as needed. We had a mobile construction office and we provided the DOT a mobile job laboratory.”

The work plan was based on tearing up the old road and removing old underground infrastructure. This then led to crews installing the new road subbase and installing new pipes infrastructures, with road building crews laying down new roads when possible.

Weekly project meetings were held with the city, Ferber, and the DOT to discuss all the issues and problems that arose and resolve them. During the summer work months, crews were working 10 to 12 hours a day, six days a week, and during fall, fewer hours were logged.

The numbers for the removal of the old road and infrastructure and new materials used on the project are being finalized.

The existing asphalt was milled and re-used to create temporary gravel for crossings and business accesses. One of the subcontractors took the remaining materials for use on other projects.

Due to the closeness of the contractor's shop, a mechanic was sent in as needed to do immediate repairs and routine maintenance on the nearly 12 vehicles it had at the job site.

“We didn't really have any major issues with our equipment,” said Buck. “As long as everyone keeps up with their daily maintenance, we were in good shape.”

Buck noted that the original road builders did a good job at the time.

“Construction methods are still the same — they're just using better and more long lasting materials nowadays,” he said. “Learning how to critical path schedule was a good lesson learned on this project with the different complexities of the phasing and all the different subcontractors and putting them altogether into one master schedule. Making sure that everything flows is critical and it was quite a learning lesson for us.

“We knew going into this project what kind of dedication it was going to take,” he said, “and when we laid out the schedule a year ago, everyone bought into it and said 'we'll devote the time and people into it' and they did.”