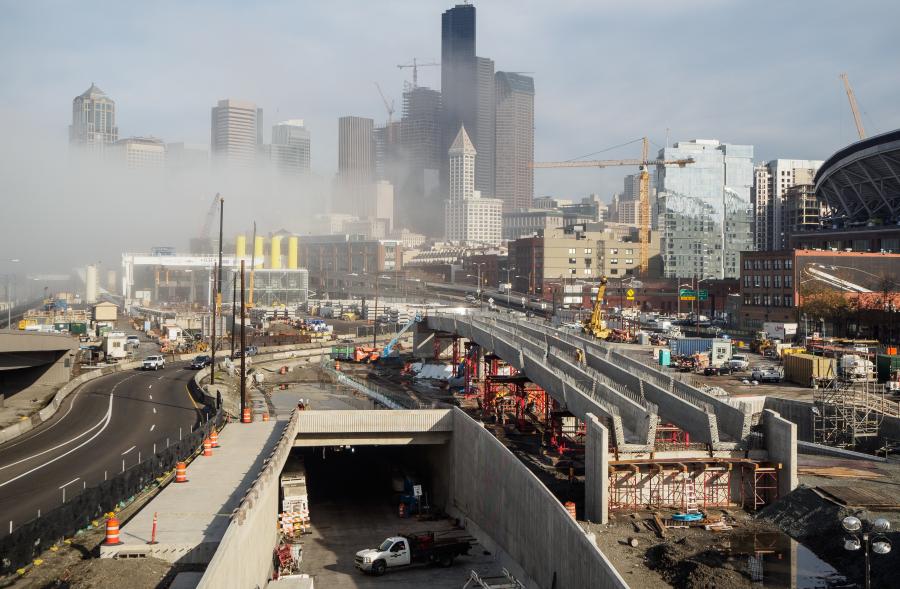 Work in Seattle is nearing completion on what will be the first bridge of its kind anywhere in the world. They call it “the small bridge with the big promise,” a span designed to return to its original shape after a major earthquake.

The bridge is an exit ramp that will deposit northbound travelers from the new SR 99 tunnel into downtown Seattle.

“The vision, I think, is really quite exciting,” said Tom Baker, state bridge and structures engineer with the Washington Department of Transportation. “The paradigm has been no collapse. In the future we can be designing for no damage — immediate use by emergency vehicles, commerce, the public. If that comes true, that's a giant leap forward.”

The bridge depends on two cutting edge differences — AKA “flexible bridge” technology — from the traditional usual means of building bridges.

“The first and the most crucial are the reinforcing bars called SMA — shape memory alloy,” Baker said. “These bars remember what their original shape was. We not only have to have the bars return to shape, but the concrete surrounding the bars. It's a concrete that is highly flexible, it has a lot of fibers in it so that as it moves it doesn't crack and fall away after the bars have moved.”

The experiments for combining the SMA bars with the bendable concrete started 15 years ago at the University of Nevada-Reno earthquake engineering laboratory, where they test new materials to the breaking point.

“The kind of tests we have done in the laboratory, we have really pushed things to the limit,” said Professor M. Saiid Saiidi. “We have simulated very strong earthquakes, well beyond the kind of earthquakes that are likely to occur during the lifespan of the bridge. We typically test bridge columns to magnitude -7.5 and -8.”

Standard bridge columns fail under that kind of pressure, according a WSDOT project video. But the laboratory tests prove that columns made with SMAs and composite could be pushed to extremes and still straighten up again.

Crews installed SMA bars in the top five feet of the two bridge columns. The bottom two-thirds were built with standard concrete. A few days later, the bendable concrete went in on top of the five feet to cover SMA bars.

“We put this at a location where the main motion of the quake will take place and that is where these SMA bars will restore us back to the original position,” Baker said. “You don't need it in the rest of the structure.”

The construction techniques and equipment do not differ greatly from traditional bridge building Baker said. But the work is still experimental and has not been mainstreamed for the industry.

But if the “flexible bridge” technology proves to be cost effective, that will likely change, he said.

“Right now, work with the bars is very similar to handling rebar, except they have to be coupled with rebar just at the top ten feet of the structure. We use coupling devices to kind of bolt the bars together. If two bars overlap, any stress on one bar, as concrete is pulled, the stress will transfer to the parallel bar. You have to have enough distance for the lap splice to transfer that stress. It lets you butt up two bars together and connect them.”

One difference in the construction process is the mixing of the concrete, Baker said. It is mixed on site rather than at ready mix plant. That's because the concrete contains a lot of fibers and is mixed in small batches. In the future, they may mix at the plant, he said.

The project had been endorsed by the federal government, which also helped fund it, according to the WSDOT video. “It will be studied and assessed to learn more about the promise it holds for future construction in earthquake zones.”

If the bridge performs as expected, it could make a big difference in how communities recover after a major earthquake.

“We have billions of dollars of shipping every year through the west side of the state,” Baker said. “People going to and from work, businesses conducting work. They all need to get around after a quake and this could be a major step forward in applying that immediately after a quake.”

The bridge is slated to be finished this spring, but will not be put into use until the tunnel is completed, which is scheduled for early 2019.