Second Round of Construction Begins on $42.5M College

The design and quality of the facility — the buildings, the classrooms, the grounds —should support students’ success and encourage engagement. 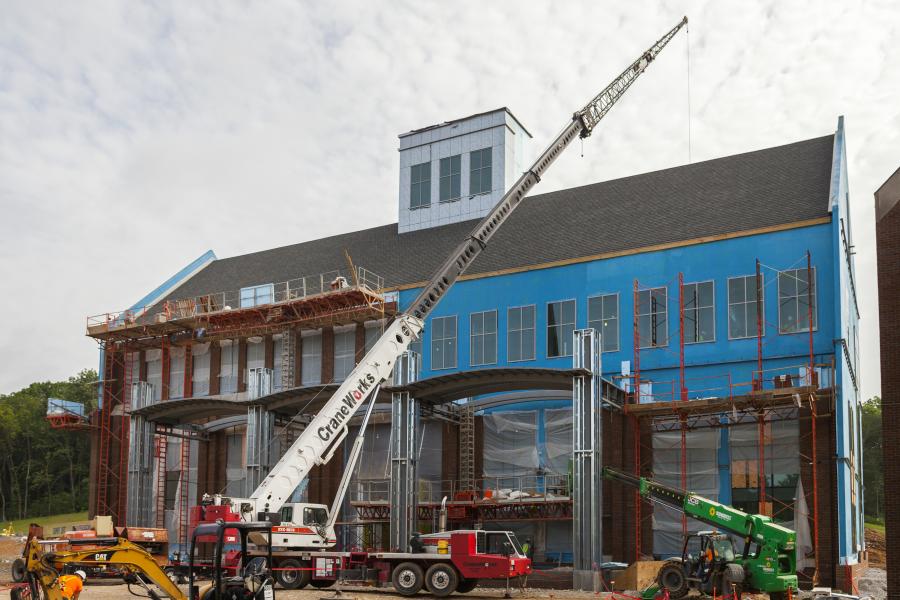 Brian McCord, RealtyPictures.com photo In Columbia, Tenn., officials at Columbia State Community College are looking ahead to a second round of construction on a $42.5 million campus, now that crews have put the finishing touches on the master plan’s Phase I.

In Columbia, Tenn., officials at Columbia State Community College are looking ahead to a second round of construction on a $42.5 million campus, now that crews have put the finishing touches on the master plan's Phase I.

“The old Williamson Campus building had reached its capacity of approximately 1,500 students,” said Janet Smith, school president. “There was no room to expand in order to accommodate Williamson County's rapidly growing population base, and we were unable to offer programs there requiring chemistry and physics,

“Columbia State is known as an institution that's student-centered and committed to student success. The design and quality of the facility — the buildings, the classrooms, the grounds —should support students' success and encourage engagement. The old campus was a worn out building in which quality teaching was occurring. The community, while proud of the success in education occurring at Columbia State, was not proud of the image projected by the old facility. The students, the faculty, the college and the community deserved better.

“Columbia State offers associate degrees and technical certificates. Through the programs offered at this new campus, students will graduate with degrees that allow them to enter the workforce or continue their studies at a university. As we open the doors, we will be providing education and training for students seeking to be nurses, IT professionals, film crew technicians, or interested in commercial entertainment. All of these are professions in which jobs exist in our service area and that are in high demand.

“Because of this new campus, we seek to offer an anesthesia technology program and a hospitality certificate — both are programs that have been requested by businesses and organizations and ones in which they are involved in development. As it pertains to those seeking a transfer degree, the state-of-the-art science labs allows the college to offer the courses needed to obtain an associate of science degree without traveling to another campus.”

The campus has been supported by state, community and college funds. Phase II construction will take place once the planning and funding is in place, and the design is initiated, assuming appropriation of construction funding in the following fiscal year's budget. The building process will involve site work, including adjacent parking, followed by construction of the first building in Phase II.

“These buildings are the first step in developing a central campus mall aimed at creating an outdoor space for faculty and students alike. The project also includes an extension of the southern portion of Knolltop Lane connecting Liberty Pike to the Ovation development currently under construction increasing connectivity with the community.”

Navigating the public/private partnerships and relationship with the city of Franklin was among the biggest challenges.

“The negotiations for this property were complicated, due to an existing Planned Unit Development [PUD] that needed to be broken prior to closing. That process included countless meetings with the Mayor, Franklin Planning Department and adjacent land owners to agree upon the terms. A key component of the negotiations was the completion of Knoll Top Lane, a connector street that will serve future developments as well as the new campus. The costs for this road were shared among the college, the city and adjacent developers. While this is an uncommon arrangement, the collaborative partnership of these entities enabled an agreement that met the needs of each party while providing an effective use of funds. Through these efforts and last minute funding from the state, Columbia State closed on the property at the end of 2012 and entered into the design and construction phases of the project.

“The previous relationships with the city and developers continued to be important during the design and construction phases. As a state-owned property, the city of Franklin had minimal authority to govern the use of the property although both the state and Columbia State were sensitive to this relationship. During design, both the college and design team worked tirelessly to meet the requests of the city while not impacting the needs of the college. This involved several meetings across all departments at the city. Compromises were reached on items such as landscape requirements and storm water management. These relationships continue to this day as the buildings and site improvements are reviewed and inspected by the city of Franklin.”

The project site was a former phosphate strip mine. The strip mining process left several with unsuitable soil and created several sinkholes that were remediated as part of the site preparation. Additionally, a substantial amount of rock blasting and removal was required in order to excavate the site and construct the building pads. The pads themselves were over excavated 5 ft. (1.5 m) and back filled with clean shot rock.

The elements also were an issue during construction.

“The project experienced 57 days lost to weather above and beyond the NOAA five-year average. Weather included a combination of rain, snow and ice. ”

The most time-consuming part of the project involved coordinating additional work requests throughout construction.

“Our team worked tirelessly to incorporate changes in the most cost effective manner while not holding up overall project progress,” said Bickerstaff. “Many of these revisions were needed to provide the most functional space for Columbia State.”

Each of the three buildings incorporates multiple programmatic areas to maximize educational offerings for Columbia State. The Arts & Humanities building houses the commercial entertainment program, the film crew technology program, dance studio, computer labs, the majority of general purpose classrooms and half of the faculty offices. This required sound proof construction in studios, a cyclorama wall in the film studio, a cushioned dance floor and extensive low-voltage cabling.

The Science/Technology/Engineering/ Mathematics (STEM) building includes the science and nursing programs, chemistry, biology and physics labs, computer labs and the remaining half of the faculty offices. This required special lab construction including exhaust systems and hoods, gas connections, eye wash stations and acid resistant counter tops. The student services and administration building includes the employment workforce development program, the dean's suite, a conference suite, the reading/library area and testing and tutoring spaces all with high-end finishes.

As for sustainable construction, the project utilizes a geothermal loop system that includes more than 130 500-ft. (152 m) deep wells, with mechanical systems, including 31 energy-efficient heat pumps.

The layout for the new campus was a creative challenge for the design team.

“The main vision for this project was to give Columbia State's Williamson County campus a specific identity intrinsically tied to its location,” said J. Garry Askew, BAUER ASKEW Architecture. “The design intent was to create an inviting campus atmosphere that encourages connection and community fostering a healthy learning environment, not just another commuter satellite location.”

Askew said in addition to being located on the side of a hill, the site itself was a concern in that it was an abandoned phosphate mining site.

“The design essentially carved the campus into the terrain, which required remediation of mining sinkholes, as well as a large amount of earth work. In addition to addressing the existing conditions, the campus was designed to be accessible for all students, therefore minimizing the effect of significant grade changes was a critical challenge. The design and construction teams worked together to create premier educational environment out of a challenging site.”

The most rewarding aspect of the project, Askew said, was the collaboration with the client to create a physical manifestation of their dreams and vision for this campus.

“The design team met with all levels of campus faculty and staff to identify specific needs and worked with the construction team to ensure those needs were met.”

Askew also said sustainability was an integral part of the design process.

“The decision was made early in the design process for the entire campus to utilize geothermal mechanical systems. These are served by 144 wells each at 500 ft. deep. The fields are located beneath the parking lots and the main commons space for the campus.

“In addition, the project focused on sustainability in several other ways. One specific example was the design team's approach to existing trees. The site originally had a number of new growth trees at this former mining site that were removed to accommodate the campus. Of those, cherry trees were specifically identified, salvaged, milled, finished and eventually returned to the site in the form of benches that line the corridors of the academic buildings. The team made special efforts to use a local mill and labor force for the entire process from start to finish.”

“It alludes to historical references with rhythm and richness of material, but is also distinctly crafted with current technology,” said Askew. “One of the most exciting features of the campus is the strong connection between interior and exterior spaces on campus. Early in the design process, there were significant efforts to divide the desired program into three separate buildings in order to achieve a campus atmosphere. Through the use of expansive windows and main entries opening to a central quadrangle, the design team fostered transparency between the various buildings on campus, focusing visual connections and physical interactions on the main outdoor quadrangle.”

Smith said, “Providing students with skills and knowledge that is validated by a degree or certificate provides for a career and an income after graduation. Working with the community, businesses and organizations to identify and develop courses and programs such as the hospitality certificate provides a workforce to meet the skilled needs of the area. Expanding educational opportunities for completion of degrees builds an educated citizenry. The higher the education level of the citizenry, the greater the state's economic base.”

Now that Phase I work has concluded with a formal ribbon cutting, said Smith, “There are not words to describe the feeling. It is surreal in a very good way. It's very gratifying to know that the biggest reward will be lives being touched for the better because the campus exists and that those lives will touch others that will make a difference. The impact is immense.”