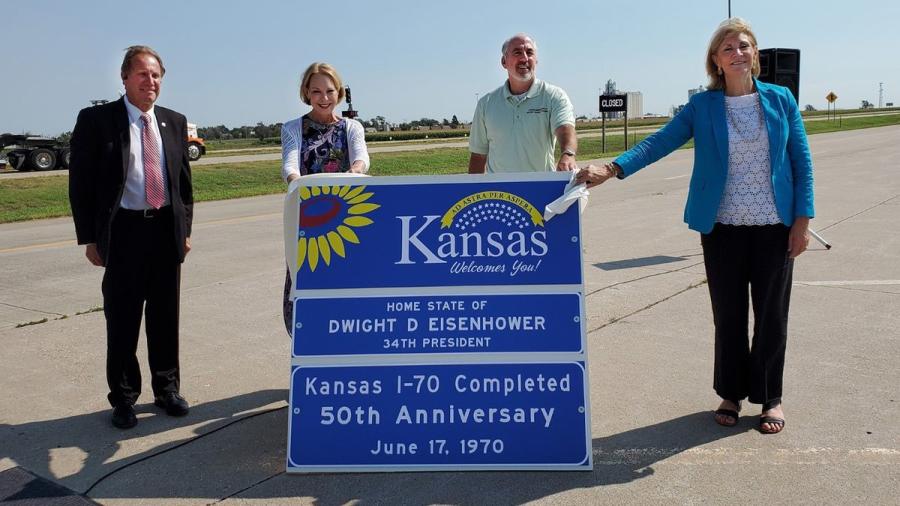 
Kansas Transportation Secretary Julie Lorenz celebrated the 50th anniversary of the completion of I-70 in Kansas on Aug. 20 at the Kanorado weigh station near the Kansas/Colorado state line. A replica of signs located on eastbound I-70 highlighting this accomplishment was unveiled at the event.

"In the past 20 years, the people of Kansas have invested around $1.2 billion dollars in I-70's expansion, repair and maintenance," Lorenz said. "We will continue to focus on preservation and maintenance of our state's interstates. I am proud to say that preservation is specifically called-out as a top priority in the new Eisenhower Legacy Transportation Program. At KDOT, we are committed to fulfilling our responsibility."

On Nov. 14, 1956, Kansas completed the first section of Interstate in the United States under the new Federal-Aid Highway Act of 1956. This 8-mi. section of I-70 is just west of Topeka. Celebrations of completed sections of I-70 continued for the next 14 years until the final section was opened on June 17, 1970.

The highway system is important for the travel industry across the state.

"Visitors from all across this land come to Kansas and travel on our highways to experience our wide-open spaces, our beautiful state parks and wildlife areas and to enjoy the abundant activities that make us a great state to visit," said Kansas Department of Wildlife, Parks and Tourism Secretary Brad Loveless.

Members of the I-70 Association also participated in the celebration.

"Kansas I-70 is an economic driver to many communities across the state," said Julie Roller Weeks, Abilene Convention and Visitors Bureau director and Kansas I-70 Association member. "By making travel easier, we see increased sales and visitation in our businesses and attractions. The economic impact of tourism and Kansas I-70 makes a big difference in our communities."

I-70 is the direct east-west route through Kansas. It originally cost $155.6 million (an average of $420,000 per mile) to construct the 370 mi. of I-70, not including the Kansas Turnpike portion. At the time I-70 opened, it was the longest continuous segment of Interstate highway to be completed by any state in the nation.

Today, Kansas has a total of 875 mi. of Interstate, which is less than 1 percent of all roads in Kansas. These roadways carry 24.6 percent of the traffic, nearly one-fourth of all travel in the state.