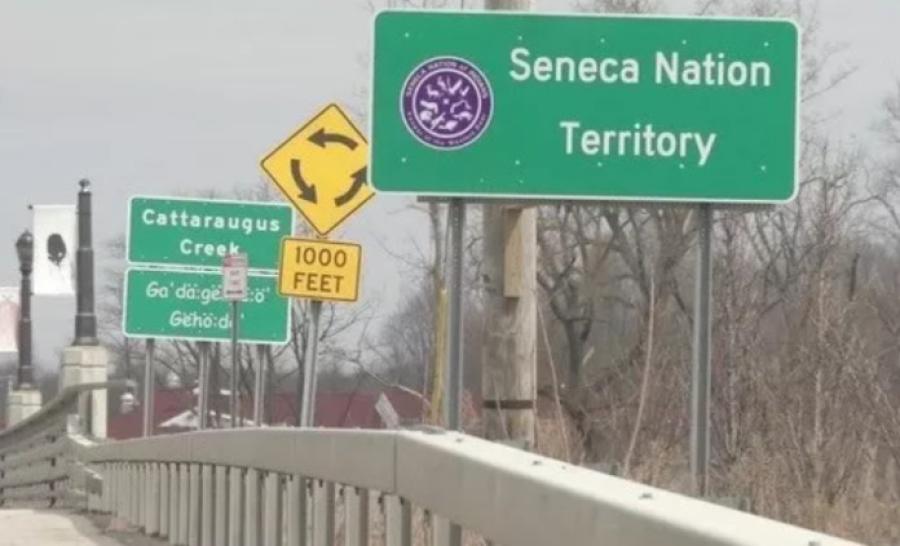 Seneca tribal leaders say they are entitled to a share of tolls from the three-mile stretch or road that bisects the Cattaraugus Reservation. (theyeshivaworld.com photo)

IRVING, N.Y. (AP) The Seneca Indian Nation renewed its fight with New York state over its construction of the Thruway across reservation land more than 60 years ago.

A federal lawsuit naming Gov. Andrew Cuomo and other state officials seeks to force the state to get federal approval for the toll road, which the Senecas say the state failed to do before building it. Tribal leaders say they are entitled to a share of tolls from the three-mile stretch that bisects the Cattaraugus Reservation.

“After decades of seeing our property invaded without authorization from the federal government that is required to protect our native land, we find it necessary to take legal action against these state officials,” Seneca President Todd Gates said.

It is the latest in a series of maneuvers involving a section of Interstate 90 dating back at least 25 years. After a federal magistrate judge dismissed a similar lawsuit in 1999, finding the state was immune from the legal action, the western New York tribe in 2007 sent a $2 million bill for back tolls during a dispute with the state over cigarette taxes. In 2009, with the state poised to enforce cigarette tax collections, tribal leaders threatened to collect their own $2 tolls from vehicles.

The Seneca Nation and state are currently at odds over whether the nation is obligated to share revenue from its three casinos with the state.

Thruway officials cite a 1954 easement for the Thruway granted by the Seneca Nation for which the tribe received $75,000.

“We have defended that position in the past and will continue to do so going forward,” New York State Thruway Authority spokesman Jonathan Dougherty said.

The new lawsuit, filed in U.S. District Court in Buffalo, contends nation leaders were pressured by the state into agreeing to the easement at a time when the state was considering eliminating the Senecas' Allegany reservation and displacing those who lived there. The U.S. Interior Department never gave the required federal approval to the easement, according to the complaint.

Gates said the roadway has hindered economic development on the rural Seneca territory.

The Senecas stopped making casino payments to New York a year ago, saying the nation's financial obligation under a 2002 compact with New York had expired after 14 years and $1.4 billion in payments. The state, which shared the proceeds with the casino host cities of Buffalo, Niagara Falls and Salamanca, disputes the interpretation and believes the payments should continue. The matter is expected to be settled in arbitration.