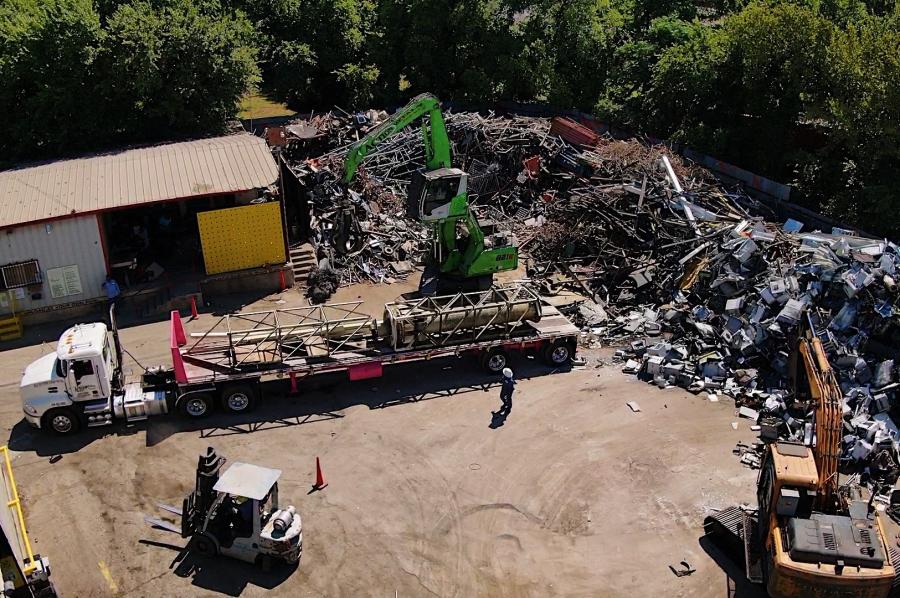 With the reach on his 821, Action Metals can easily pick material from the flat deck and move it for processing.

When Boris Grinstein took over the reins of his father's recycling business, in 2018, his first goal was to develop new business and clients.

Action Metals has been serving the Dallas / Fort Worth area since 1994.

The younger Grinstein could see that the business was in need of some renewal, and increasing the volume of material in the yard would underwrite his plan to invest in new equipment.

Step one of the plan was highly successful. More material was getting processed and revenues were on the rise. The second step, however, became problematic.

"We got an excavator and a company converted it for scrap handling. They raised the cab, extended the boom and added a counterweight," Grinstein said.

But the crew at Action Metals soon learned that the converted excavator was absolutely not the solution they had hoped for.

"It was an awful experience," said Grinstein. "It wore out real fast. The conversions took the machine ‘way out of spec'. Everything was vibrating. The cab was swinging like a pendulum. We tried welding in some reinforcements for the cab but they didn't help."

Looking for a better idea, Grinstein reached out to a nearby branch of ASCO Equipment, the Dallas area's distributor of Sennebogen purpose-built material handlers.

"Around Dallas, you see Sennebogen everywhere," said Grinstein. "One yard has five of them running. They have a good name. When you see the green, you know the work is going to get done."

Grinstein had actually looked into earlier models of Sennebogen machines several years ago, but he had some reservations about their design at the time. He was pleased to see that, with the new E-Series models, his concerns had been addressed.

After comparing three models in the lineup, he placed his order for a crawler-mounted 821 R-HD scrap handler.

Just One Way to Grow

The size of the Action Metals yard was a key factor in all of the decision-making for the new unit.

"It's a small yard, with really room for just two machines to operate, especially as our volumes increase. The only way to grow the business is to be more efficient in moving material."

Choosing the tracked 821 over the rubber-tired 821 also was driven by the size of the yard. While the wheeled model can cover long distances quickly in a larger yard, Action Metals doesn't have the long aisles to take advantage of the speed. However, the crawler design makes maneuvering more efficient in his compact yard.

Models on wheels need to deploy outriggers to stabilize once they are in position for loading, requiring extra set-up time and extra space for its footprint. On tracks, the 821 R-HD has the inherent stability to lift and swing loads, without outriggers, so it goes right to work as soon as it's in position.

This time, with the 821 on the job, Grinstein is achieving his goals for Action Metals.

"This machine loads two times faster than the excavator did. We can get into the yard early and ship out 7 or 8 trailer loads before we open up for the start of the day.

"The cycles are faster, so we move more material. I'm very hands-on with equipment and this is an awesome machine. We can load a trailer full of HMS in just 12 minutes, which would take 20 to 30 minutes using the excavator. I finished one trailer load in just 8 minutes, and weighed it in at 79,000 lbs.

"The 821 has good reach and the elevating cab has great height; we don't even have to go up all the way to see into the trailer. And there's no shake. It's very stable even when we're crashing down on the load. Our operator used to get lower back pains and aches from all the vibration. Not now. And as we say, happy operator, happy yard."

"Purpose-Built" to Save Costs, Downtime

As well as moving more scrap, Grinstein finds that the new Sennebogen is reducing costs for his yard, too. He reports no downtime for the machine, and fuel costs are lower.

Since the Sennebogen went to work, Grinstein has retired two of his older machines. The 821, he said, can do its own clean-up by easily attaching a magnet in place of the grapple — a five minute operation.

"This has a smart generator setup," he said. "It detects faulty connections so, if there's any problem, it won't power the magnet. It protects itself from shorting out the generator and from damage to the magnet. That was a recurring problem with the excavator.

"I hesitated about the money for this kind of new machine," he said. "But a lot of yards will do what I did: they have an excavator and just put a grapple on it. It's cheaper. But the Sennebogen is really better financially. Every dollar is the best spent money — I make my payment, and I know I'm not spending any other money on my crane. I'm being efficient." 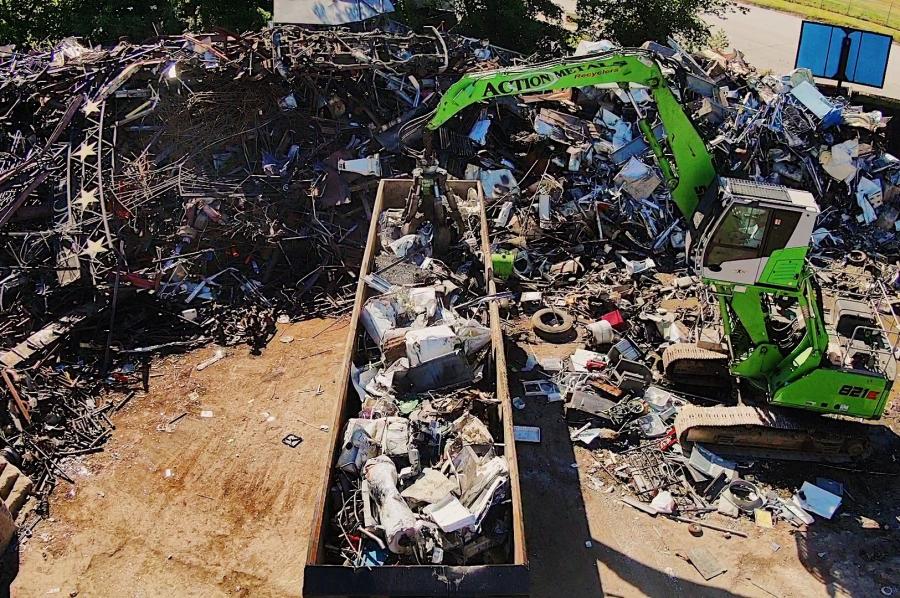 From his vantage point, the operator has a clear view of the trailer, making it safe and easy to unload.

Scrap Handlers vs. Excavators — Built for a Purpose

Action Metals President Boris Grinstein has seen first-hand how a purpose-built scrap handler is better suited to his operation than a converted excavator. But why is the difference so pronounced?

The key is the difference in purpose: one machine is built to lift heavy weights above ground, while the other is supposed to dig deep below ground level.

That difference in geometry means a lot to the engineers who design such machines. The stresses on the structural components are distributed very differently, so the parts are designed to handle different points of wear. When an excavator is forced to reach up very high with a full load, the weight is transferred to places that were never intended to carry it. The same is true when you mount a high-rise cab on an undercarriage that was not designed to stabilize such a top-heavy-structure.

Excavators generate massive break-out forces to take big bites into the earth. Their booms, hydraulics and power train are all built for that purpose. But these forces aren't needed to swing a grapple or magnet load of scrap. Instead, the scrap handler is built for speed, to lift high and swing fast.

The engine power and heavy frame of the digging machine are simply a costly energy drain in scrap handling tasks. What the scrap handler really needs is smooth handling and dampening of the vibrations so operators can run non-stop for entire shifts without fatigue.

Outwardly, the two machine types appear very similar, but closer examination shows you how engineers recognize their different purposes. For example, on a scrap handler, the hydraulic stick cylinder is positioned on the underside of the boom, to power the stick upwards to the top of its lift range.

The stick cylinder of an excavator, however, is located above the boom, allowing to leverage the stick and bucket down into the earth more efficiently. The scrap handler also is designed to support its counterweight while the counterweight on a converted excavator is added as an afterthought.

As Action Metals learned, both machines are built for a purpose. Choosing the machine that's built for your purpose will pay off in performance, uptime and efficiency. 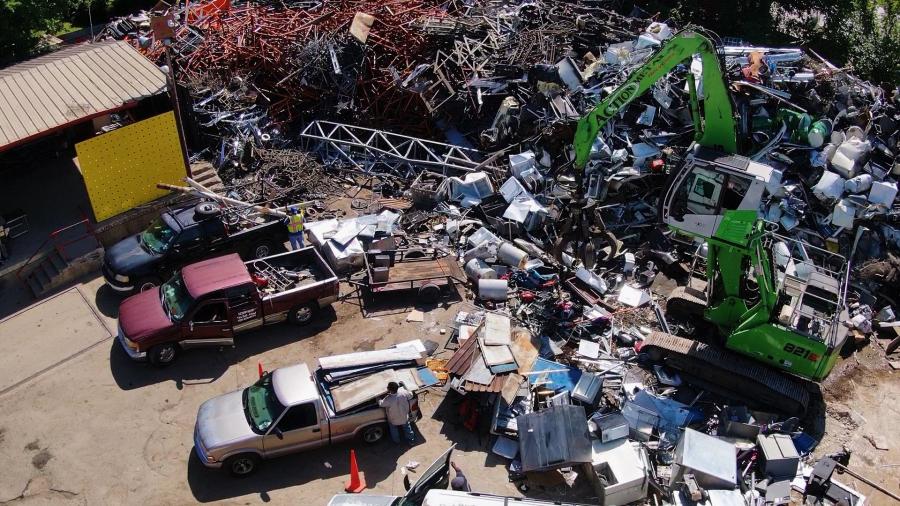 When the pickups back in, the responsiveness of the hydraulics allows the operator to pick the bed of the dump trucks without any worries.