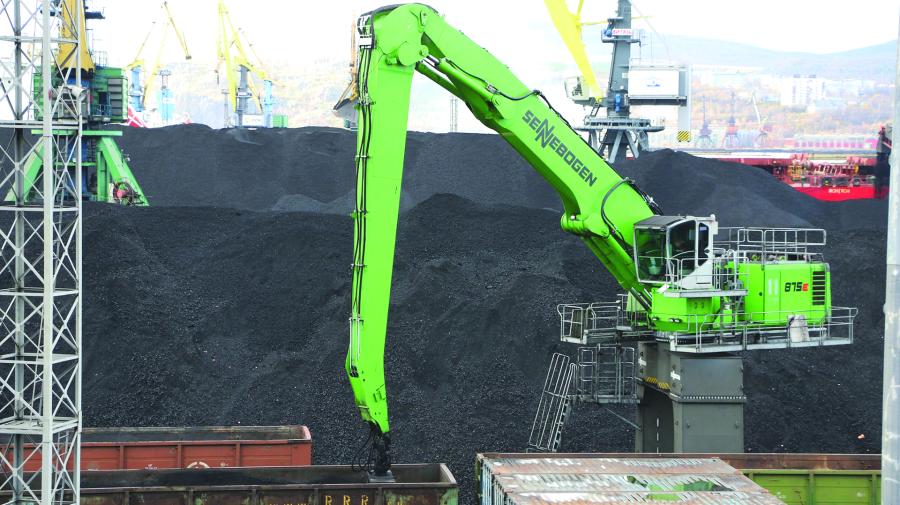 Approximately 5,291 tons of coal arrive at Murmansk port by railcar every day. They are unloaded by a Sennebogen 875 with a Green Hybrid Energy Recovery System built on a crawler portal undercarriage and equipped with a 6.5 cu. yds. (5 cu m) clamshell bucket

Ports are the lynchpins of the economy, connecting countries and companies with each other. At a port in the largest city in the Arctic, an innovative Sennebogen 875 material handler is the lynchpin connecting a rich Siberian resource heritage with today's world markets.

About 5,291 tons (4,800 t) of Siberian coal arrive at the historic Murmansk port every day by rail and, in order to in turn be stored for subsequent shipment, are unloaded by the Sennebogen 875 equipped with a crawler portal undercarriage and 6.5 cu. yd. (5 cu m) clamshell. Coal handling is a key business in Murmansk, which celebrated its 100th anniversary in 2016. Originally named Romanow-na-Murmana after the Russian czar, the “Cape Town of the North” is located along a bay of the Arctic Ocean. Shaped by its port, the origin of the region's economic growth, the city is actually one year younger than the port of the same name.

Equipped with a crawler portal undercarriage, the Sennebogen 875 stands directly over the rails in order to remove the coal with the clamshell. Due to a track width of 19 ft. (5.8 m) and a passage height of 16 ft. 5 in. (5 m), the machine's undercarriage spans one of the two railway lines on the site. However, the material handler's reach allows it to comfortably serve both the railway line directly underneath and the one parallel to it at the same time. In addition, the diesel-driven Sennebogen 875 has a range of 78 ft. 9 in. (24 m) and alternately unloads the railcars on the right and left in a continuous cycle.

“Thanks to the powerful slewing drive with up to five revolutions per minute, we can manage an unloading cycle in under 30 seconds."

Delivered in mid-2015 by Sennebogen's local sales and service partner JSC KWINTMADI, the 875 material handler is equipped with a 530 hp (395 kW) diesel engine and the Green Hybrid energy recovery system.

For use at Arctic temperatures, the unit was optimized with a low temperature package, including numerous preheating mechanisms for the equipment and energy recovery system, as well as special lubricants for temperatures down to -31F (-35C).

In addition to the 875 with crawler portal, several Sennebogen 830 and 835 material handlers are in use loading bulk goods at the Port of Murmansk.