Due to safety concerns and increased traffic congestion, way back in 1990 the New Hampshire Department of Transportation began to study potential improvements to the Spaulding Turnpike. 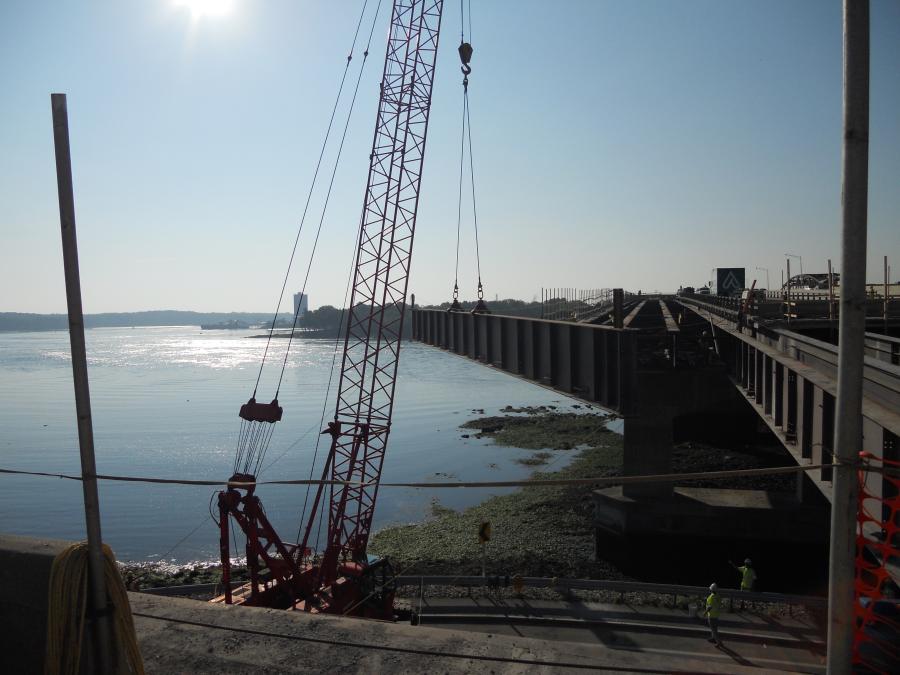 The Newington-Dover Bridge Project on the Spaulding Turnpike has been under construction for five years. With completion slated for 2022, this multi-million dollar project is projected to cost a total of $270 million dollars by the time it is completed.

A major project to reconstruct and widen a 3.5-mi. (5.6 km) section of the Spaulding Turnpike from the north end of the Gosling Road/Pease Boulevard Interchange in Newington, N.H., across the Little Bay Bridges to the Dover Toll Plaza in Dover, N.H., is underway.

Due to safety concerns and increased traffic congestion, way back in 1990 the New Hampshire Department of Transportation began to study potential improvements to the Spaulding Turnpike, New Hampshire's major limited-access North-South highway linking the Seacoast area and I-95 with Concord via U.S. 4 and with the Lakes Region and White Mountains via NH 16.

Although Senate Bill 152-FN-A authorized the New Hampshire Department of Transportation to conduct a study of the section of the Spaulding Turnpike, the feasibility study was suspended in 1992 to allow completion of the Pease Surface Transportation Master Plan. It was resumed in 1997 in order to conceptually develop both a short-range plan to address existing safety deficiencies and a variety of long-term improvement options for detailed engineering and environmental studies.

From 2003 to 2008 the project team, advisory task force and interested Seacoast stakeholders evaluated a range of reasonable alternatives to identify a preferred alternative to improve long-term mobility and safety along the Spaulding Turnpike between Exit 1 and the Dover toll plaza just north of Exit 6. The 3.5-mi. stretch of the turnpike in this area is characterized by closely spaced interchanges, substandard geometry and shoulder areas and capacity-constrained conditions during the weekday morning and evening commuter periods.

Preliminary engineering and environmental studies were completed and a Preferred Alternative was proposed. The Seacoast Metropolitan Planning Organization deemed the need for the Newington-Dover Turnpike improvements a top long-term priority.

The first of five contracts saw work on the new channel crossing begin in spring of 2010, almost exactly 20 years after the study began.

The purpose of this project, which is included in the state's ten-year-plan, is to improve transportation efficiency and reduce safety problems, while minimizing social, economic and environmental impacts along this section of the Spaulding Turnpike.

In addition to linking the Seacoast Region with Concord, the eastern portion of the Lakes Region, and the White Mountains, the Spaulding Turnpike also is part of the National Highway System. Functionally classified as a principal arterial, it is a major commuter route that joins the growing residential areas of Dover-Somersworth-Rochester with the industrial and regional commercial centers in Newington, Portsmouth and northern Massachusetts. It is the major artery for freight into and out of the areas north of the Little Bay Bridges and also serves as a major tourist route.

Heavy volume during weekday and weekend peak hours results in unacceptable levels of service, with motorists experiencing severe congestion and long delays along this segment of the corridor.

Looking ahead, the problem is expected to worsen, with the average daily traffic volume expected to increase to approximately 94,000 vehicles per day by 2025. Future projections indicate that if the turnpike is not improved, weekday traffic congestion will spread to additional hours of the morning and evening, and safety conditions will continue to deteriorate, Cota said.

Complicating traffic flow are a number of existing geometric deficiencies such as limited sight distance and substandard shoulder width on the Little Bay Bridges and substandard merge, diverge and weave areas at the interchanges. Many of the traffic maneuvers required to enter, exit or change lanes along this section of the Turnpike contribute to accidents.

The existing acceleration, deceleration and weaving sections along the turnpike are inadequate by current design standards, Cota notes. As traffic volume increases, so do accidents, which create long delays in an area where no viable alternate routes exist.

The selected alternative will implement transportation system management improvements such as reusing the General Sullivan Bridge for pedestrian, bicycle and recreational use. It includes provisions for future rail service, improving bus transit service and instituting other strategies that may reduce vehicle trips along the Spaulding Turnpike, in addition to upgrading the mainline, Little Bay Bridges and interchanges.

The Newington-Dover Bridge Project on the Spaulding Turnpike has been under construction for five years. With completion slated for 2022, this multi-million dollar project is projected to cost a total of $270 million dollars by the time it is completed. The project is divided into five constructions contracts. Currently, three contracts are either completed or underway. Two remaining contracts will be finalized over the next five to seven years.

“The project, which is primarily funded through turnpike toll revenue and bond proceeds, will alleviate traffic congestion between Newington and Dover on Routes 4 and 16,” Cota explained. In addition to the turnpike expansion, the project has invested in environmental mitigation components ($4.57 million invested in close to 225 acres for preservation and restoration), the completion of regional Park N Ride facilities (completed in Dover and Rochester, with one being planned in Lee) and investments in alternative transportation options ($2 million investment in the Amtrak Downeaster and expanded transit service with COAST and C&J, in addition to the creation of a Transportation Management Authority).

The construction contracts will ultimately provide four travel lanes northbound and southbound along the turnpike between Exit 3 and Exit 6. These contracts include:

• Contract “M” — construction of the turnpike roadway approach on the Newington side of the Little Bay Bridge including a new full service interchange at Exit 3, improvements of stormwater detention basins, the restoration of Railway Brook and future accommodations for railroad spur across the Turnpike by others, (completion spring 2016)

• Contract “Q” — construction of turnpike roadway improvements on the Dover side of the Little Bay Bridges to include the elimination of Exit 5, full service interchange at Exit 6 with the installation of two signalized intersections at the new Exit 6 ramps, a roundabout at Boston Harbor Road, municipal water and sewer infrastructure upgrades, Unitil gas line relocations along the easterly side of the turnpike including a directional bore installation under Pomeroy Cove, and the construction of sound walls north and south of Exit 6 interchange.

• Contract “S” — Rehabilitation of the General Sullivan Bridge to accommodate pedestrian and bicycle access across the Little Bay. Studies are currently being conducted to evaluate the structural integrity of the bridge and the feasibility to complete the rehabilitation. (Construction is planned for 2021-2022.)

Due to the turnpike investments under this project, Cota explained that two other supplemental projects are being brought forward to further improve traffic flow and accommodate long-term operational maintenance of the new facility: the upgrade of the Dover Toll Booth to develop Open Road Tolling to reduce user's delays and the construction of a new Turnpike Maintenance facility at the former drive-in theater located in Newington.

The project will correct safety and capacity deficiencies by expanding the current four-lane capacity along the 3.5-mi. section to eight lanes and reduce the number of interchanges from six to four. By reducing traffic congestion, interchange reconstruction and consolidation will improve air quality.

Travel time during peak hours is expected to be reduced from 10 minutes to four minutes. Connections to local roadways will be improved, reducing circuitous local travel on the turnpike system.

Other benefits of the project include improvements to water quality through higher order water treatment basins that will address the increase in imperious surface.

The project is divided into five contracts. The first contact for $54.1 million started in early spring of 2010 with the new channel crossing.

The second contract for $48.7 million started in spring of 2012 and involves the roadway expansion in the town of Newington. Completion is expected in spring 2016.

The third contract for $34 million is the rehabilitation of the existing Little Bay Bridge crossing; it started in spring of 2014 and is expected to be complete in late summer of 2017.

The fourth contract, currently estimated at $50 million, includes roadway approach construction in Dover. It will be let to bid in May, 2016, with estimated completion in summer of 2020.

The final contract to rehabilitate the existing historic General Sullivan Bridge for pedestrian and bicycle access across the Little Bay is anticipated to be let to bid in the winter of 2017-18 and is estimated to cost between $25-$30 million. Evaluation for the feasibility is underway.

A project of interest was entered into contract in the fall of 2014. Completion date is September 15, 2017.

The third contract for rehabilitation of the existing Little Bay Bridge crossing “is a subset of five total turnpike projects,” Cota explained. “It is a complex bridge rehab over fast tidal current.”

The nine-span, 1,589-ft. (487 m) -long structure will feature three general-purpose lanes plus an auxiliary lane in each direction to provide an adequate level of service for projected traffic numbers in 2025. The existing profile of the Little Bay Bridges — suitable for 60 mi. (96.5 km) per hour design criteria — will be maintained, as will the existing vertical clearance over the navigable channel.

Rehabilitation will involve replacing the existing bridge decks and evaluating the existing steel girders to determine if modification or replacement is required. Cota said the rehab project will “replace the older 1966 steel stringers, rehab the mechanical connectors on the 1984 constructed bridge segment and replace the bridge deck.”

Construction will be completed in two phases, with traffic maintained on the existing bridges and shifted once the widened section is completed so rehab can begin.

Limited excavation is needed for the project, Cota said, and material will be reused onsite.

Little Bay is a tidal area with currents up to seven knots (12 ft./sec.) and variations in water elevations of upwards to seven feet between high and low tides.

“The challenge for the project,” Cota said, “is working over a waterway that has strong tidal flows, and adjacent to heavy traffic flows.”

Another challenge was relocating a distribution gas main located under the existing bridge prior to construction.

“Due to project timing, the utility owner, Unitil Gas Company, completed a directional bore for relocation of the gas line under the Little Bay for a distance of 2,550 feet,” Cota stated.

Other bridges will be rehabilitated under other contracts. The General Sullivan Bridge, which is an historic landmark structure identified as a highly valued resource eligible for the National Register of Historic Places, is an obstruction to navigation within the channel.

The GSB is the second-highest rated historic bridge in the state's historic bridge inventory due to its association with the development of the regional transportation network and with well-known and respected bridge designers, as well as its embodiment of distinctive characteristics of multi-span through truss bridges over navigable waterways. Because of its historic significance, this bridge is federally protected, which is why it will be rehabilitated to serve pedestrians, bicyclists and recreational use instead of replaced with a multi-use path attached to the rehabilitated and widened Little Bay Bridges.

However, retaining it requires the removal of the bridge's northerly approach embankment and wing walls to facilitate the proposed reconstruction of Hilton Drive. The existing concrete wing wall along the approach embankment will be removed, exposing the back of the abutment.

A new pedestrian/bike path will connect the north end of the bridge with the Hilton Drive sidewalk. Currently used for recreational activities such as fishing and bicycling, this bridge is an important pedestrian connection across Little Bay.

The cost for rehabilitation is less than $10 million.

In total, five interchanges will be consolidated or reconfigured. Exits 2 and 5 will be eliminated, with Exits 3, 4 and 6 providing full access in all directions. Park and ride facilities will be located at Exit 9 in Dover, Exit 13 in Rochester, and along U.S. 4 in Lee.

An elevated rail connection from the Newington Branch Line into Pease Tradeport is planned.

Cota said the final two contracts will be paid through a combination of toll revenue and bonding, and are on the schedule as approved.