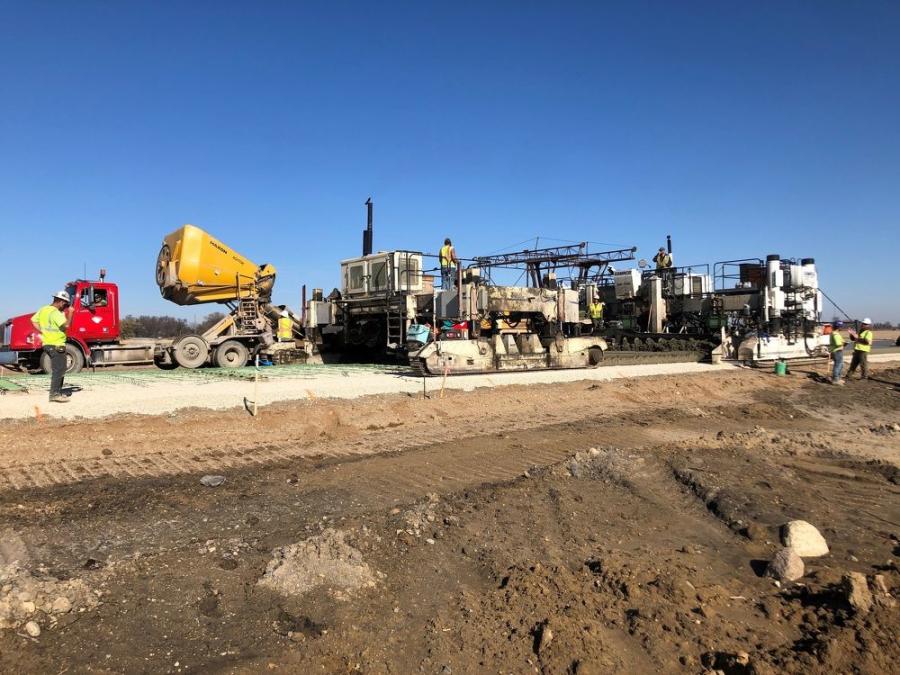 Paving operations for the new Highway 14 route in Dodge County are under way. (MnDOT photo)

Work is progressing on a project to expand U.S. Highway 14 to four lanes between Owatonna and Dodge Center in southern Minnesota. The Minnesota Department of Transportation (MnDOT) is overseeing the $108 million undertaking. 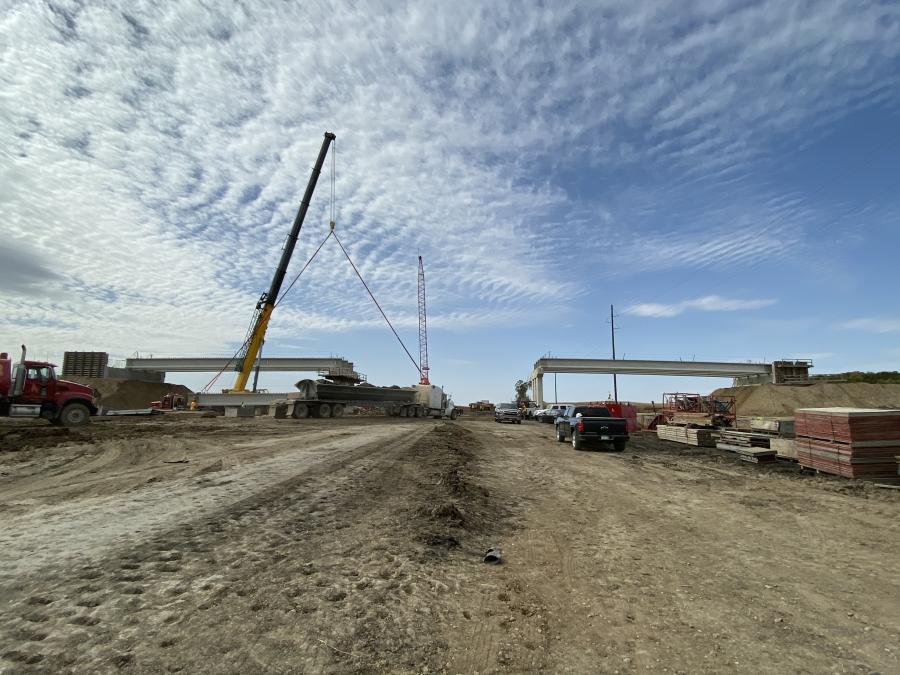 "This was the last stretch of two-lane highway between Mankato and Rochester, two significant regional trade centers," said Michael Dougherty, director of communications of MnDOT, District 6. "The construction creates a safer, controlled-access highway through this area, which would maintain a uniform four-lane stretch and uniform speeds."

According to MnDOT's website, Highway 14 is a major east-west highway, providing important links between the interregional corridors of Interstate 35 (I-35) in Owatonna, Highway 52 in Rochester and Trunk Highway 169 in Mankato. Construction will improve roughly 12.5 mi. of Highway 14 from 0.7 mi. east of Steele County 43 (SE 44th Avenue, east of Owatonna) to Highway 56 North (190th Avenue, west of Dodge Center).

Once the work is finished, Highway 14 will serve as a four-lane highway from Mankato to Rochester. This will provide motorists with an access-controlled highway to improve mobility through southern Minnesota.

Work began in April 2020. Dougherty said now is a good time to carry out the work. 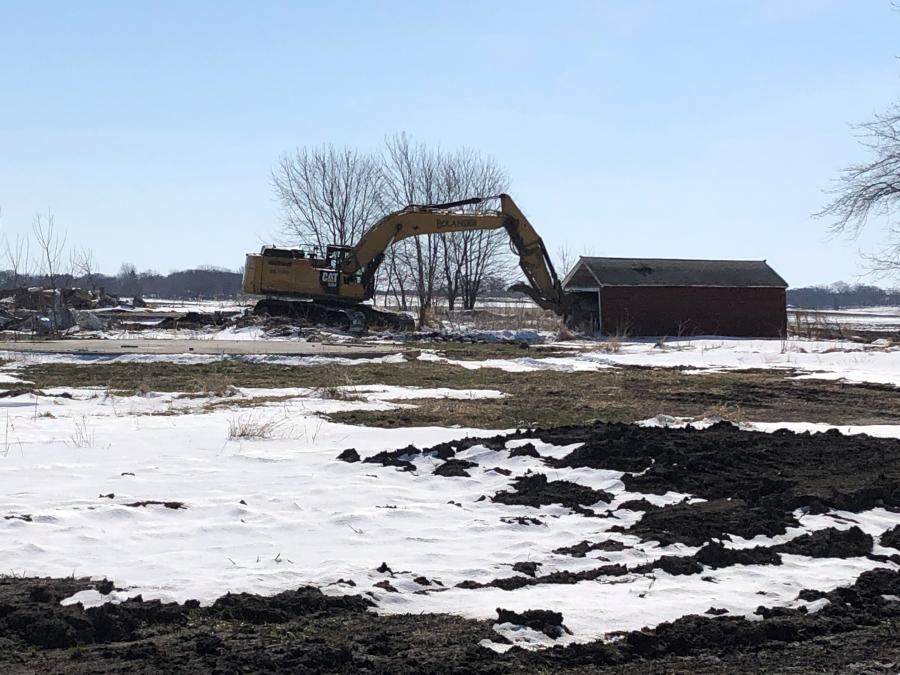 The project is funded through a special state program called Corridors of Commerce, which looks at specific criteria for proposed highway projects. This is funding outside of the regular fund that goes to Minnesota's roads and bridges.

Dougherty noted that motorists who travel on Highway 14 won't have to experience any major delays.

"People who use some of the county roads have been detoured, but the construction is being done on a new route, so it doesn't affect the current Highway 14 until the new route is connected to it. That should only be a brief inconvenience."

A total of five new bridges are being built. There are no rivers or streams in the corridor, but there are several existing drainage ways that are impacted or crossed with the new Highway 14 alignment.

The new highway will generate additional surface runoff water that will require treatment for both the rate at which the water runs off the new highway right-of-way, as well as treatment for sediment and salts that are used and generated on the roadways.

This requires the project to construct several drainage structures and storm water ponds in the 12.5-mi. project corridor.

In addition, a major safety benefit of the new Highway 14 expansion project and the alignment paralleling the Canadian Pacific Railroad is that it allows for the closure and removal of a number of existing at-grade rail crossings.

Dougherty said the project results in a safer route, because access is controlled.

"Currently, there are access points along the existing route from farms, homes and county or township roads. The new route will control those access points and divert them to specific interchanges. The adjacent county roads will be maintained and are routed over the new Highway 14 route.

"Motorists on Highway 14, as well as some county roads, will have rail crossings removed, which is another safety element. There have been crashes on the two-lane portion that are less likely on a four-lane divided highway." 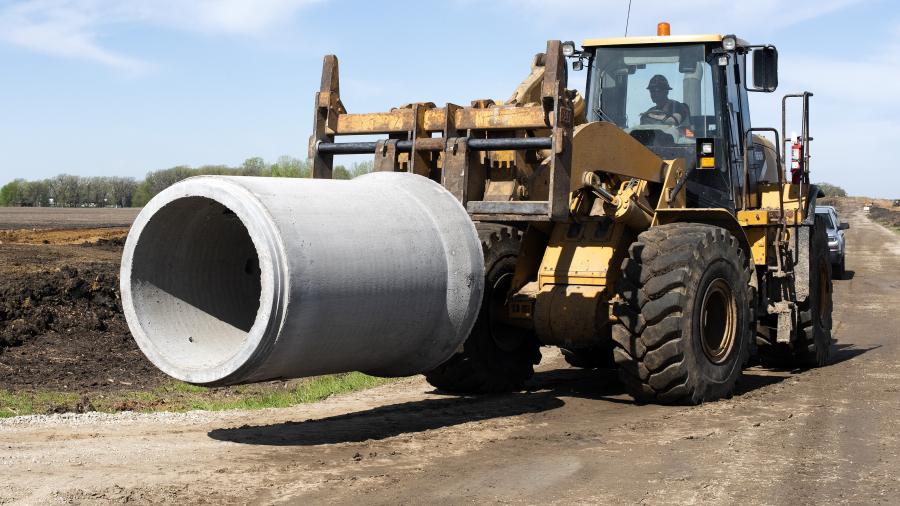 The biggest challenges on the project, from a construction standpoint, involves building on a clay grade.

"We are building a new road through farm fields, many that used field tile to drain, because the ground is wet and they wanted to get rid of excess moisture. The contractor must dry out the clay so we can get the density and compaction we need to put a road down on a good stable base."

Bulldozers, excavators, cranes and concrete pavers are being used at the job site. Main materials include sand, aggregate and concrete.

According to Dan Pirkl, MnDOT District 6 East resident engineer, grading is necessary to establish a solid road bed for the new highway.

"It's a wet area and the contractor continues to work with the conditions to ensure the soil used and the drainage is correct for this area, which has previously served as agricultural fields."

The project calls for a small amount of bituminous paving to connect to existing county roads and there will be bituminous shoulders on the new four-lane roadway. Demolition was a mix of auctioning off structures, as well as tearing down the buildings that weren't moved. This was done in advance, as the project approached construction time.

"Demolition took several months, while other structures were auctioned off and moved off site," said Pirkl. "All had to be done by spring 2020." 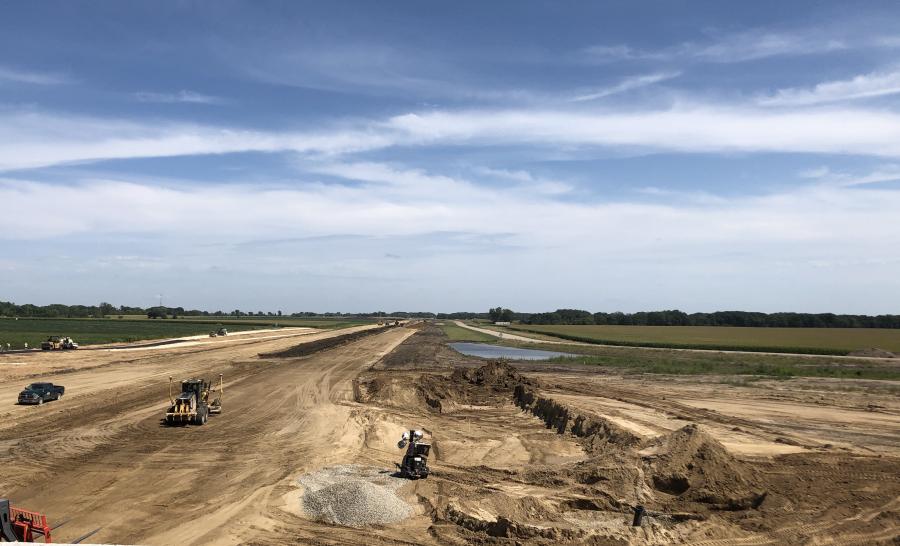 The interchange at Highway 56 required the movement of fill for the embankment, which will become the ramps to the bridge on each side.

"The soil is monitored for settlement, so we'll know it's settled and then is ready construction," said Pirkl. "We can build once the compaction occurs and settlement is complete. Monitoring devices are used to gauge the settlement. It's time consuming, waiting for embankments to settle, but that's also built into the construction schedule. In the meantime, work can take place on the foundation, piers, walls and deck, while settlement occurs.

Shafer Contracting Co. Inc. serves as the general contractor on the project, which should be completed in 2022. CEG