Shelly and Sands Makes Improvements to I-70 in Ohio 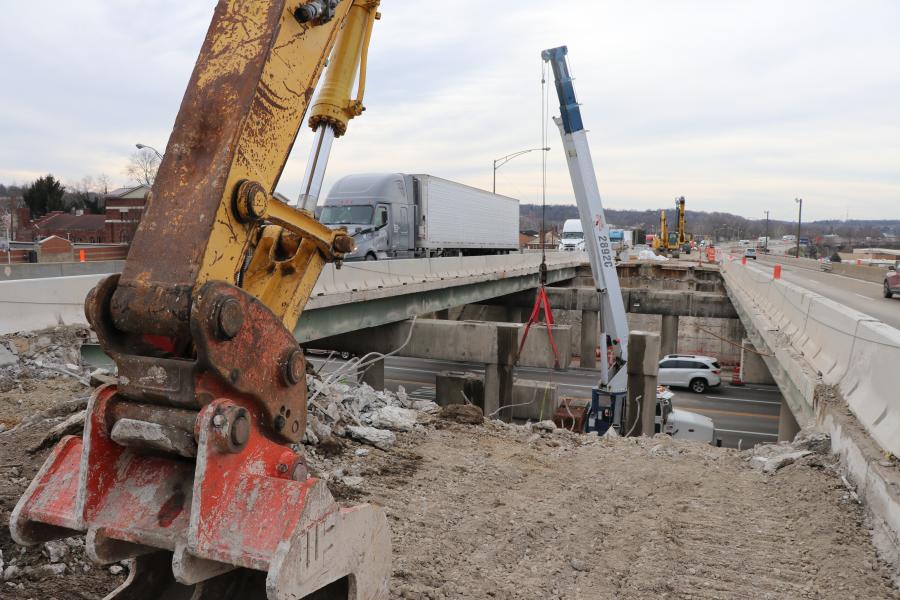 The Ohio Department of Transportation (ODOT) is overseeing the $88 million effort, which includes major bridge work and the resurfacing of I-70 between U.S. 40 and State Route 93 in Muskingum County. (Morgan Overbey photo)

Progress continues on a six-year project that will reconstruct I-70 through the city of Zanesville, Ohio. The Ohio Department of Transportation (ODOT) is overseeing the $88 million effort, which includes major bridge work and the resurfacing of I-70 between U.S. 40 and State Route 93 in Muskingum County.

"Failures of subgrade throughout the project limits and deteriorating pavement and bridge conditions have caused maintenance throughout this section to become excessive," said Audrey Seals, ODOT area engineer, who explained that construction will be stretched out over time. 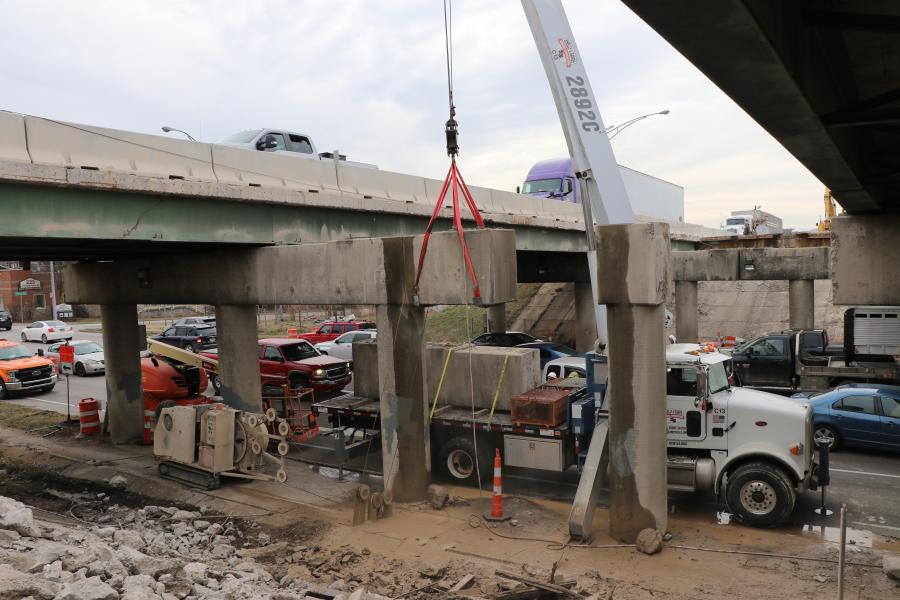 "The phasing of the project is difficult, as it is necessary to maintain two lanes of traffic in both directions, while also allowing as many ramps to be open as possible throughout Zanesville. Lane closures are only permitted during certain times, mostly at night, due to the volume of traffic that travels this section of I-70. There are 16 bridges that will be rehabilitated on this project, and some of them have limited access, so not all of them are able to be constructed at the same time."

Pre-Phase 1 work included constructing temporary concrete pavement widening, temporary lighting and installing portable concrete barrier to move traffic to the outside lanes for the Phase 1 configuration. It also required adding advance radar detectors on various signals throughout Zanesville to improve the traffic flow through town during construction. Two temporary signals also were added at the SR-93 on and off ramps to facilitate the detours to be used throughout the project.

"Phase 1 includes removing the existing median barrier and constructing new concrete barrier with the addition of new lighting on the concrete barrier," said Seals. "It also includes reconstructing the inside lanes and various ramps, which consist of full depth reconstruction of the pavement with cement stabilization of the subgrade, as well as various rehabilitation of 15 bridges and the removal of one bridge.

"Phase 2 entails constructing the eastbound lanes of I-70 and various ramps, which consists of full depth reconstruction of the pavement with cement stabilization of the subgrade, as well as various rehabilitation of 15 bridges and the removal of one bridge."

Phase 3 involves constructing the westbound lanes of I-70 and various ramps, while Phase 4 calls for milling out the sacrificial asphalt placed in phases 1-3, as well as existing pavement beyond the full depth reclamation limits on each end of the project between U.S.-40 and SR 93.

A large majority of the project is 100 percent state funded; however, there is federal funding included for culvert preservation, safety funding and bridge rehabilitation for one structure.

Current average daily traffic is 40,620. The project will serve residents of Zanesville, in- and out-of-state travelers and commercial freight traffic.

"Because I-70 is a critical truck route, it's imperative to keep this portion of Zanesville traversable to commercial traffic," said Seals. "Throughout the project, we will have narrow lanes with one-foot shoulders, various lane closures, which might cause slight delays, and a speed limit reduction to 45 mph while workers are present.

Seals noted that communicating any traffic pattern changes to the traveling public in a timely manner is key, as is listening to the concerns of motorists while making every effort to address their concerns.

"The overall rideability of this section of I-70 will be greatly improved, with less need for maintenance delays. This project will also improve the lighting, which will increase visibility. The acceleration lane on some ramps will be lengthened to allow for more merge time onto I-70." 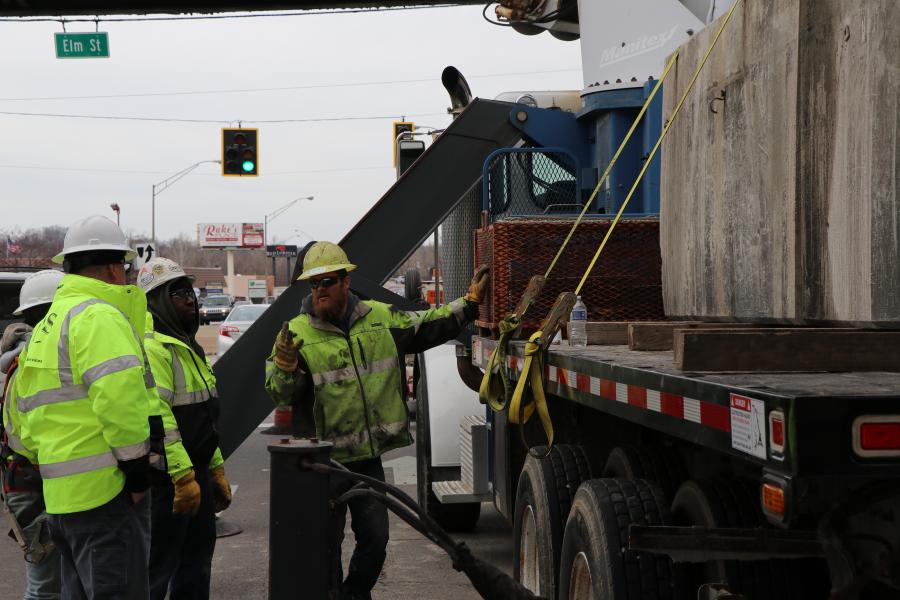 Shelly and Sands serves as the general contractor for the project.

"Shelly and Sands is a local contractor that's familiar with the city of Zanesville and understands the importance of this project and the amount of traffic that uses this section of I-70," said Seals. "They have also constructed a large number of mega-construction projects on the Ohio interstate systems around the state."

According to ODOT project manager Michelle Sidwell, the main concern for crews has involved the lack of right-of-way, resulting in narrow lanes and shoulders, creating a tight work zone for the public to travel and limiting access to the work zone for the contractor.

"Another challenge has been determining the sequential construction of the ramps along with construction of the main line, with elevation changes of the new pavement in each phase to ensure traffic has access in and out of Zanesville. Adequately maintaining the work zone and maintenance of traffic throughout the project, due to the poor condition of the existing pavement and the limited space in the work zone, is another challenge."

"The project is currently in Phase 1 and is working to remove the existing median barrier and demolition on various bridges, which includes superstructure and substructure removal," said Sidwell, who added that reconstructing I-70 through the city of Zanesville is no small undertaking.

"In order to get to the point of construction, our planning and design team has spent several years working on the project. District 5, along with our consultants, worked hard to survey, plan, get through the environmental process, design, move utilities and coordinate right-of-way needs. This has been a substantial effort, which also required a good amount of help and collaboration with the city of Zanesville."

Resurfacing I-70 between U.S. 40 and State Route 93 in Muskingum County requires, not surprisingly, a great deal of coordination.

"Once the cement stabilization of the subgrade is complete, six inches of 304 aggregate base and 8.5 inches of 302 asphalt base is placed, followed by 1.75 inches of asphalt intermediate course with a 1.5-inch asphalt surface course. Once the full depth reclamation section is complete, we will mill out the sacrificial asphalt and existing asphalt beyond the full depth reclamation section, then place intermediate and surface asphalt on the entire project from U.S.-40 to SR-93."

Work on the 16 bridges along the downtown corridor, including those over the Licking and Muskingum Rivers, will be time-consuming.

"All 16 bridges will have various rehabilitation applications performed on them, including full and partial substructure replacement, full and partial superstructure replacement, deck patching and the removal of one bridge," said Sidwell. "Some bridges will have aesthetic formliner and staining on the parapets and MSE walls and vandal fence with lettering to enhance the overall end product.

"The bridges were constructed when the interstate was originally built and have had various rehabilitation projects completed throughout the years but have deteriorated to a point where a major rehabilitation effort was needed. The time and cost of maintenance on these bridges was becoming excessive. Furthermore, design standards also have changed since these bridges were originally constructed, and the volume of traffic has increased, creating the need to perform various improvements on the bridges."

One bridge will be completely removed, embankment placed and new roadway constructed, as it is no longer needed. One bridge rehabilitation includes patching of the deck only. 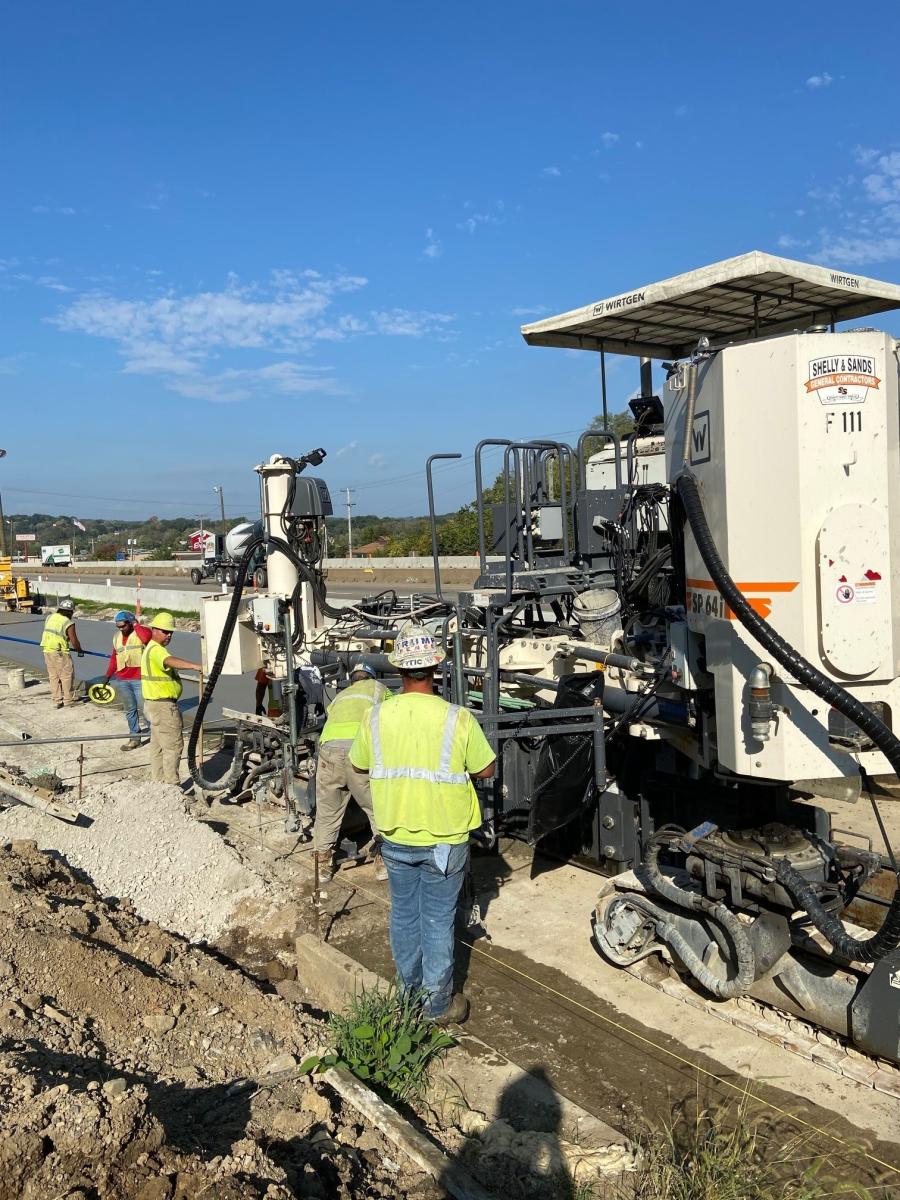 Excavation work entails regrading the shoulders on the ramps and mainline to meet minimum slope requirements, and to provide better drainage throughout this section of I-70. There is a total of 58,310 cu. yds. of excavation, 46,305 cu. yds. of embankment and 33,500 cu. yds. of concrete.

Along with bridge removal and rehab, key tasks remaining on the project include the removal of the existing pavement; cement stabilization of the subgrade; placement of the 304 aggregate base and asphalt for all of mainline on phases 1, 2 and 3, as well as the on and off ramps for State Street eastbound and westbound; the three ramps included in the Maple Avenue eastbound flyover on-ramp; the off ramp for Maple Avenue westbound, the on-ramp from 6th Street; and the 5th and 7th Street off-ramps. Demolition has begun on four bridges but has yet to begin on the remaining 11.

The rehabilitation on the Zanesville State Street Signature bridge — which will occur in the summer of 2022 while school is not in session — will be the first major milestone for crews. In addition, reconstruction of each ramp and reopening them to traffic at the State Street interchange will be a turning point in construction.

"Other major milestones will be the completion of each phase of construction," said Sidwell. "However, the most significant to the residents of Zanesville and the surrounding area is the completion of Phase 3, which will allow all ramps to be reopened to traffic, including the 6th street westbound on-ramp and Maple Avenue eastbound on-ramp, which have been closed since switching to Phase 1 in the fall of 2021 due to safety concerns."

Heavy equipment on the project includes:

Concrete, cement, asphalt, 304 aggregate, steel and rebar are among the main materials required.

Sidwell said the chief concerns when carrying out such a lengthy reconstruction project involve the safety of the traveling public, as well as project personnel, the effect on traffic and the effect on roads and area businesses.

"Staying on time and budget is important as well, as a project that is to occur over many years has the potential to be impacted financially, and weather and various events can affect time.

Added Sidwell, "It's very rewarding to see a job be built that directly affects your daily commute. I also know how important this project is to the community, and how vital this section of I-70 is to Zanesville." CEG