The cause of the collapse is yet to be known, though it is suspected the construction work was hurriedly done. 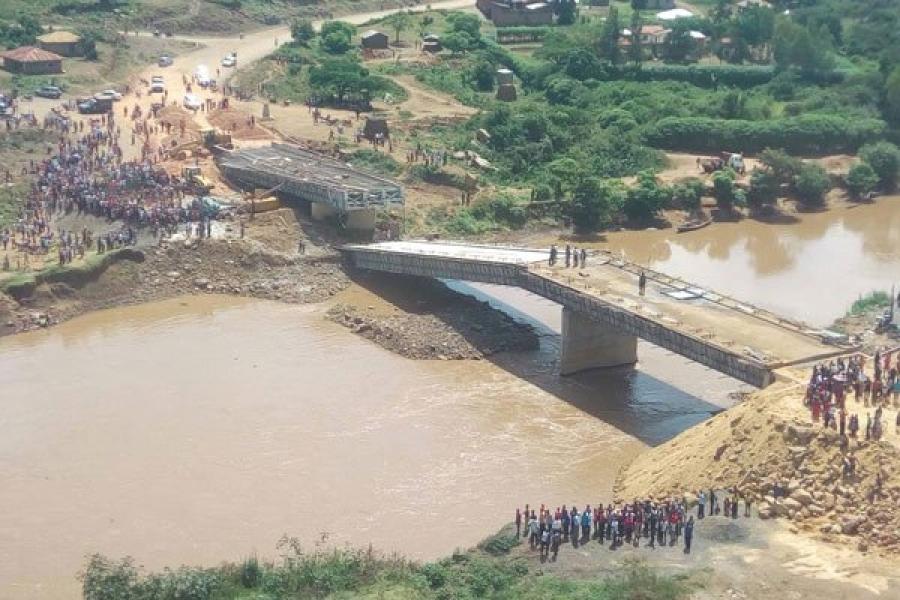 The iconic Sigiri Bridge under construction in Budalang'i Constituency, Busia County, has collapsed two weeks after President Uhuru Kenyatta visited the region to inspect it.

The cause of the collapse is yet to be known. though it is suspected the construction work was hurriedly done ahead of the president's visit.

During the inspection, Project Manager Jerome Xzue Hua said they were focusing their attention on the concrete slab and embankment.

“We did not focus much on road construction on the northern side because the most critical point of construction is the bridge's slab.

We expect to complete the bitumen work at the end of June for the entire 3 kilometers for both the northern and southern parts,” he had said.

The project, which was expected to be completed by end of July, will definitely fall behind schedule.

On August 30, 2014, 11 people perished after a boat they had boarded capsized, killing everyone on board as they attempted to cross the river.

Among those who perished was Brian Juma, a Form Three student at John Osogo Secondary School whose burial, among other victims, was attended by President Kenyatta who promised that a bridge would be constructed to avert such deaths.

During Mr. Kenyatta's tour, area MP Ababu Namwamba said the bridge was a blessing to residents since it would significantly reduce deaths and make it easier for people to access markets, schools and hospitals on either side.

Mr. Namwamba has been using the bridge as a campaign tool for his re-election for a third term and even broke ranks with opposition chief Raila Odinga to join forces with Mr. Kenyatta through his Labour Party of Kenya.

Residents who want to access Port Victoria town and its environs will now have to wait longer and forced to cover a 100-kilometre road daily from Bunyala North to Bunyala South, a distance of less than 3 kilometers across the river.

National Super Alliance (Nasa) leaders, Raila Odinga and Musalia Mudavadi, have told the President to take responsibility for the collapse saying that the project was shoddy.

They spoke while on a campaign tour in Bondo, Siaya County, where they claimed the Sigiri bridge collapse was an indication of massive graft and shoddy projects undertaken by the Jubilee administration.

Mr. Odinga said project that was conceived by the Grand Coalition government was hurriedly done by the Jubilee administration at the expense of the safety of residents of Busia County.

“The days of the Uhuru Kenyatta's presidency are numbered. They have failed Kenyans. Another stay in power will jeopardize the country,” he said.

The Government has since said the construction of the bridge has been suspended pending probe over the collapse and police have been involved to rule out foul play.

Infrastructure Principal Secretary John Mosonik said in a statement that the Kenya Rural Roads Authority had “dispatched a team of top Engineers to site to investigate the cause of the failure of the structure and will release more information as it becomes available.”

“The ministry has also contacted the investigative arm government to look into the matter to rule out any possible foul play,” he said.