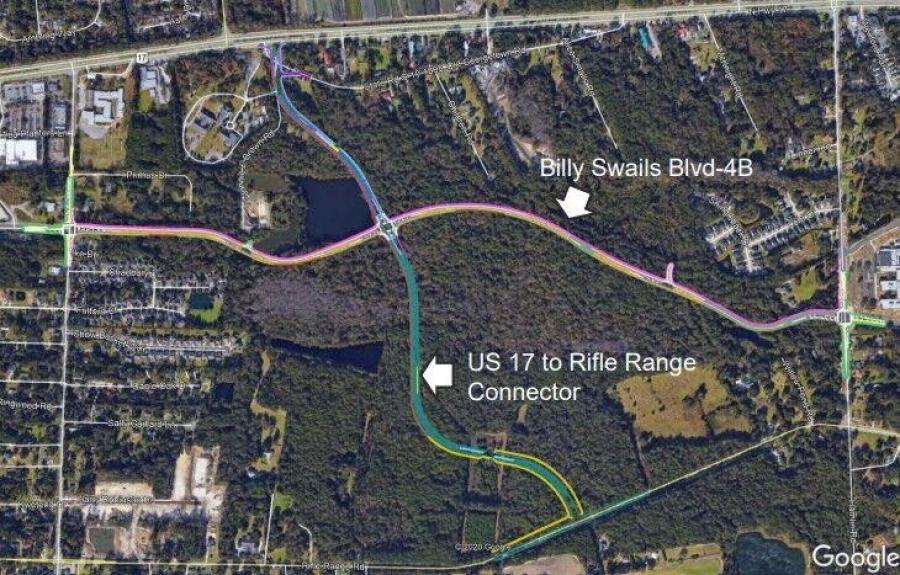 Construction on a new connector road between Rifle Range Road and U.S. Highway 17 in Mount Pleasant should begin within 60 days, a town official said March 7, 2022.

Construction on a new $10 million road destined to become an important connection in Mount Pleasant, S.C.'s transportation network should be under construction by late this spring.

Work on the two-lane connector, between Rifle Range Road and U.S. Highway 17 in the Charleston suburb, should get under way within two months, a town official told the Post and Courier on March 7.

Along the way, the road connector will intersect with the planned final segment of the Hungryneck Corridor and provide access to new town and county parks, the Charleston newspaper reported.

Paul Lykins, Mount Pleasant's deputy director of engineering and development services, noted that development-related fees are paying most of the project's cost.

According to Lykins, the road will be named after Vaughn Edward Kee, a 25-year-old Mount Pleasant rookie police officer who was struck and killed by a drunk driver in 1985 while arresting a different DUI suspect on Coleman Boulevard.

Several years ago, the city planned for the new road to connect directly to Long Point Road by moving the existing intersection on U.S. 17 slightly north. That would have required shifting Long Point Road across a corner of Boone Hall Plantation, but community opposition quashed the idea while knocking more than $6 million off the price tag.

Even without the once-proposed intersection, the new connector will allow northbound traffic from Long Point Road to quickly cut over toward Rifle Range Road, rather than making drivers travel a longer distance on always-congested U.S. 17.

"The purpose is to provide more intersections to spread traffic out," explained Lykins. "It provides better access and capacity to the transportation network and will provide access to county and park sites."

The Post and Courier noted March 7 that the 245-acre park site where the connector will be built was jointly purchased by Mount Pleasant and the Charleston County Park and Recreation Commission in 2010 for $20 million with most of the funding coming from the county's half-percent sales tax for transportation and green space projects.

The town, on the east side of Charleston Harbor from the larger city, plans to use much of its half of the property for new playing fields, while the county's half will be focused on passive recreation and trails.

Rifle Range Road will include a new intersection north of the traffic circle at the Liberty Hill Farm subdivision. The developer of that subdivision, Stefan Hoyer, agreed in 2016 to give the town $1.5 million toward the cost of the connector road as part of his development approval negotiations.

"It wasn't until [Hoyer] gave us the money that we could talk about taking [the road] all the way to Rifle Range Road," said then-Councilman Paul Gawrych in 2017, the Charleston newspaper reported. "In the end, you get a big grid."

The "big grid" Hoyer referred to is Mount Pleasant's plan to complete the Hungryneck Corridor, a third north-south road through the town sitting between Rifle Range Road and U.S. 17. All but the last section is currently in use.

The missing $14.6 million section of road will run from Six Mile Road near the Home Depot to Hamlin Road near Jennie Moore Elementary School, connecting existing but underutilized parts of the Hungryneck Corridor that have different names: Sweetgrass Basket Parkway and Billy Swails Boulevard.

Mount Pleasant hopes to seek bids for the final road section by the end of this year, the Post and Courier learned.