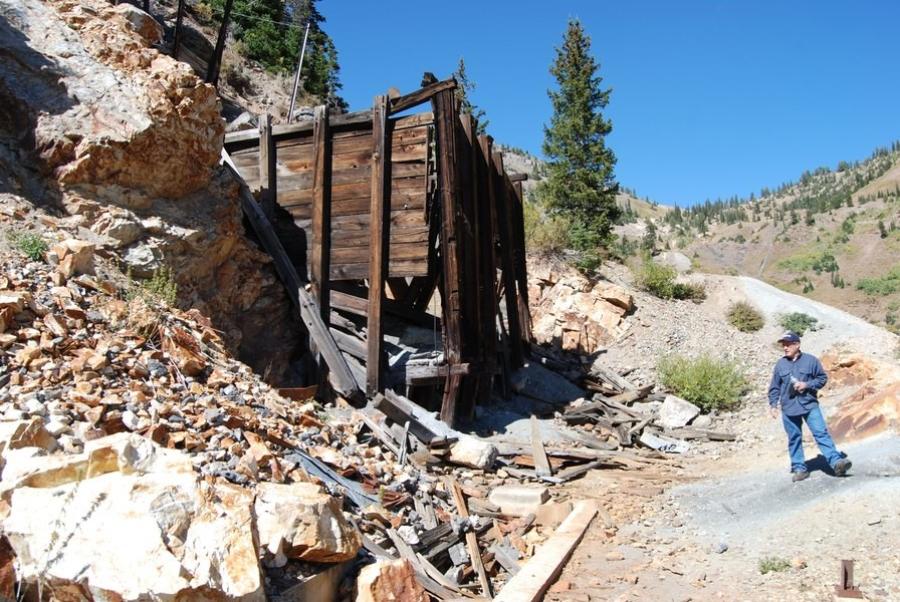 NAMPA, Idaho (AP) A century-old gold mine is a curious place, and that's a problem for those whose job it is to find bats and blasting caps as worrisome as the public finds them to be wondrous.

When the 2015 fire in Owyhee County finally burned out, a team of experts from the Bureau of Land Management followed closely behind the wildland firefighters assessing the safety of public land known as the Owyhee Front. The Soda Fire burned 280,000 acres in southwest Idaho and eastern Oregon. The blaze damaged 28 mi. of roads and 150 mi. of recreation trails, severely diminishing grazing acreage in Owyhee County and requiring the rescue of 283 wild horses.

But what concerned this BLM team were the abandoned gold mines that lay beneath the surface of the public land in the Owyhee Front — hazards exposed by the fire.

Abandoned mines are any mining sites that were vacated before Jan. 1, 1981, when BLM's surface management regulations took effect.

Those abandoned mines, and thousands more spread across Idaho, are an ongoing risk and expense for both Idaho and the federal government. Experts from the Bureau of Land Management, the Forest Service and the Idaho Department of Lands must balance limited funding, resource extraction, public safety and the unique problems that come from cleaning up messes dating back to the era of the Civil War. Gold mining of ore deposits in sand and gravel began in Silver City in 1863, and lode mining began in 1865 at the Morning Star mine in Silver City.

On BLM land alone, the Idaho abandoned mine lands staff have identified and inventoried 1,480 abandoned mine sites in Idaho and 8,224 mine features — which could be anything from a 200-ft.-deep mine shaft to an old building — on those sites. There are about 210 known mines on state land, more on Forest Service land and unknown numbers on privately held land across Idaho. The Idaho Geological Survey database has mapped 9,000 active, abandoned and prospect mine sites in Idaho but estimate that there may be 8,000 more not yet included in the database.

“We think there's probably double that out there,” Barbarick said.

When weather allows, BLM abandoned mine and minerals staff work from several field offices at sites across the state: cleaning an old mercury mine in Homedale, conducting emergency repairs on collapsing mines in Silver City, or monitoring potential contamination of streams and rivers from mining areas in the Coeur d'Alene Basin.

On April 25, the Idaho Press joined a few members of the abandoned mine lands staff from the state and Boise district offices in their first follow-up inspection of mine features in the Owyhee Front since their initial visit following the 2015 fire. After the Owyhee Front visit, BLM staff headed up to Silver City to continue repairing a mine that collapsed at the end of January.

The collapse of the Silver City gold mine created a 15-by-25-ft. sinkhole next to the community park and near a campground frequented by visitors. The mine shaft was showing signs of strain again in April, and its proximity to populated areas meant repairing it was a higher priority, said abandoned mines specialist Carrie Wontorcik. There are 19 abandoned gold or silver mines and 116 abandoned mine features — mine workings, structures, waste rock or ore piles — within a half-mile of downtown Silver City.

“We've been focused on Silver City because herds of Boiseans go up there,” Barbarick said.

Miners prospected for gold and other minerals across Owyhee County starting in the 1860s, drilling into the hills of the Owyhee Front until World War II slowed the work to a standstill. When the money for mining operations ran out, Barbarick said, miners usually dropped whatever they were working on and just left, leaving dynamite, blasting caps and precarious mines behind.

Before the Soda Fire burned through this area of the Owyhee Front, the abandoned mine staff knew there were likely a number of abandoned mines in the area that could be dangerous for anyone who stumbled upon them. However, the relative isolation of the area and thick grass covering the features meant discovery was unlikely.

Abandoned mine lands staff repair or restrict access to open mining features by filling them with polyurethane foam, back-filling with dirt, covering entrances with a metal grate, or installing a culvert with a grate for bats.

Even abandoned mine lands surveyors, tasked with estimating how deep into the ground or how far into the hill the mining tunnels go, don't go farther into the mines than they have to, if at all. Weathered rock and wood could have weakened the structural integrity of the mine entrance or tunnel, wildlife could be living inside, sharp metal rods could protrude from the wall or floor and water could obscure more dangerous objects. Barbarick said staff have found dynamite and old blasting caps left behind in Idaho mines. Sometimes, staff have had to call in the police bomb squad from the closest police force or the Mountain Home Air Force base.

“Even driving into an abandoned mine lands area is dangerous, because these workings go right under roads, and we've had a logging truck fall into an adit [mine entrance] in the Salmon Field Office,” Barbarick said.

The Soda Fire could have also caused more dangerous, unseen damage to the abandoned mines in the Owyhee Front. Fires near or in mines can change the air in the mine, even if it was previously safe to breathe. Barbarick said mines in the West don't usually emit the poisonous gases that coal mines back East do, but lack of oxygen or extra carbon monoxide can kill just as quickly.

For this reason, Barbarick said, the BLM surveyor who estimated the depth of one of the Owyhee mines to be 250 ft. deep, likely came to that estimate by gauging the amount of waste rock miners left near the site.

“He doesn't want to go into something he might not get out of,” Barbarick said.

There's an active claimant — someone who has located, staked and recorded a mining claim — on the Stewart Gulch mine, so the culvert the abandoned mine lands staff installed over one feature includes a locked grate. If the claimant ever applied and was approved by the BLM Minerals department to begin mining in that area, they would have to post a bond that would cover any further repairs on the site.

“That hazard is going to be taken care of by us or the mining claimant,” Barbarick said.

Despite the danger, people continue to explore — and sometimes, die — on abandoned mine lands.

In 1995, two men died from lack of oxygen while exploring the Vulcan Mine in North Idaho, after a campfire near the portal filled the mine with carbon dioxide, according to the Spokesman-Review. A mountain climber from Rexburg fell to his death rappelling into the abandoned Maryland Mine in the Salmon-Challis National Forest in 2003, the Associated Press reported. After remarking to his friends above that the air was a little thin, the rope went slack and he fell more than 100 ft. to his death. Barbarick said pine timbers had replaced the oxygen in the mine with carbon dioxide.

In early 2018, a Utah man murdered a teen couple and tossed their bodies down an abandoned silver mine shaft on private land in Eureka, Utah. According to a report by the Associated Press, the state is considering closing the mine and several others in area.

For this reason, BLM's abandoned mine lands staff are, like many in Idaho, concerned by the state's rapid growth. The rising population of the Treasure Valley, in particular, is changing the agency's priorities as it constantly evaluates which of the thousands of mine features need to be repaired or blocked immediately.

“One of the biggest challenges we run into is the thought that these mines have been around for 100 years and nobody has gotten hurt,” Wontorcik said. “Well, in the first 20 years, it was a working mine. People were in it and it was managed. The next 20 to 40 years, people just didn't have access out to these remote areas.”

That changed, Wontorcik said, with the popularization of ATVs and the subsequent rise of thrill-seekers documenting their adventures on social media. While they appreciate the problem stems from a revitalized interest in recreation on public land, people are rarely aware of the risk.

“Their ability to get out into these far-out places — where nobody has gotten hurt in the last 20 years — has grown exponentially,” Wontorcik said. “But so has the risk.”

Whether it's a young couple walking into a mine with nothing but two flashlights and two kids, or teenagers dropping pipe bombs down a shaft just to watch them explode, videos or social media documentation of mining features immediately bumps them up the list of features to be closed off from the public.

“This is why we do this — because people are curious,” Wontorcik said.