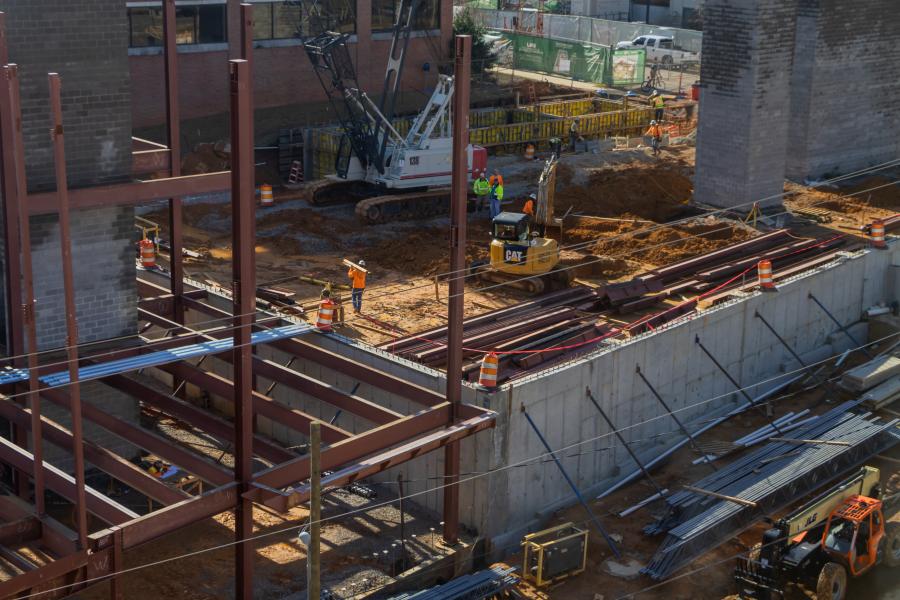 On time and on budget, the University of Alabama at Birmingham’s $24M Technology Innovation Center will house the fastest high-performance research computer in the state once complete in 2021.

Expected to open early next year, the new Technology Innovation Center (TIC) at the University of Alabama at Birmingham (UAB) will accommodate the campus Security Operations Center and Network Operations Center once crews complete work on the $24 million project. Located on the corner of 17th Street South and Ninth Avenue South, the 40,000-sq.-ft. center replaces the Rust Computer Center and will house the fastest high-performance research computer in the state. 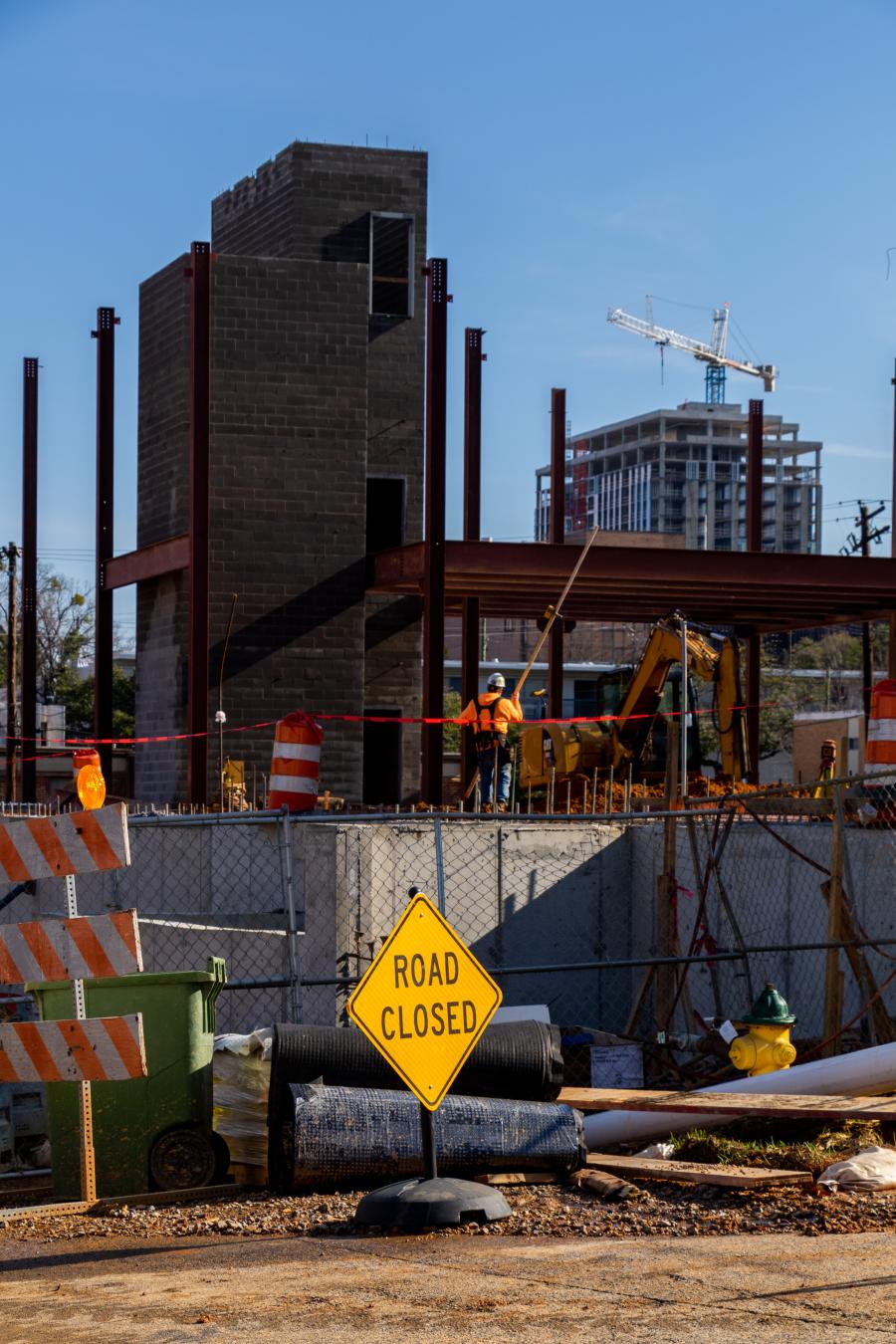 "The Rust Computer Center, the primary data center for campus, was built in 1969," said Curtis A. Carver Jr., Ph.D., vice president and chief information officer of UAB. "The staff footprint supported by this building and the power and cooling requirements of a modern data center have outgrown this legacy building.

The project, which is currently on schedule and budget, was designed to help transform the campus.

"The new TIC building is a component of UAB's strategic plan," Carver said. "This strategic plan provides a balanced and integrated approach to achieving UAB's goals. As UAB students, faculty and researchers constantly push the boundaries in research, education and medicine, there are demands for advanced technologies. This project will help ensure that UAB's information technology can grow along with UAB and be an enabler for UAB's vision and mission."

Carver noted that the project has required a tremendous amount of forethought:

"The budget is quite modest compared to similar urban projects in higher education. There's a lot more to be done, but we're pleased to see the progress, so far. This project has been a great partnership between UAB Administration, UAB Facilities and UAB IT. UAB IT employees have been involved at every step, ensuring we optimize the opportunity for a new technology innovation center.

"This project has been in the works since early 2016. It has enjoyed the strong and consistent support of the University of Alabama Board of Trustees and UAB administration."

Carver said that providing a state-of-the-art facility for UAB's data center and collaborative and individual workspaces for UAB IT employees is extremely significant.

"A world-class institution demands the support of world-class IT services," Carver stated. "This building will serve as a catalyst for future innovation and growth at UAB. While this will impact UAB IT employees, it will really impact the entire campus, as campus constituent groups partner and co-author the UAB of the future."

The building will be similar in style to UAB's Hill Student Center, constructed mostly from brick and glass. It will be 2.5 levels, featuring dedicated team workspaces, network and security operations centers, a data center and an analytics display in the lobby. 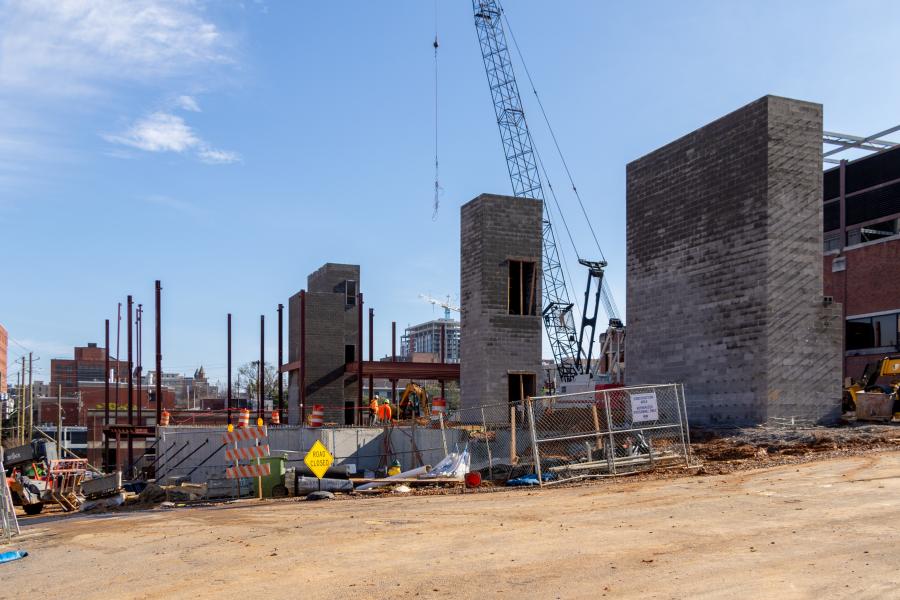 At the August 2019 groundbreaking, UAB President Dr. Ray Watts spoke about the importance of the investment to UAB and where it will take UAB IT and the university in the future.

Powering the TIC's data center is a cost-efficient Tesla Powerpack battery system. According to the official news release, the battery enables the structure to meet the technology needs of those involved, while also reducing the carbon footprint.

Denton Lunceford, UAB's assistant vice president, department of planning design and construction, said the project is not without its share of challenges.

"One of the biggest obstacles with this project is the limited site footprint," Lunceford shared. "UAB IT needed space, so the new building will be built to the boundaries of the site."

Site work and foundations are complete, with crews currently erecting the masonry and steel structure of the building. Lunceford said a great deal of planning went into preparing the property.

"Before we could begin construction on the building, we demolished two buildings on the project site and removed a parking lot. This building has a half-story below grade, so grading and excavating to the correct elevations, and waterproofing under the slabs, are of utmost importance. It's also a critical part of every project that the soils below the foundations have adequate bearing capacity."

UAB PD&C utilizes the expertise of Geotech and structural engineers to properly test the soil and concrete strength, to ensure that the building has a solid foundation.

"This building will carry a large electrical and mechanical load," Lunceford said. "Obviously, there are also a large amount of data/fiber conduits that enter the building. It was important that we work with our knowledgeable stakeholders, including our UAB IT team and Alabama Power Company representatives. It's imperative that we accurately anticipate how the technology, electrical capacity and mechanical loads interact to make a highly functioning and efficient data center."

As for unexpected issues, UAB officials said there was a small amount of unsuitable soil that had to be removed from the site, but this was not unusual on university projects. Low temperatures and wet weather have also been a consideration. 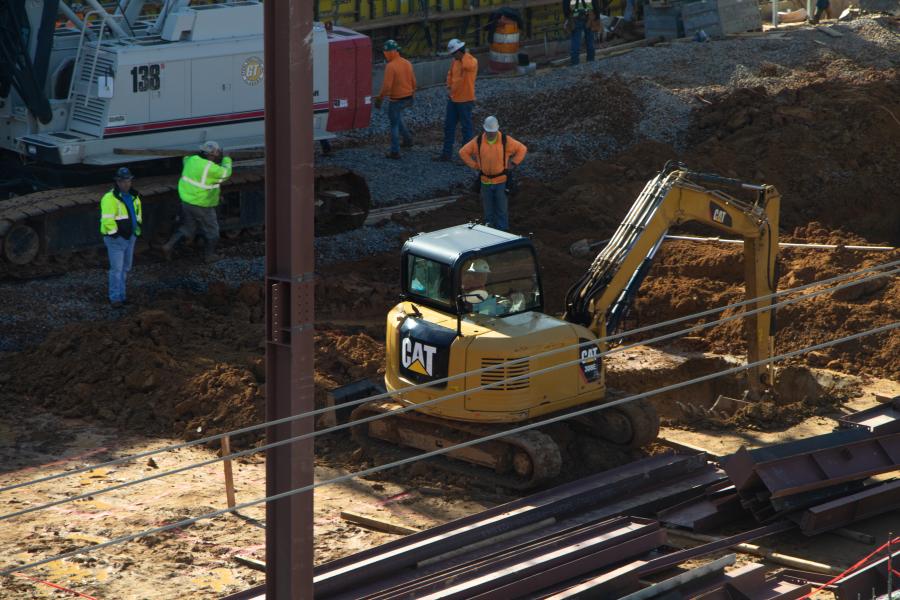 "Extreme cold can affect the ability to dig," Lunceford stated. "It also affects the ability to pour concrete. Temps must be 35 degrees Fahrenheit and rising for concrete to cure appropriately. Wet weather obviously impacts all exterior work, and this is the rainy season in Alabama."

Equipment being used on site includes a Caterpillar TL943D forklift, a JLG 943 forklift, a JLG 660SJ sky lift, a Sunbelt T550 CTL, a JCB 8035 mini-excavator and a Link-Belt 80-ton crawler crane. Although demolition of existing structures, dirt work, site utilities, concrete foundations, concrete block work at elevator and stair shafts and much of the steel structure of the building has been completed, many key tasks must still be tackled.

"The remainder of the structure has to be constructed, as well as the exterior skin, windows, building mechanical, electrical, plumbing and then all of the interior finishes," said Lunceford, who added, "HVAC and electrical systems in a data center are much more robust than a typical office or classroom building on campus. It is somewhat challenging, but this project has some of the most highly qualified contractors, engineers and commissioning consultants to help navigate the challenges."

Lunceford said the structure's architectural style will complement the campus:

"Over the past 10 years, UAB has incorporated a typical look and feel for its new construction that includes brick, limestone, glass and aluminum panels. This building will also feature these materials and connect visually to our more recent projects."

MJ Harris Construction Services LLC serves as the general contractor for the TIC. Construction began in June 2019 and is expected to be completed in January 2021. CEG