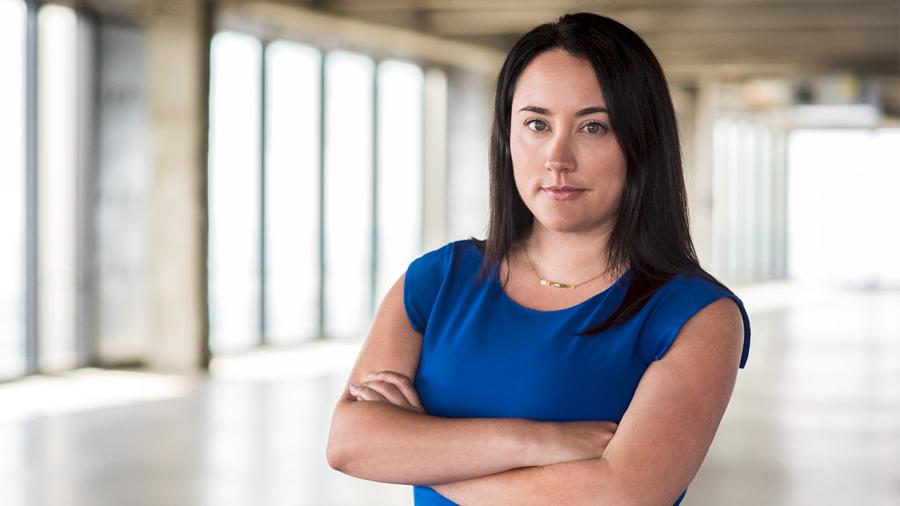 Throughout her childhood, Anita Nelson watched family members serve their community in a variety of ways. They were teachers, coaches and municipal employees and supported businesses through the local Chamber of Commerce. Inspired to make an impact in her community, she set out for a career in politics. When that didn't go as planned, Nelson turned to what some people would view as an unlikely career of service — the construction industry.

"I wanted to make an impact," said Nelson, who has turned her passion for building into an impressive 20-year career with some of the nation's largest firms. "Ultimately, I had a real interest in the built environment. My hometown had a waterfront redevelopment project that significantly benefited the area, which drew my interest. That's how I got into construction as a field. I applied for marketing jobs in real estate, construction and architecture. Suddenly, I was in the construction industry."

In 2019, Nelson joined Skanska USA Building as its chief strategy officer. As part of the senior leadership team for building operations, Nelson develops long-term business planning efforts based on emerging trends and harnessing market data and analysis to ensure the resiliency, viability and sustainability of the business. She also is a member of the Skanska Women's Network, an internal group focused on supporting women in the company and across the industry.

Nelson has established herself as an advocate for women in construction, serving on the board of the Women's Builder's Council from 2017 to 2019, where she hosted Women Build New York, an event focused on tackling issues around inclusion and creating a culture of diversity within the industry.

"It's been wonderful to be at Skanska," she said. "We're doing a lot of things that have an amazing impact on the world. Construction for me is a way to make tangible and lasting improvements to everything around you."

Nelson admits her career in construction wouldn't have taken the path it has if it weren't for her determination and the support of mentors along the way.

"I've gotten a ton of opportunities in my career because I was willing to take risks," she said. "I've also had leaders who provided sponsorship and great bosses who were willing to let me fly and move on to work for others. I'm forever grateful for that. Those individuals created a safe place for me to work and a safe place to take a risk. I always knew somebody had my back, and that makes all the difference."

Nelson entered the construction industry with no relevant experience. Not only was she inexperienced, young and a woman, she was sometimes viewed as unqualified. She had many challenges to overcome, but tenacity and drive helped her succeed.

"I ended up on a project early in my career and learned a hard lesson there," she said. "At that point in the industry, women were relegated to administrative functions. I ordered a lot of lunches. I took a lot of meeting minutes. I made a lot of copies."

Those risks Nelson mentioned? Perhaps the biggest risk of her career came very early on.

"I started in marketing, writing proposals to win work. I had an opportunity to be a contract analyst in Las Vegas for, at the time, the largest privately funded project in U.S. history since the Hoover Dam. Working on that project taught me nearly everything I know."

Her willingness to roll up her sleeves to do whatever was needed caught her colleagues' attention.

"I was thrown into a lot of rooms because they didn't quite know what to do with me and my skillset. Eventually, I began creating the client's board presentations on the progress of construction. It was a seemingly administrative thing, but it was important. I became the historian on this project in a way that didn't feel ‘less than.' This was a huge and rare opportunity. I sat between titans of the industry at quarterly meetings where negotiations and discussions were happening between these major firms. Then, I was operating a cost model for this $9 billion project. It put me in a position where I could be successful."

Nelson readily admits it wasn't just her drive or being in the right place at the right time that led to this opportunity. Her success has a lot to do with the help of others.

"The only reason this happened was because I had allies and managers who put me in a position where I could be successful. People gave me a range of unique opportunities in that world, which showed off my talent and allowed me to learn. I had the privilege and honor of being on that project with some amazing leaders."

Her advice to young women in the construction industry?

"It's important for people to always ask, ‘What else can I do?' I had to prove myself but having someone to answer that question and give me guidance was so helpful. People are often hesitant to ask, but it's about advocating for yourself with those who can and are willing to help you. Find people who are going to be on your board and help you out. I've never been afraid to speak up and ask questions, and this has served me well." CEG