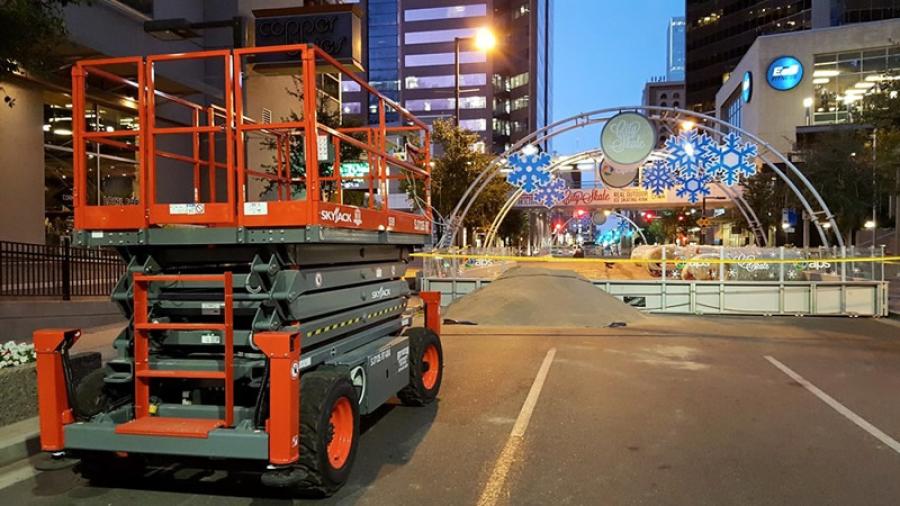 Skyjack brings festive cheers to Phoenix, setting up an ice skating rink in the center of downtown.

Skyjack helped bring holiday cheer to Phoenix during the Christmas season, assisting in the setup of an ice skating rink in the center of downtown. Skyjack dealer New Western Rentals partnered with customer Red Development to build the ice rink in the middle of Central Ave. in the CityScape area. Dubbed the CitySkate rink, it is the only real outdoor ice rink in the Salt River Valley.

“We have been a part of the CitySkate set up for several years now, and it is always a fun job site,” said Andrew Fox, general manager of New Western Rentals. “The Skyjack allows us to make the rink very festive and exciting.”

Red Development built up CityScape to be a central hub of downtown Phoenix, with Central Avenue being a popular shopping destination. Every year, the company builds an ice rink right in the middle of the street from mid-November to early January. New Western Rentals is a strong partner of Red Development, and has helped with the setup and takedown of the ice rink over the past few years.

New Western Rentals used a Skyjack SJ7135 to hang electric snowflakes and other decorations about the rink. The setup took three days, where crews started in the afternoon and worked until midnight every day.

“The ice rink is one of my favorite jobs to work on,” added Fox. “New Western Rentals is excited to continue being a part of this annual holiday project.”

Due to New Western Rental's continuous support on the project, the ice rink has welcomed delighted skaters for Christmas celebration every year. Using its Skyjack SJ7135, the company also helped dismantle the rice rink after the holiday season to restore the street space.

New Western Rentals has been using Skyjack scissor lifts since the company opened in 1997. The family-operated rental business owns a fleet of 18 Skyjack machines, including a SJ7135.

The SJ7135 has a high work height that makes it the perfect option to lift the heavy electric snowflakes.

With a wide extension deck, it allows up to four people on the lift at once to hang the decorations. The lift is also drivable at full height, allowing for more efficient use of time since it doesn't need to be lowered to move to a new location for every snowflake-light.

“We've been using Skyjack lifts ever since we got into aerial platform equipment,” said Fox. “For the ice rink and every other project we've worked on, the Skyjacks have been great. We wouldn't want to use anything else.”

Glendale, Ariz.-based New Western Rentals has been serving Phoenix metro area for almost 20 years. The family-owned company specializes in contractor equipment rentals, has a retail partnership with MQPower and Wacker-Neuson, and maintains a commercial contractor's license with the Arizona Registrar of Contractors, an agency the Arizona Legislature established to ensure high-quality construction through a licensing and regulatory system. The rental company also provides onsite forklift certification through its certified training staff.