Skyscraper Teeters on a Pedestal

The $1 billion skyscraper, called 1 Manhattan West, will balance on a 55.5-ft. pedestal. 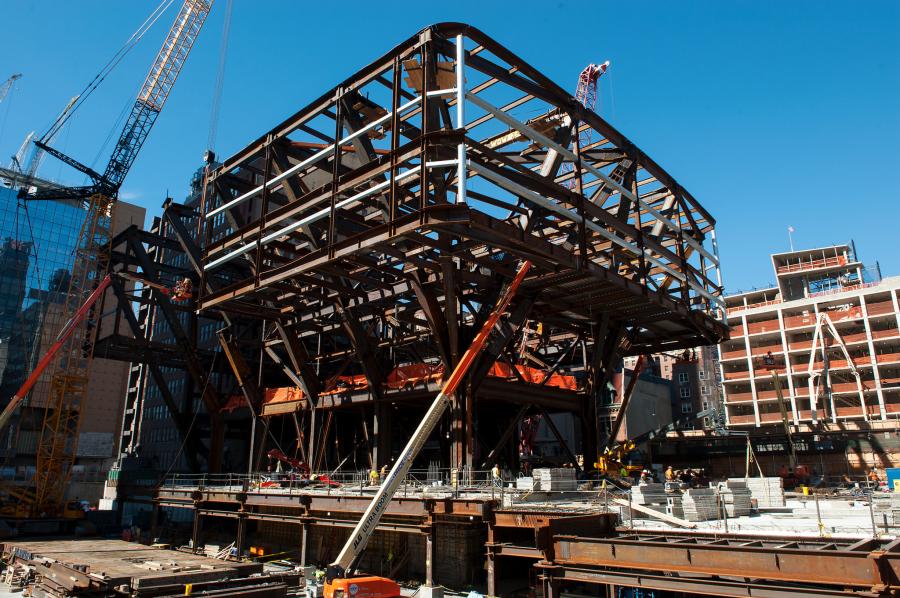 A steel core and pedestal form the base of 1 Manhattan West, a 995-ft. skyscraper under construction on the Far West Side of Manhattan. (New York Times photo)

In the city within a city rising west of Pennsylvania Station are many astonishing sights.

The most astonishing — for the moment, anyway — is a mammoth steel structure, as long as a city block, that seems to float 51½ feet over the ground at Ninth Avenue and 33rd Street.

With a volume of 1.2 million cubic feet, this structure alone would be more than enough of a building in most parts of New York City. But on the Far West Side of Manhattan, which is being redeveloped at a gargantuan scale, it is merely a pedestal for a skyscraper that will eventually soar 995 feet.

The $1 billion skyscraper, called 1 Manhattan West, will not simply sit on this pedestal. It will balance on it.

The pedestal extends 42 feet beyond the building's core to the north and south. The south overhang will suspend the tower over three parallel Long Island Rail Road tracks. The north overhang will act as a counterbalance.

“Nothing that is going to happen on this site is going to be conventional,” said Gary Haney, a design partner at Skidmore, Owings & Merrill, the architects and engineers of the Manhattan West project, which is being developed by Brookfield Properties.

Brookfield has owned part of the Manhattan West site since 1985, through its corporate predecessor, Olympia & York.

For decades, developers and city planners looked longingly at the open-air, below-grade rail yards between Penn Station and the Hudson River. But they were daunted by the logistics of building above active yards through which thousands of commuters pass every day. Construction did not begin in earnest until 2014 over the tracks west of 10th Avenue, on a project called Hudson Yards, atop more than 300 caissons drilled into bedrock.

A different approach was taken at Manhattan West, east of 10th Avenue. There, the rail yard has been covered with a deck made of precast, hollow concrete segments that will form a public plaza when the project opens in 2019.

The deck could not possibly hold the weight of giant office towers. Instead, 1 Manhattan West will rise straight out of the bedrock cliff on the north side of the rail yard. It will overhang the deck and some of the tracks below.

What makes the overhang possible are 75-foot-long diagonal braces, called kickers, that transfer the weight of the tower and pedestal into the building core.

As single pieces, the kickers would be too heavy for a crane to hoist. So they were broken down into three segments, each roughly 25 feet long.

On Sept. 15, the last kicker segment — with “Lift Weight 75 863 Lbs” spray-painted on the steel — was installed on the south side of the building. Despite its great weight, it seemed to float through the air. A single ironworker on the ground, holding the kicker at the end of a long leash, wrangled it into position, in concert with the crane operator.

Slowly, the bottom plate of the new segment came into alignment with the top plate of the previously installed segment. Two ironworkers, known in the field as bolter-uppers, waited in a bucket at the end of a cherry-picker. When the space between the plates narrowed to inches, they began the manual work of joining the two pieces.

Anyone who has ever been stumped assembling an Ikea sofa would marvel at the sight of a 38-ton piece of steel being snapped into place by a crew of four in a little over an hour.

"The assembly of the steel pedestal alternated from north side to south and back, to keep the weight of the overall structure in a constant state of balance," said Joseph Ross, an executive vice president at Tishman Construction, a unit of Aecom, the conglomerate that is serving as construction manager of 1 Manhattan West.

"Above the pedestal, construction will proceed in a conventional manner," Mr. Ross said, with a concrete core rising first and the steel exoskeleton following. The tower will have 67 occupied floors. The principal tenant will be the law firm Skadden, Arps, Slate, Meagher & Flom.

Rather than hide the unusual support system, Brookfield will highlight it with a cladding of travertine quarried about 15 miles east of Siena, Italy. Because the overhang eliminates the need for structural columns around the lobby, the exterior glass curtain wall will be almost diaphanous.

“The idea is that you're not reading the glass, you're reading the core,” said Christian Heimple, the vice president for construction at Brookfield. It promises to be a sight that will continue to astonish.