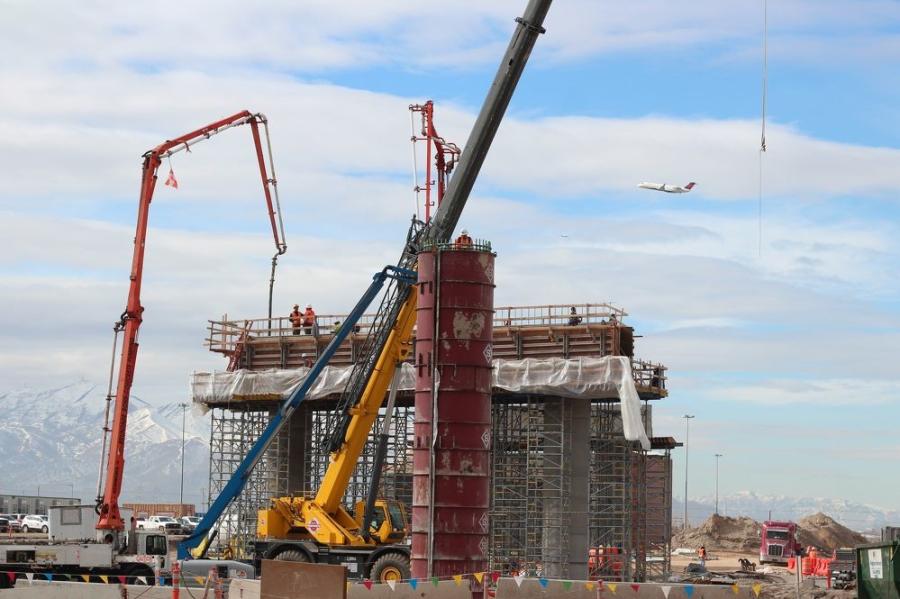 At a cost of approximately $4 billion, construction crews in Utah are working on the first new hub airport to be built in the nation in the 21st Century. The Salt Lake City International Airport (SLC) Redevelopment Project calls for replacing three aging terminals with one large, central terminal and two linear concourses connected by a passenger tunnel. It is the largest public service project ever built in Utah.

"The current facilities were built in the early 1960s for 10 million passengers," said Salt Lake City Department of Airports Executive Director Bill Wyatt. "In 2018, SLC recorded more than 26 million passengers. There is congestion curbside, in the gate hold areas and on the airfield. SLC has grown into a hub airport, and is Delta's fourth largest hub in terms of annual seats, and their third fastest growing hub." 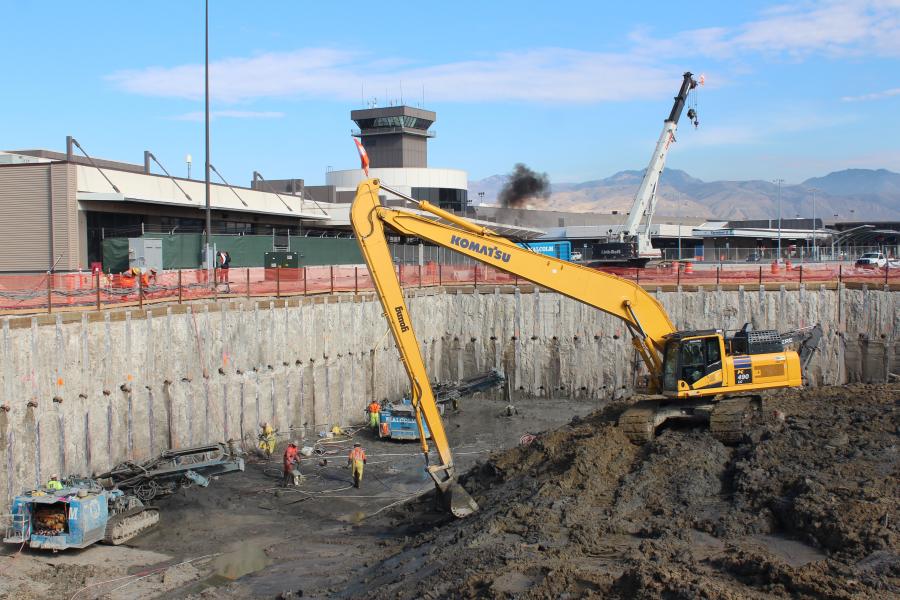 In addition, the existing facility does not meet seismic standards, while the new airport will meet or exceed them. It's also being built to today's security needs, with efforts underway to achieve LEED Gold certification.

Wyatt noted that the facility is being built to accommodate future demands.

"This design will allow the airport to build additional concourses to the north when needed. SLC is currently compiling a master plan that will address the growth of the airport for the next 20 years."

Wyatt also said travelers are not being significantly affected by the work taking place.

"The construction of the first phase of The New SLC has had little impact on passengers. Except for minor road changes into and out of the airport, passengers have not been negatively impacted. Passengers will experience more changes in the second phase, when the airport uses a combination of new gates with existing gates, as we tear down existing facilities and build the concourses to the east."

Early in the planning process, the airport decided that art would not be an afterthought, but integrated into the airport model.

"This foresight allowed the architects to work with an artist to incorporate large-scale art installations as part of the design. These installations will make a lasting impression on passengers traveling through The New SLC Airport."

The facility will be built in two phases. The first includes construction of the central terminal, parking garage and parts of the new concourses, and is expected to be complete by September 2020. No local tax dollars are being spent on the project, which is funded by user fees, primarily by airlines serving SLC, as well as savings, car rental fees, passenger facility charges and airport revenue bonds. 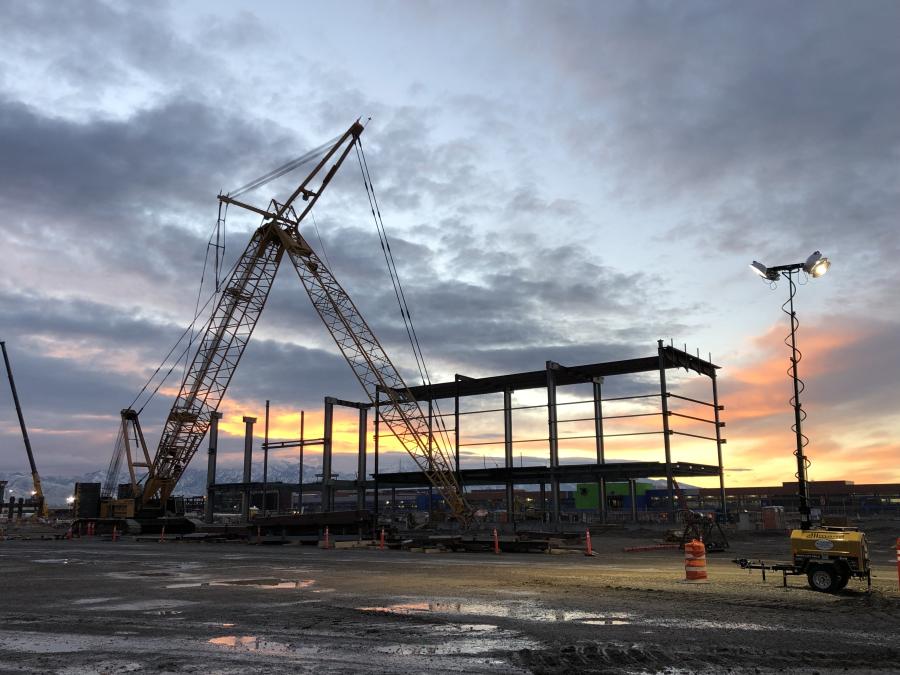 According to the official website, construction of the parking garage, elevated roadway, terminal and west ends of the south and north concourses has been visible since steel erection began in May 2017. Prior to the above-ground work, underground stone columns were installed to provide seismic stability, while steel piles were put in place to support the weight of the building. Crews installed 7,600 stone columns to stabilize the ground and drove more than 3,200 steel piles.

Salt Lake City Airport Redevelopment Program Director Mike Williams said the program currently averages approximately 1,825 trade workers. As for the biggest concerns when rebuilding an entire airport, "There can be limited impacts to the current airport operations. To achieve this, there is considerable planning whenever construction will occur close to the airside or landside operations."

Safety also is a key concern.

"There are trained safety staff on the construction, airport and program management teams," said Williams. "Anyone spending time onsite must attend safety training."

Like with any major construction project, there are obstacles that must be addressed.

"The job market is extremely tight with a lot of opportunities, so keeping trade workers on the project for the duration is challenging," said Williams. "Keeping the entire team focused and excited about the finish line requires the celebration of milestones along the way." 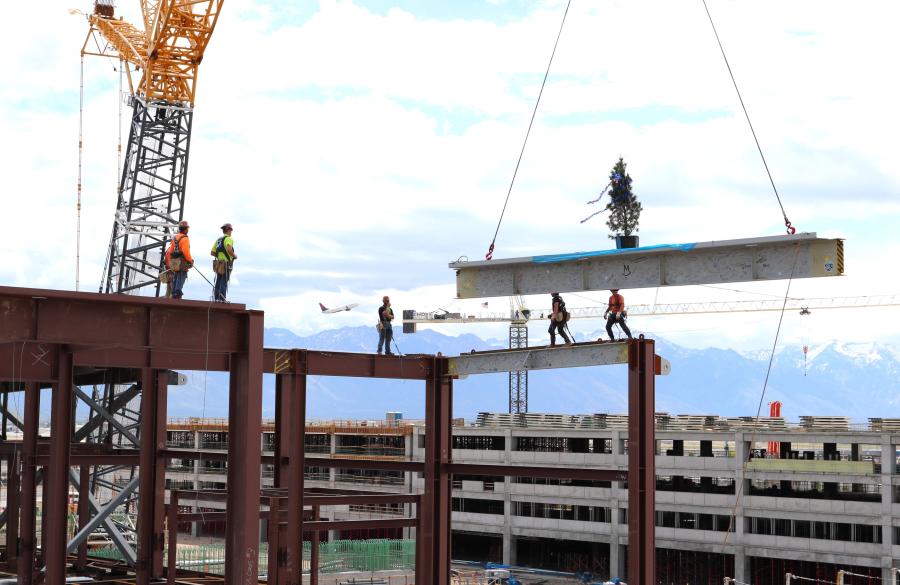 Williams noted that detailed construction schedules and phasing plans help keep the project on target. The major focus right now is interior finish construction and the installation of the technology system. Construction on the program actually began in July 2014, and will continue in phases through 2023/2024. The parking garage, terminal building and west portions of the north and south concourses will be completed in 2020.

The airport's 1.7 million-sq.-ft. parking garage will feature 3,600 parking stalls, which is twice the number of stalls in the current structure. It also includes four escalators, 9,000 tons of rebar, 90,000 cu. yds. of concrete and is the size of three football fields.

Regarding sustainability efforts, the new airport will connect to public transit, make use of water-efficient plumbing fixtures, purchase 2.1 MW of off-site Green Power through Rocky Mountain Power, procure a minimum of 20 percent of materials locally containing recycled content and divert more than 95 percent of construction waste from the landfill. In addition, the linear layout of The New SLC will be more efficient than the current pier configuration, reducing taxi times and aircraft idling while waiting for a gate. Also, more windows will result in more natural light, which is environmentally friendly.

A wide variety of equipment is being used on the project. Heavy machinery required to complete the work includes 90-ton rough-terrain cranes, a Grove RT890E, paving equipment, lulls and lifts, backhoes and heavy haulers. 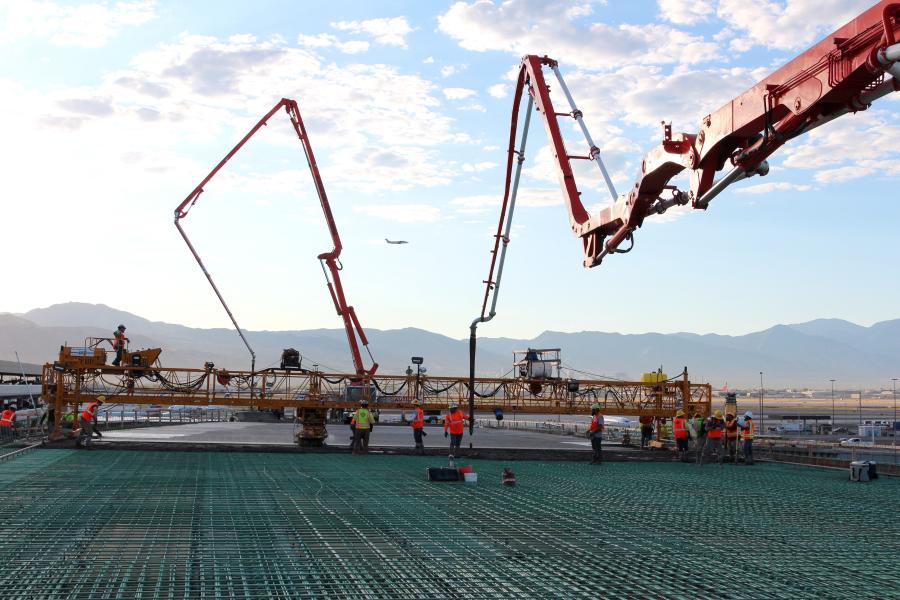 "Each request must be evaluated to determine if it is ‘a must have' or ‘a nice to have', and then must be analyzed against the budget and schedule before bringing it to the executive team for approval.

The project team for The New SLC is HDJV, a joint venture of Holder Construction and Utah's Big-D Construction, which is responsible for work on the car rental facilities, central utility plant, parking garage, elevated roadway, south concourse, terminal, central tunnel, airfield paving and economy parking. The project team for the north concourse is a joint venture between Austin Commercial and Okland Construction. HOK serves as the architectural firm.

SLC is operated and managed by the Salt Lake City Department of Airports. Salt Lake City's Mayor, the City Council and a nine-member advisory board of citizen volunteers oversee its affairs. SLC is the 23rd busiest airport in North America, and the 85th busiest in the world. More than 370 flights depart daily to 99 nonstop destinations. CEG