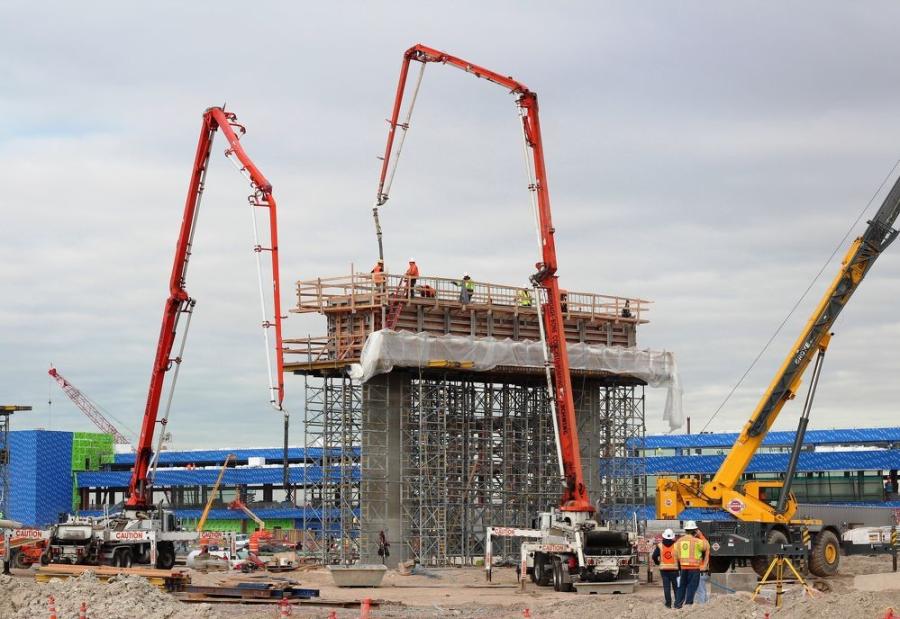 The price tag on the facility, slated to meet LEED Gold standards, is up by about $700 million from the original estimate of $2.9 billion, which comes with some serious economic impacts and no local tax monies. (Salt Lake City Airport photo)

With just two years to go before Salt Lake City unveils its new state-of-the-art airport, the project is on track, and bigger than ever. Literally. Since work began on the new terminal, the south concourse and other associated facilities, the city added a second, north, concourse.

"That was something that was not part of the original plan," said Nancy Volmer, director of public relations and marketing of the Salt Lake City Department of Airports. "It just made sense to do it while we have the other construction going. That was a major addition to the project. It basically changed the scope. The plan now is to open at the end of 2020. The first phase which will include the parking garage, central terminal and west end of the south concourse will open in the fall of 2020. The west end of the north concourse will open late 2020. In 2024-2025, we will have a totally new airport and the existing airport will be demolished."

The new price tag on the facility, slated to meet LEED Gold standards, is up by about $700 million from the original estimate of $2.9 billion, which comes with some serious economic impacts and no local tax monies.

"We were the only large-sized hub airport with savings," Volmer said. "We had almost 50 percent of the total project in savings."

Other funding will come from the sale of bonds, passenger and rental facility charges, and federal grant money." 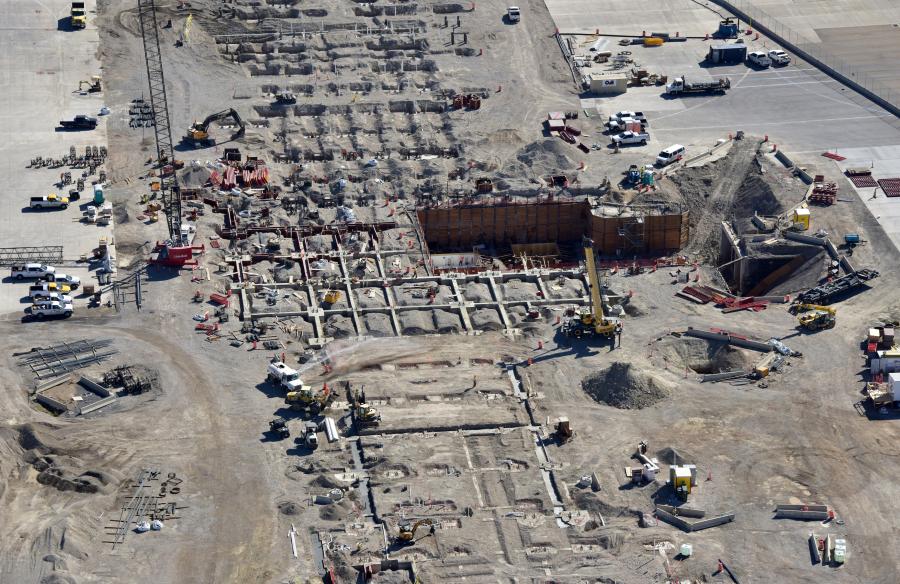 Austin Okland Joint Venture won the bid for the 837,000-sq.-ft. north concourse and are currently working on the substructure with plans to begin steel work in November this year. The project will be completed in two phases. Phase one, with 15 gates, will be ready Dec. 2020, said Chandler McClellan, construction manager of AOJV. "The Phase One balance of 20 personal boarding bridges (PBBs) will be done in June 2021 and Phase Two which adds another 10 gates will be complete December 2023."

The project comes with any number of challenges, not the least of which is working within 15 ft. of an operating airport.

The existing airport sees 340 flights daily, with roughly a quarter of those coming by the work site, McClellan said. "So, we can't do it all in one shot. We have to do it in parts and pieces. The airlines trump anything we do and we build with them in mind." 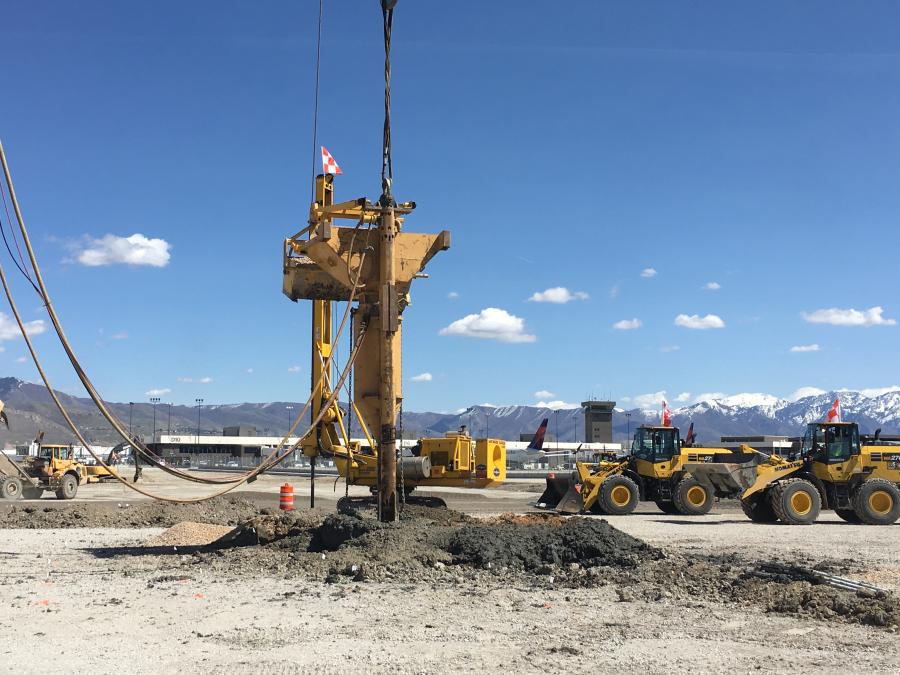 The water table on the site is close to the surface, requiring crews to install dewatering wells 60 ft. below. The water is pumped into tanks, filtered and then released into the storm drain. Workers also installed about 2,080 stone columns.

"Here, there is a lot of alluvial sands, so we have to do soil improvement," McClellan said. "We have to densify the soil. You have a big probe that goes into the earth 40 feet and is basically injecting gravel into the ground, compacting the earth."

Meanwhile, on the original portion of the project, iron workers — an average of 100 on site daily — installed 20,400 tons of structural steel for the south concourse, the terminal gateway and the IAB connector, which connects the new terminal to the existing terminal connector, said Fred Groome, senior general superintendent of Holder Big D Joint Venture (HDJV). 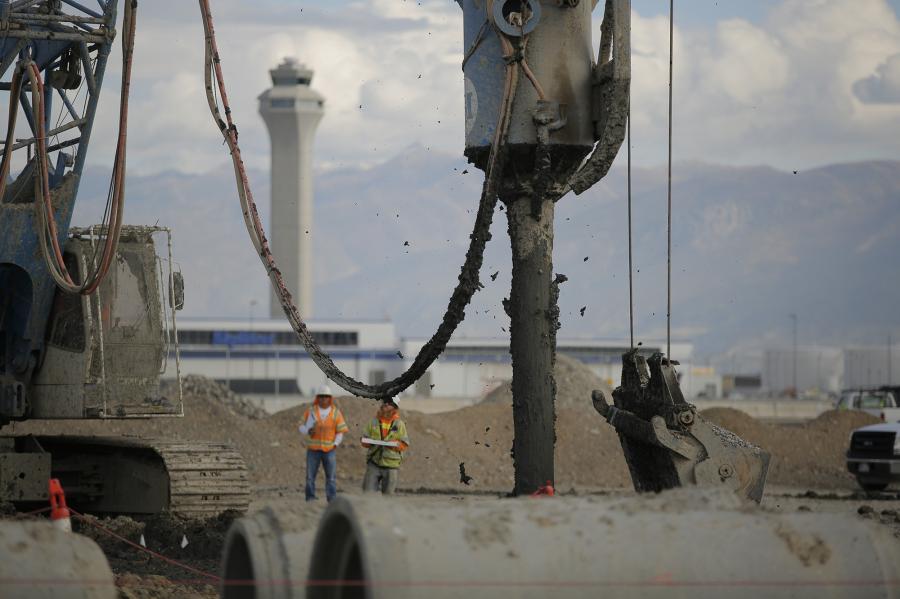 "We started with Liebherr LR 1200s and brought out the LR 1600 when we started the terminal sequence. We did the concourse in 27 weeks and the terminal in about 36 weeks. Seven tons of the 20,400 tons was in the concourse; the balance was in the terminal gateway and IAB connecter. The steel erection is near completion. We're still doing deck and detail and we are in progress of installing our skin."

Other statistics for the terminal and north concourse include:

"The most important part of what we do when we build next to an existing facility is zero impact to existing operations," Groome said. "We're focused on building on time and maintaining a budget, but we also have to keep existing operations going with no impact. It's most interesting and most complex. 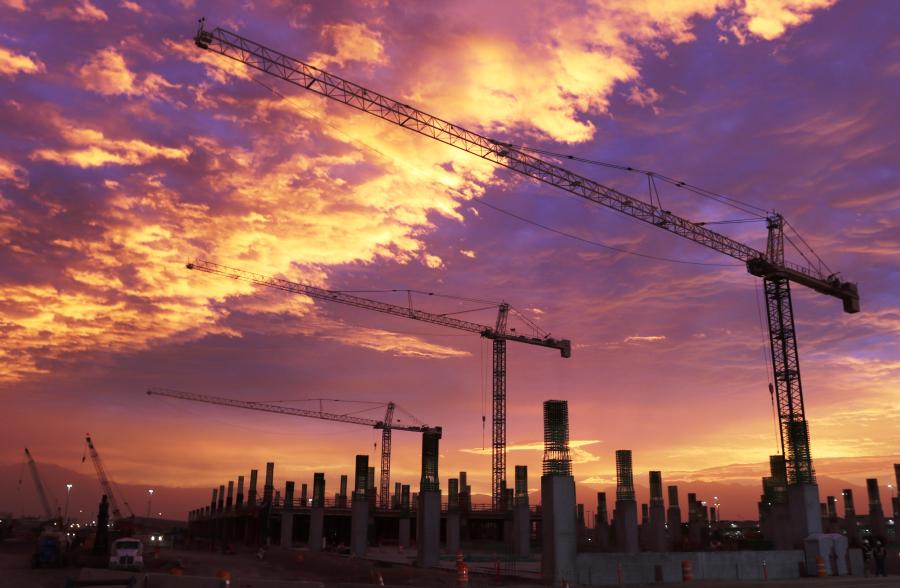 "When you look at airport construction, there is just so much technology involved — WiFi-distributed antennas, security, baggage equipment, technology in the baggage standing devices. All of the public comes through here, so you have to have a higher level of finish. I like that the architecture is based on that. We can see the airfield and feel a part of it; but the higher-level finishes and open spaces and a lot of art that gets integrated, that is pretty special, as well.

"Thirty or forty years ago, it wasn't as important to feel a part of the airfield. It's a wonderful experience. On top of that, with all the glass, you also see the beautiful views of the mountains."