The contract is the biggest yet issued in the troubled relief effort. 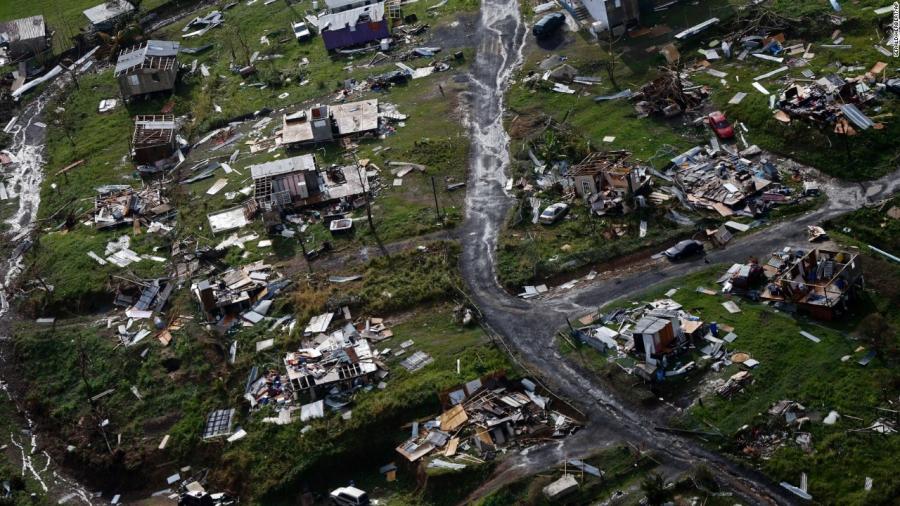 he commonwealth, strapped for funds before Hurricane Maria hit, is expected to run out of cash as early as the end of the month, according to people familiar with the island's finances.

For the sprawling effort to restore Puerto Rico's crippled electrical grid, the territory's state-owned utility has turned to a two-year-old company from Montana that had just two full-time employees on the day Hurricane Maria made landfall.

The company, Whitefish Energy, said last week that it had signed a $300 million contract with the Puerto Rico Electric Power Authority to repair and reconstruct large portions of the island's electrical infrastructure. The contract is the biggest yet issued in the troubled relief effort.

Whitefish said Monday that it has 280 workers in the territory, using linemen from across the country, most of them as subcontractors, and that the number grows on average from 10 to 20 people a day. It said it was close to completing infrastructure work that will energize some of the key industrial facilities that are critical to restarting the local economy.

The power authority, also known as PREPA, opted to hire Whitefish rather than activate the “mutual aid” arrangements it has with other utilities. For many years, such agreements have helped U.S. utilities — including those in Florida and Texas recently — to recover quickly after natural disasters.

The unusual decision to instead hire a tiny for-profit company is drawing scrutiny from Congress and comes amid concerns about bankrupt Puerto Rico's spending as it seeks to provide relief to its 3.4 million residents, the great majority of whom remain without power a month after the storm.

“The fact that there are so many utilities with experience in this and a huge track record of helping each other out, it is at least odd why [the utility] would go to Whitefish,” said Susan F. Tierney, a former senior official at the Energy Department and state regulatory agencies. “I'm scratching my head wondering how it all adds up.”

PREPA's executive director, Ricardo Ramos, and a spokesman did not respond to emails asking why the utility didn't activate the mutual-aid network. On a tour of the idled Palo Seco power plant, Ramos told reporters that Whitefish was the first company “available to arrive and they were the ones that first accepted terms and conditions for PREPA.”

Ramos said that the utility is “completely content” with the work Whitefish is doing. “The doubts that have been raised about Whitefish, from my point of view, are completely unfounded,” he added, saying that concerns about Whitefish were probably spread by jealous competitors.

Whitefish officials have said that the company's expertise in mountainous areas makes it well suited for the work and that it jumped at the chance when other firms were hesitating over concerns about payment. The company acknowledges it had only two full-time employees when Maria struck but says its business model calls for ramping up rapidly by hiring workers on short-term contracts.

Spokesman Chris Chiames dismissed criticism about the company's qualifications. “We are taking personal risks and business risks working in perilous physical and financial conditions,” Chiames said. “So the carping by others is unfounded, and we stand by our work and our commitment to the people of Puerto Rico.”

Whitefish Energy is based in Whitefish, Mont., the home town of Interior Secretary Ryan Zinke. Its chief executive, Andy Techmanski, and Zinke acknowledge knowing one another — but only, Zinke's office said in an email, because Whitefish is a small town where “everybody knows everybody.” One of Zinke's sons “joined a friend who worked a summer job” at one of Techmanski's construction sites, the email said. Whitefish said he worked as a “flagger.”

Zinke's office said he had no role in Whitefish securing the contract for work in Puerto Rico. Techmanski also said Zinke was not involved.

Techmanski said in an interview that the contract emerged from discussions between his company and the utility rather than from a formal bidding process. He said he had been in contact with the utility two weeks before Maria “discussing the 'what if' scenarios” of hurricane recovery. In the days after the hurricane, he said, “it started to make sense that there was a need here for our services and others.”

On Oct. 19, Techmanski told CNN simply: “We called each ­other.”

The scale of the disaster in Puerto Rico is far larger than anything Whitefish has handled. The company has won two contracts from the Energy Department, including $172,000 to replace a metal pole structure and splice in three miles of new conductor and overhead ground wire in Arizona.

Shortly before Maria ravaged Puerto Rico, Whitefish landed its largest federal contract, a $1.3 million deal to replace and upgrade parts of a 4.8-mile transmission line in Arizona. The company — which was listed in procurement documents as having annual revenue of $1 million — was given 11 months to complete the work, records show.

Puerto Rico has 2,400 miles of transmission lines across the island, and 30,000 miles of distribution lines with 300 substations. Jeff Hawk, a spokesman for the U.S. Army Corps of Engineers' power restoration task force, estimated that 80 percent of the grid has been damaged. A month after the storm, about 80 percent of customers remain without power.

With the entire Puerto Rican commonwealth in bankruptcy, and the utility itself in default on $9 billion in debt, spending for the recovery is drawing scrutiny from the Trump administration and Congress. Gov. Ricardo Rosselló and José Carrión, chairman of the federal oversight board created to resolve the island's long-running financial crisis, were summoned to Washington last week for a meeting with the Office of Management and Budget.

The House Committee on Natural Resources is examining Whitefish's role in Puerto Rico, said Parish Braden, a spokesman for the committee. The hiring of the little-known company has been noted by the trade publications Utility Dive and E&E News.

“The size and unknown details of this contract raises numerous questions,” Braden said. “This is one of many things the committee is taking a close look at as it continues to work with the resident commissioner, governor's office, and oversight board to ensure Puerto Rico's recovery is robust, effective and sustained.”

Rosselló said Oct. 18 that the island would spend $490 million on the initial phase of repairing the commonwealth's grid, adding that “a large portion of that would probably go to Whitefish” and another contractor. The utility gave Whitefish a $3.7 million initial payment for “mobilization of personnel and equipment,” the contract says. Whitefish could be paid as much as $300 million for up to two years of work.

Under the contract, the hourly rate was set at $330 for a site supervisor, and at $227.88 for a “journeyman lineman.” The cost for subcontractors, which make up the bulk of Whitefish's workforce, is $462 per hour for a supervisor and $319.04 for a lineman. Whitefish also charges nightly accommodation fees of $332 per worker and almost $80 per day for food.

Only eight contracts larger than $20 million have been approved for Puerto Rico by the Federal Emergency Management Agency and the Army Corps of Engineers, with half of those for shipments of food and bottled water. Whitefish's contract surpasses the $240 million contract the Army Corps awarded to engineering giant Fluor to “augment ongoing efforts” to repair the power grid.

The commonwealth, strapped for funds before Hurricane Maria hit, is expected to run out of cash as early as the end of the month, according to people familiar with the island's finances. And even if the Senate and the president approve the House's $4.9 billion aid package for Puerto Rico, the island might need more money in as little as three months.

PREPA did not reach its agreement with Whitefish until Sept. 26, six days after the storm swept through. By comparison, the Florida utility FPL requested mutual aid before Hurricane Irma hit. The result was an army of nearly 20,000 restoration workers, including FPL employees, from 30 states and Canada at work on the first day.

On Oct. 1, FPL had teams assembled to assess damage in Puerto Rico. It posted notices in Spanish and English on its Facebook page: “FPL is ready to help Puerto Rico.” Florida Gov. Rick Scott mentioned the offer in a news release.

The Florida utility says it never received a reply. The Puerto Rican utility has not replied to offers of assistance from mutual-aid partners, according to the American Public Power Association, which coordinates such operations.

Techmanski called the damage in Puerto Rico “among the worst that I have ever seen” in more than 20 years of work rebuilding power lines after storms. According to his LinkedIn page, Techmanski has held leadership roles in utility service companies based in Vancouver, Texas and California.

“It will take months, if not years, to repair the entire grid to full operational status,” he said.

NBC Montana quoted Techmanski in a report Oct. 1 as saying he had asked Zinke for help in getting personnel and equipment to the territory. Chiames, the Whitefish spokesman, confirmed that “Once the company got the go-ahead from PREPA on September 26 to begin work, company executives did reach out to contacts in case they could help expedite getting qualified linesmen to the island.”

Zinke's office said: “The Secretary always politely listens when citizens and the small business community approach him with concerns and ideas. Neither the Secretary nor anyone in his office have taken any meetings or action on behalf of this company.”

Whitefish's Twitter feed features videos of workers dangling from helicopters and describes its progress but also suggests the work has been challenging.

In one post, a team was reported to have set up six concrete poles, but had “all day issues with material.” A crane showed up “broke and we had to fix it.” Equipment in a warehouse had rusted. Narrow roads were cited as a safety concern, as were “very large termite nests.”

Techmanski said that Whitefish was focusing on fixing key transmission lines and was using helicopters and cranes to reach them. “Once we complete those, the effort's going to move on to other transmission and distribution systems,” he said. “So we're just ramping up and providing as many people as we possibly can.”

Kent McNellie, an investment professional at HBC, the Texas investment firm that is now the largest financier of Whitefish, said the company's experience reconstructing a one-mile power line destroyed in a wildfire in Washington state was more relevant to Puerto Rico's needs than is the experience of many companies on the mainland. The span in Washington included an elevation change of about 5,000 feet, and the terrain required crews and equipment to be delivered by helicopter.

“Most guys go up in a 30-foot bucket truck, and they can do that from Texas to New York, but you don't need an army of bucket trucks,” McNellie said. “Andy realized you had a transmission problem and that requires 90-foot buckets, 100-foot ladders and helicopters — that's not the typical crew you can get through mutual aid.”