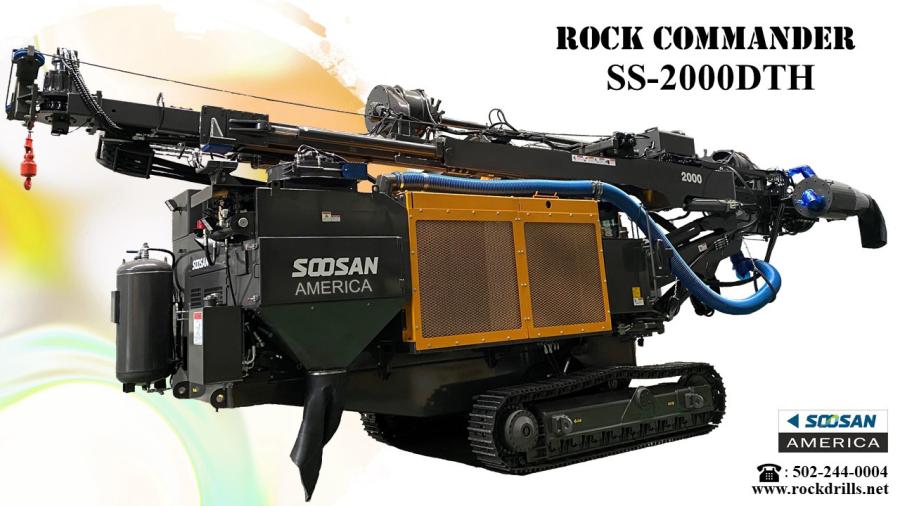 The SS-2000 DTH drill rig is one of the most advanced, comfortable, reliable, productive and easily serviceable drill rigs on the market with high penetration rates and low fuel consumption, according to the manufacturer.

Powered by the Cummins a X15 Tier IV/ stage 5 diesel engine, the SS-2000 is ready to tackle 4.5-to 8-in. holes. Producing 950 cfm of air at 350 psi, it has the capability to power the DTH hammer and clear holes with ease, according to the company.

The operator cabin has an 8-in. touch screen monitor which enables the operator to view and check equipment status and system functions with a touch of the hand. Drilling depth and drilling angle are displayed in real time on the monitor to enable the operator to produce the necessary holes.

Many of the systems on the new DTH Rock Commander are customizable to meet the needs of the job. The operator can adjust the pulsing time and on/off function of each filter in the dust collection system to reduce the amount of free dust particles produced during the drilling operation.

Fine control of the lubrication oil flow on the new Rock Commander SS-2000 enables the operator to keep the hammer properly lubricated under all conditions. Controls also allow for the increase or decrease of the flow to the cooling pump to control the rpm's of the fan, giving the SS-2000 the ability to operate even in the harshest environments.