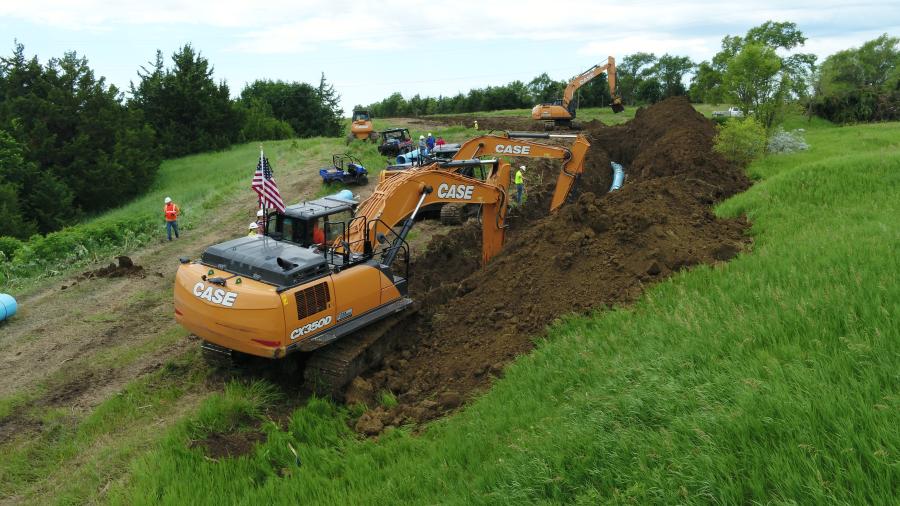 Leading the charge is a Case CX350D excavator equipped with a 2D Leica Geosystems machine control system, which allows the operator to dig to depth smoothly and efficiently. 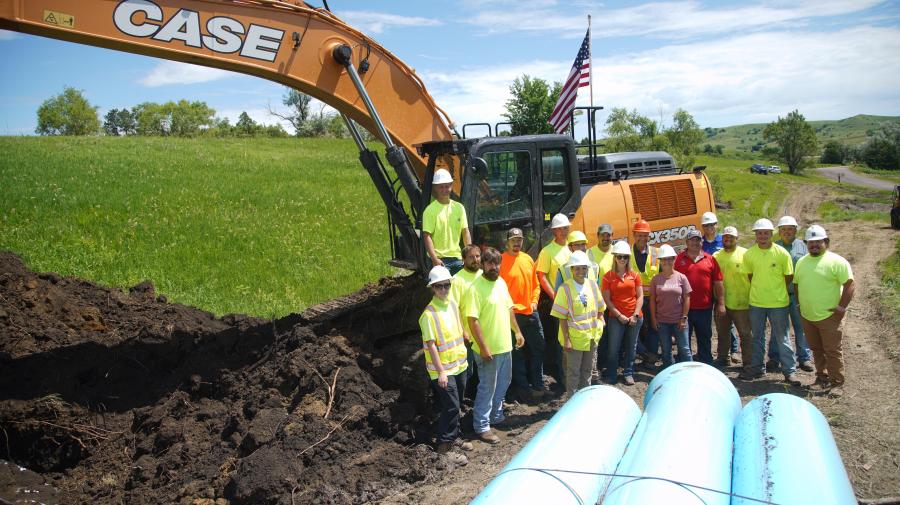 "We serve 2,800 taps — that'd be individual households, rural farms, rural pastures, cabin taps and we serve every bulk customer," Pick said. "And we also serve two rural water districts. So, in a year's time, we'll serve about a billion gallons of water to this area."

As part of the Highway 281 Bridge project initiated by the South Dakota Department of Transportation, RCWD was given the opportunity to move/replace several existing water lines. This allows the District to replace the aging 12 to 14-in. water pipes with approximately 18,000 linear ft. of new 24-in. pipe leading to and from the local water treatment plant, which will improve current service and better position the area for further growth and expansion.

RCWD has numerous employees with heavy equipment experience and others who are earning serious on-the-job-training. They decided that they would self-perform the work in order to best-utilize their expertise and stay in control of the work schedule. 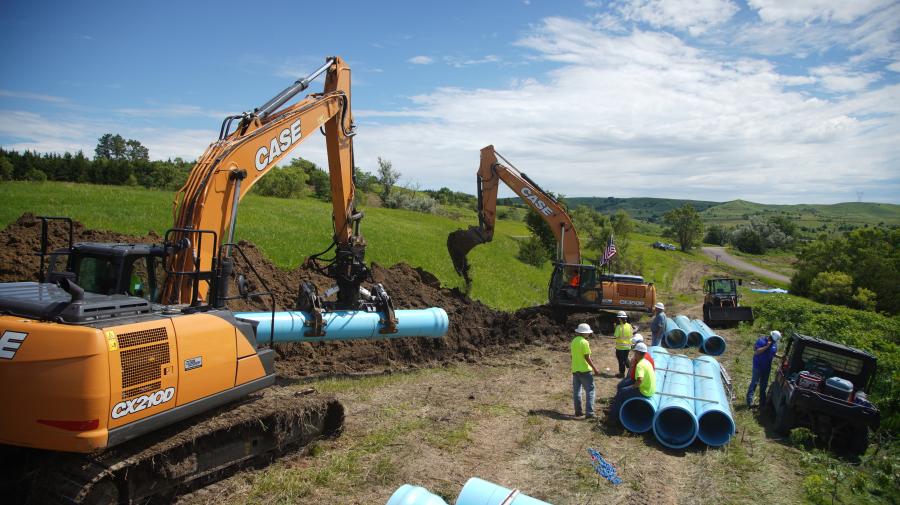 Projects of this nature often require the coordination and teamwork of multiple agencies and municipalities. Doing the work themselves has allowed them complete control over the project.

"We're probably one of the only districts around that self-perform the majority of our construction in-house," explained Dave Meyerink, co-owner of Meyerink Farm Service and president of the RCWD board of directors. "We are basically the lowest cost-per-thousand-gallon [provider] in about a three-state area. With all the expansions we're doing, we're still able to provide water to the users at a very economical rate."

RCWD worked with its long-time equipment partner Titan Machinery in Sioux Falls to help determine the ideal team of equipment for completing the project in the most efficient manner. The district owns one Case CX210D excavator and has procured additional equipment from Titan to complete the project.

Leading the charge is a Case CX350D excavator equipped with a 2D Leica Geosystems machine control system, which allows the operator to dig to depth smoothly and efficiently.

"He's going to be more efficient because he's got an indicator right in the cab that's telling him ‘hey, I'm at my depth'," explained Wade Planting of Titan Machinery. "With this waterline they're wanting 6-foot of cover at all locations, and we've coached the operator on that system so that he can bench it off of his known elevation. Every time he moves the machine he just re-benches and he keeps digging."

"It's also helping to eliminate a guy in the trench," Planting continued. "You don't have to have somebody down there with a grade rod." 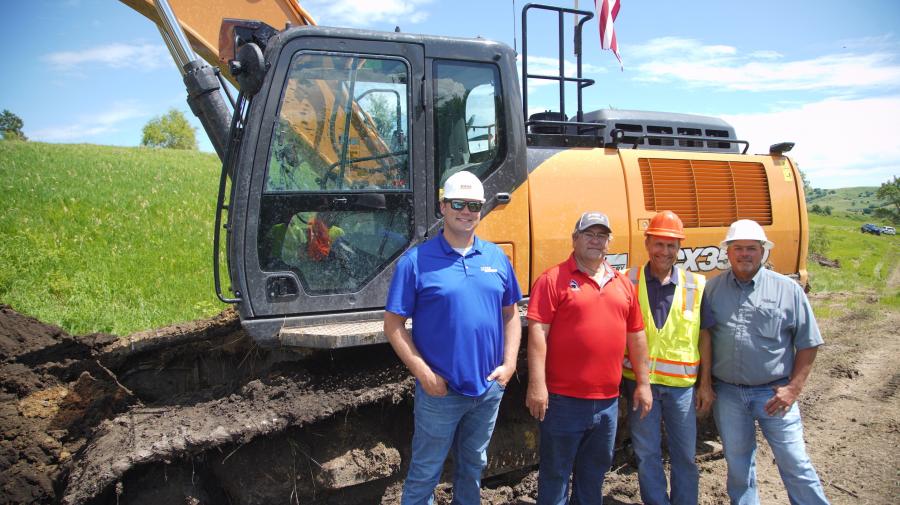 The CX350D is followed immediately by two Case CX210D excavators working the trench — one of them is equipped with a grapple for laying the 24-in. pipe, the other is equipped with a unique blade/scraper attachment that allows the operator to backfill and "feather" the dirt back into the trench (built by Meyerink's manufacturing operation). This allows the crew to move more dirt in less time, while better feathering in the dirt around the pipe as they backfill.

While the CX350D is focused on production-level excavation, the CX210Ds offer more versatility for RCWD in other tasks around the district and in the ability to transport the machine from site-to-site. At 56,909 lbs., it's big enough to be extremely productive but small enough that it can be transported without permits or access challenges.

In a supporting role, the crew is using a Case 721G wheel loader to move pipe from the trucks to the work site, as well as a 221F compact wheel loader for site cleanup. On the back-end, a Case 1150M WT (wide track) dozer follows, backfilling and grading as the last part of the process.

"That's the perfect size. Not too big, not too small," Pick said. "You go any bigger, it gets a little bit cumbersome, any smaller you don't have the power."

Using this rotation of equipment, RCWD is able to lay about 1,000 ft. of pipe per day — far exceeding the initial expectations of productivity for the project. 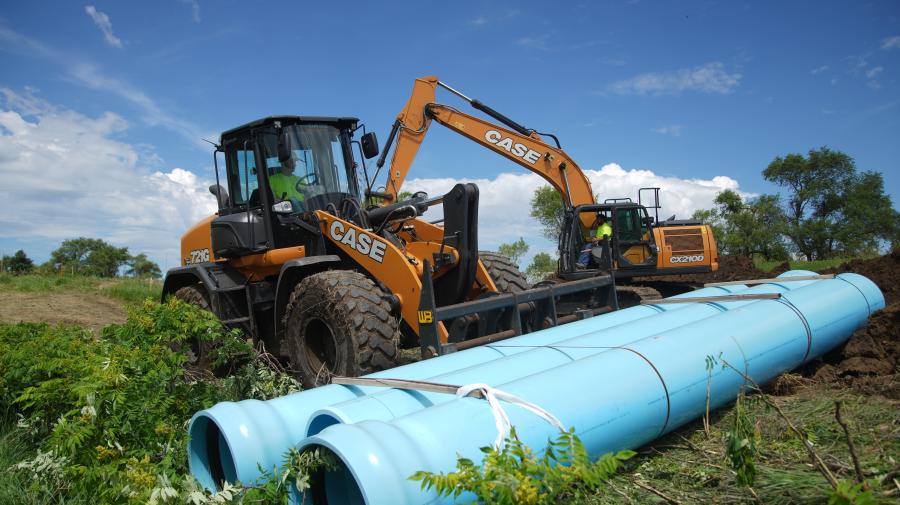 "When we did the budget, we were thinking we could average about 300 feet a day. We're surpassing that — we're averaging about almost a thousand feet a day," Pick said. "We're just getting better every day at what we do."

Much of this is made possible by the speed and efficiency of the Case D Series excavators. The system that best helps accomplish this is the Case Intelligent Hydraulic System. It makes the best use of the machine's hydraulic power and momentum, resulting in added strength, smooth operation and improved fuel efficiency.

"When you look at costs, it doesn't make a difference whether they're self-performing or contract, you still have project costs," Pick said. "Less fuel [equals] more cost savings."

The machine's hydraulics also allow the operator to experience a more productive machine without losing the precision of its controls.

"Our operators, they like how smooth they are," said Robert Durham, plant manager of RCWD. "They're not too fast, not too slow. They do a good job and have got plenty of power."

Titan Machinery's Sioux Falls location has played an important role on the job as well —monitoring all of the equipment via the Case SiteWatch telematics system and making sure that downtime is kept to a minimum.

The ability to schedule planned maintenance and other necessary service ahead of time helps keep their project running ahead of schedule.

"The other great thing that Titan Sioux Falls does for us, if a piece of equipment — any one of them here — would go down, that's going to take some repairs that are going to keep it down for several days — they're going to bring in another machine. And that, without a doubt, is wonderful."

Based on the success of this project, RCWD is already planning ahead for next year.

"We have another eight-mile project next year that the state of South Dakota is going to let us self-perform because of our resume now with this," said Pick.

He is proud of the team that RCWD has built, and looks forward to a bright future for the area.

"I think when it's all done, I would hope everybody would understand that we self-performed 18,000 feet of 24-inch line, and had a great relationship with Case and Titan to get that done," Pick said. "It's not just ‘we'—it's a team. And then most importantly, the staff that are doing it for Randall. I think it makes us unique in the water industry."

And between the experienced operators and the next generation of talent joining the team at RCWD, this rural water provider is positioning itself well for future growth and success.

"We have quality individuals that are transforming our service… into the next 40 years."