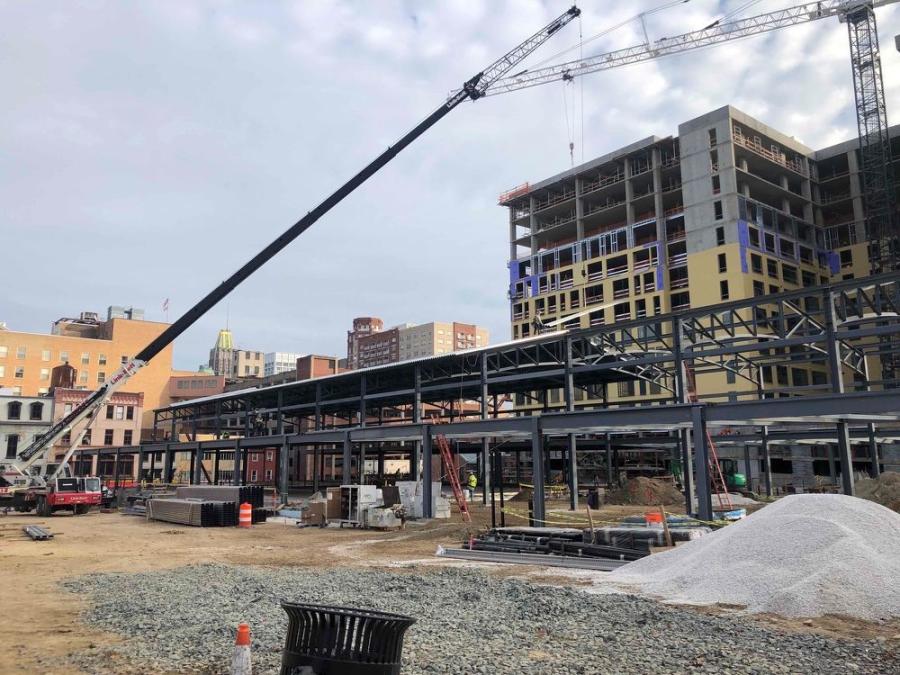 In just more than six weeks, the trusses were swung into place using a 100-ton Link-Belt HTC 86100 truck crane. Some 300 tons of structural steel were now in place.

Many city dwellers are challenged with where to buy groceries locally or where to relax under a tree and read a book. For decades, the answer to that question for residents of West Baltimore has been Lexington Market.

Despite this central location, shoppers were not pleased as the facility has declined over the years. The East Market section was built in the 1950s, with a covered Arcade added in the 1980s. Vendors selling food and wares inside also have become increasingly dissatisfied with the venue. Over the years, several attempts to rehabilitate the market have failed.

Seawall, the lead developer, formed a joint venture with Baltimore Public Markets to rebuild the market into a modern facility. Southway Builders was selected to do the construction and began working in February 2020 on the $28 million project. The Baltimore-based company plans to have the new floorspace and roof mostly complete by the end of 2021. The company will begin building the stalls for some 50 vendors by the end of the year. The completed market is slated to open in spring 2022.

"Lexington Market is for the whole city of Baltimore," said Thibault Manekin, a partner with Seawall Development, which built Baltimore's Remington food hall R. House. "It should unite us and provide a place for all of us to go."

Seawall envisions a market with a wide selection of fresh and prepared foods in a building that retains the market's early 1900s appearance.

As with most rebuilds, Southway discovered some surprises early in the game. The company began the process by relocating the vendors from the Arcade building to the East Market, which is still open. Southway's planning considered the tight spaces of working in a dense urban environment, surrounded by busy streets.

"As we began the demolition, we encountered a limited amount of asbestos, which was not surprising considering the age of the structures," said Eric Stephenson, project manager of Southway. "We also had to be careful since the structure being demolished was tied to a part of the market that remained open."

The real fun began when the workers started excavating for the new market's foundations. In the early 1900s, the site had been a department store, which was demolished, and the site was used as a parking lot prior to this project.

"We found about 10 feet of broken bricks and rubble underneath," Stephenson said. "Rubble is not suitable for a foundation. It would have cost $1 million to excavate all that material and haul it to a landfill."

A joint effort between Southway and the geotechnical engineers brought to the site a Kleemann MC-100. This track-mounted jaw crusher began chewing through the rubble on site and created material that could be used to support the foundation. The crushing activity added three months to the schedule but saved some $600,000 in cost. The construction team processed about 4,500 cu. yds. of material during that time.

The next obstacle was the site's proximity to a subway tunnel for the Baltimore Metro. The construction team cantilevered 50 ft. of the building on caissons and grade beams so as not to rest on the decades-old subway tunnel. Workers drilled holes 60 to 90 ft. deep for the caissons to build the foundation upon.

Although the subway tunnel proved challenging, its existence and the Baltimore Metro stop should be a boon to the economic health of the market. The Metro stop will allow shoppers easy transportation to the facility from other areas and avoid the busy street traffic.

Because the construction was so close to the subway system, Southway was required to carry Railroad Protective Liability Insurance. 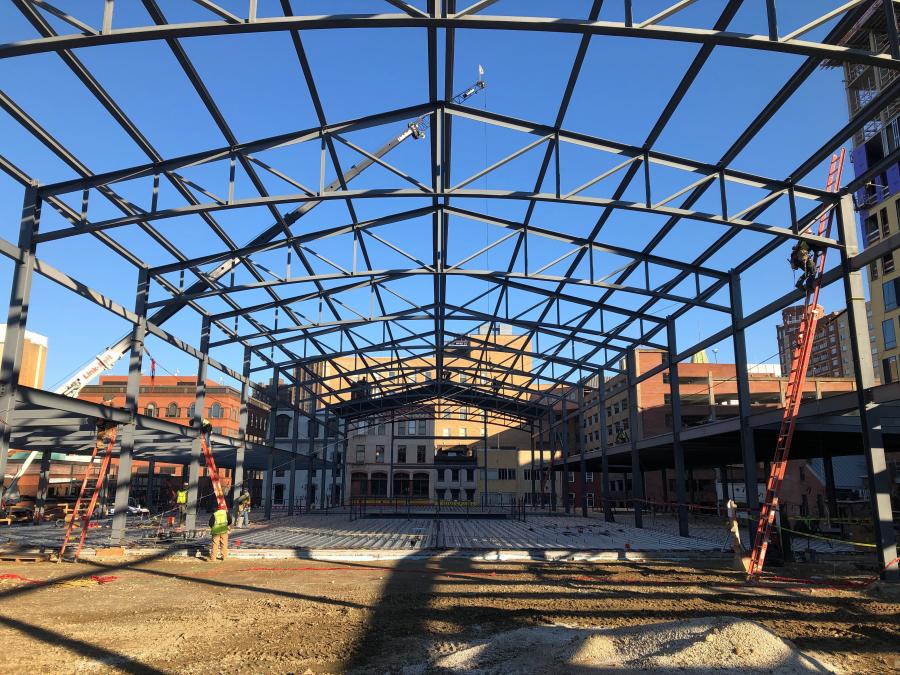 The shed-like building required a concrete slab and a roof span achieved with 14 exposed steel trusses.

"The trusses were each 61 feet long and so large they could barely fit on a tractor-trailer," said Stephenson.

Because of the nearness to other structures, there was limited laydown room for the trusses.

Passersby and residents probably thought nothing was happening after months of crushing and grading the area. That all changed as the trusses started arriving. In just more than six weeks, the trusses were swung into place using a 100-ton Link-Belt HTC 86100 truck crane. Some 300 tons of structural steel were now in place.

Because of tight spaces, Southway needed to cooperate with other construction projects in the area.

"A new apartment building and hotel are being built in the same area," said Stephenson. "We even shared an alley with this project, which was being run by a competitor. We worked well together, which was important since each of us had deliveries that were arriving at varying times."

Once the trusses were in place, the construction team moved into the roofing phase. The roof is standing seam aluminum. Workers installed Thermax exterior sheathing for the walls.

The exterior of the market also will have distinctive elements. Much of the façade will be brick in keeping with the exterior look of other buildings nearby. One distinctive look will be architectural concrete tiles that will be part of the finish. These custom-made elements consist of 8-in. by 48-in. by 3/4-in. concrete planks.

"These planks will have great visual appeal," said Stephenson. "The designers saw this as a means to combine the history of the site with more modern elements like glass and architectural concrete."

As with most construction projects built during this time, contractors had to tread carefully because of COVID-19. 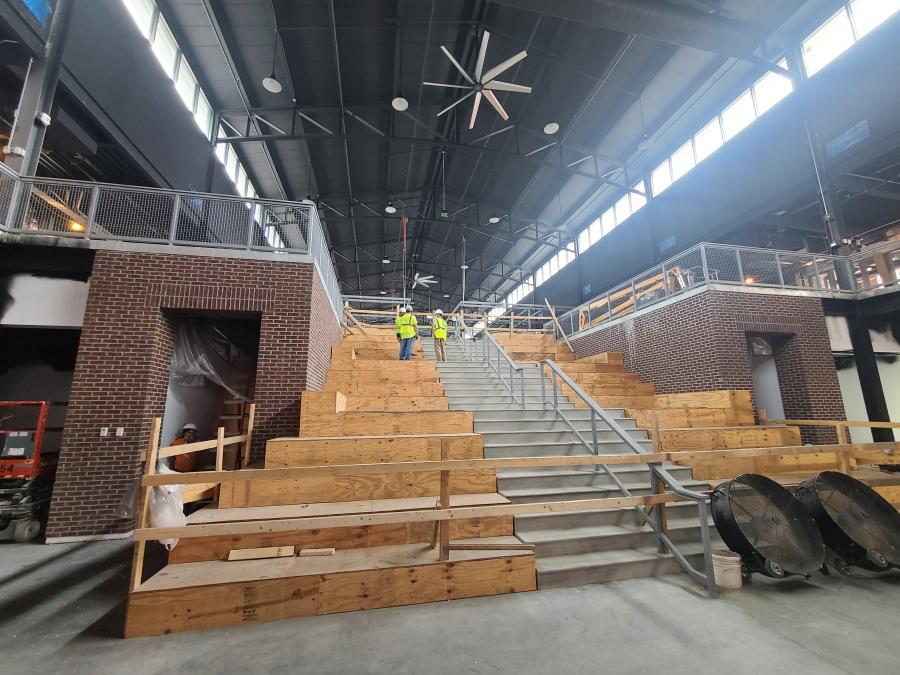 "We have had 656 workers on this project, and we used Procore Construction Management System to keep track of everyone," said Stephenson. "Workers could check-in digitally, sign waivers and could limit personal interactions. Our people could observe the COVID protocols, and we were able to avoid any outbreaks or work stoppages."

Stormwater management for the two-acre site was another key issue. Planners designed the site to handle up to one acre of rainfall during a storm event.

"We called it a modular wetland system," said Stephenson. "Instead of using a traditional irrigation system to water our trees and flowers, we built storage to save the rain for our irrigation needs. Excess water is then slowly discharged into the city drainage."

BCT Architects, a Baltimore company, was the architect for the project. The design elements of the project have it on the road for a silver LEED certification. This recognition tracks green building processes. Southway must comply with other requirements, including recycling, to complete a successful certification.

"It has been incredibly fulfilling to work on this project," said Stephenson. "I'm a Baltimore resident myself and I see the impact this job will make on my neighborhood and on the city.

"It's important that the new market can serve all types of people," he added. "The market will have all kinds of items from inexpensive groceries up to and including gourmet crab cakes. This new market will serve people of all ages and backgrounds. I believe it will be a public space for all people to come and to enjoy." CEG