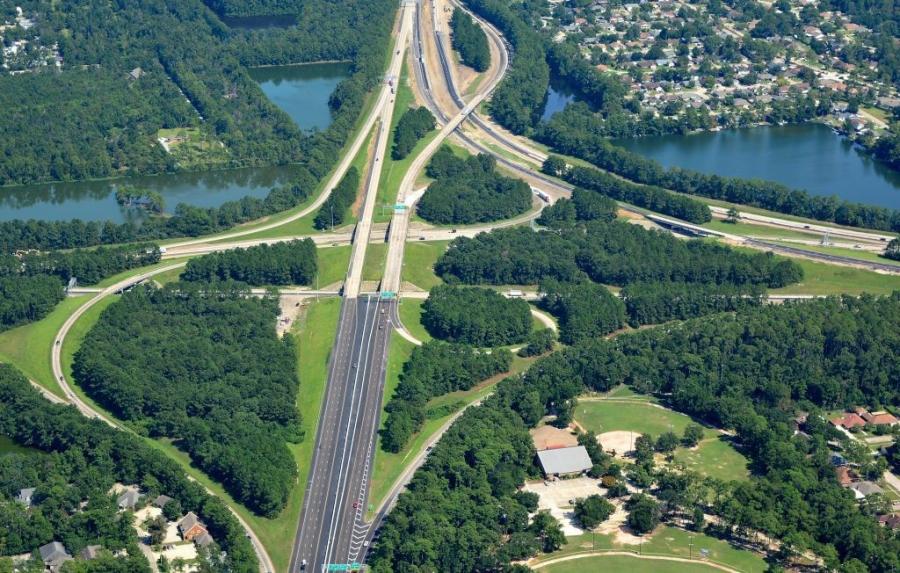 For years, the confluence of I-10, I-12 and I-59, the French Branch Bridge and West Pearl River Bridge has enabled drivers to get where they needed to go in the New Orleans metro area. Motorists and residents alike were wary about the announcement of extensive reconstruction coming on these essential roads.

Most viewed it as a "good news, bad news" situation. The crumbling roadways was in dire need of repairs, but the three highways and six on ramps, known as the French Branch Project, would probably take a long time to fix.

Many locals — including construction industry experts — were shocked that the winning bid from Barriere Construction committed it to complete the massive project in less than one year. The next two lowest bids were commitments of 675 and 699 days respectively.

How could one firm complete a job in nearly half the time of its competitors? Barriere chose an asphalt alternative for the reconstruction. The asphalt bid, though slightly higher in construction costs, had user delay costs of $5.4 million ($15,000 per day), nearly half the cost of the other bids. The final bid of $45.3 million beat the nearest competitor by $2.3 million.

"When we first submitted our bid to the state, others challenged it and didn't think it was possible," said Ricky Quigley, Barriere's general superintendent on the French Branch project. "But we brought together a lot of resources, including the right equipment to work with and the people to make the project happen. We had multiple teams working the job and they put in a lot of hours to bring it in on time." 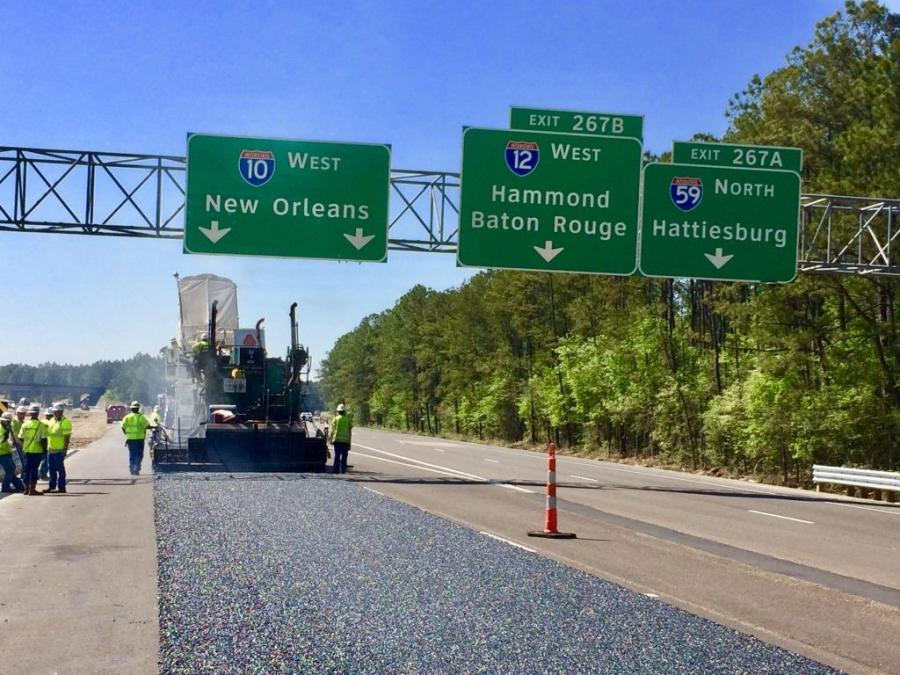 Barriere's construction team benefitted from having two asphalt plants in the area. This enabled it to keep a constant flow of material to the workers. Barriere also hired a quality control manager to ensure the road met the Louisiana Department of Transportation and Development (LADOTD) specifications and enabled the team to constantly communicate with the owner and owner's agent.

The LADOTD designed both asphalt and concrete versions of the French Branch rebuild. The asphalt version selected by Barriere required a 5-in. base course over the existing subgrade with a 10-in. Superpave binder course and a 2-inch Superpave wearing course. The road was topped by 0.75-in. open-graded friction course (OGFC), which helps to drain rain off the roadway and gives motorists increased stopping power when needed. In all, the paving teams installed 230,000 sq. yds. of asphalt base course, 176,000 tons of Superpave, and 6,000 tons of OGFC.

A key requirement of the job called for the removal of the old concrete roadway before paving could begin. The construction team used excavator breakers and impact breakers to shatter the concrete into pieces small enough to be hauled away. In all, the Barriere team removed 93,800 tons of concrete.

Of course, the excavation was not without obstacles.

"Some of the more challenging subgrade was where I-10 passes over I-59," said Quigley. "The soil was so soft there that we had to excavate it 6 feet deep to find solid ground. We still got it done in time to open up for traffic Monday morning."

A vital component of the project's success was due to its skillful equipment management.

"Over the last 15 years, Barriere has partnered with Caterpillar on our projects," said Tucker. "Probably 90 percent of our equipment is Cat, including our excavators, pavers and rollers. On a complicated job like the French Branch project, we needed to have absolute reliability for our equipment. Their partnership was crucial in getting the job done on time."

To adhere to its rigorous schedule, Barriere maintained a strong "bench" during the job.

"We had back-up crews in case someone had a family emergency or couldn't complete the shift," said Quigley. "Our schedule wouldn't allow us to drop behind. At the same time, our teams developed a great rhythm during their shifts and were extremely productive." 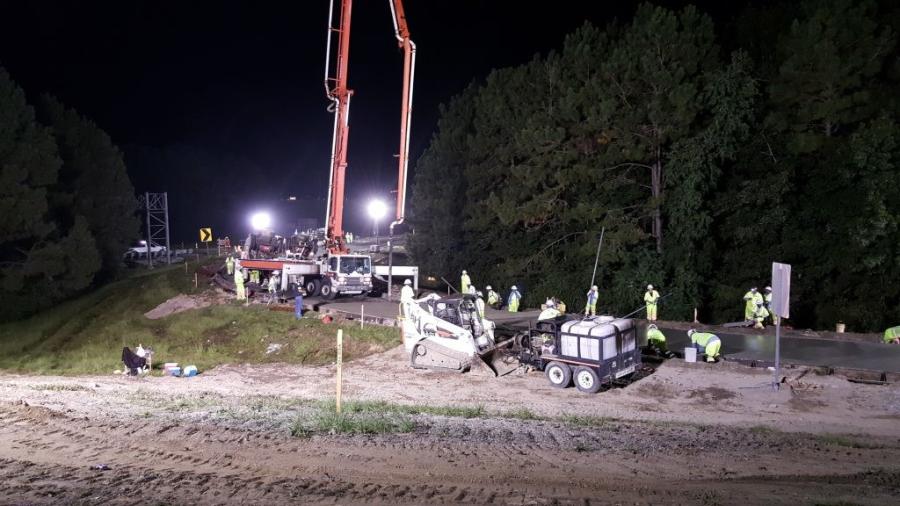 When a lane opened for work the team had to operate at peak proficiency. Quigley described the handoffs from one team to another.

"The lanes were turned over to us at 8 p.m. on a Friday night, so we would start demolition and then bring in a second crew about 1.5 hours later. The removal was scheduled from Friday night into Saturday morning. Then, we would bring in the milling machine to remove the soil-cement and help create a strong subgrade. The first paving crew would start around midnight and work for about 10 hours before the next paving crew would take over for their shift. Then, the lanes would be opened up for traffic on Monday morning at 5 a.m."

"We studied the weather maps carefully before turning our crews loose on the job," said Quigley.

Because of the French Branch Projects' proximity to the Gulf of Mexico and the possibility of severe storms, the construction team was required to be ready to reopen the road within 48 hours' notice.

Barriere faced numerous obstacles and restrictions if it were to complete its ambitious reconstruction plan. Detouring traffic would enable workers more space and time for the rebuild. However, because of high traffic volume and lack of frontage roads, this was impossible. Barriere approached this problem by narrowing traffic to one lane during night paving operations.

Quigley recalled some of the difficulties of working in laterally confined spaces.

"Sometimes we had a narrow stretch of about 1,800 linear feet to work in, then we would have to switch and work about the same length in another lane."

Because of the tight spaces, workers were not always able to work behind concrete barriers that provided maximum protection.

"We had cones to alert the drivers of our presence," said Quigley. "And we had electronic warning systems to tell us if any vehicle crossed into the work zone."

By rehabbing the shoulders along the I-10 section, traffic could be safely redirected to make way for paving crews — at times, three simultaneously.

"This strategy enabled us to spend more time working on the main lanes," said Quigley. "After the work was complete, we milled the rehabbed shoulders and saved the paving material to use on other parts of the project or for future jobs."

With the job fully complete in 2016, Quigley now drives the French Branch project and reflects. "Our people invested a lot of time and effort in it. They performed admirably. This was a once-in-a-lifetime project." CEG