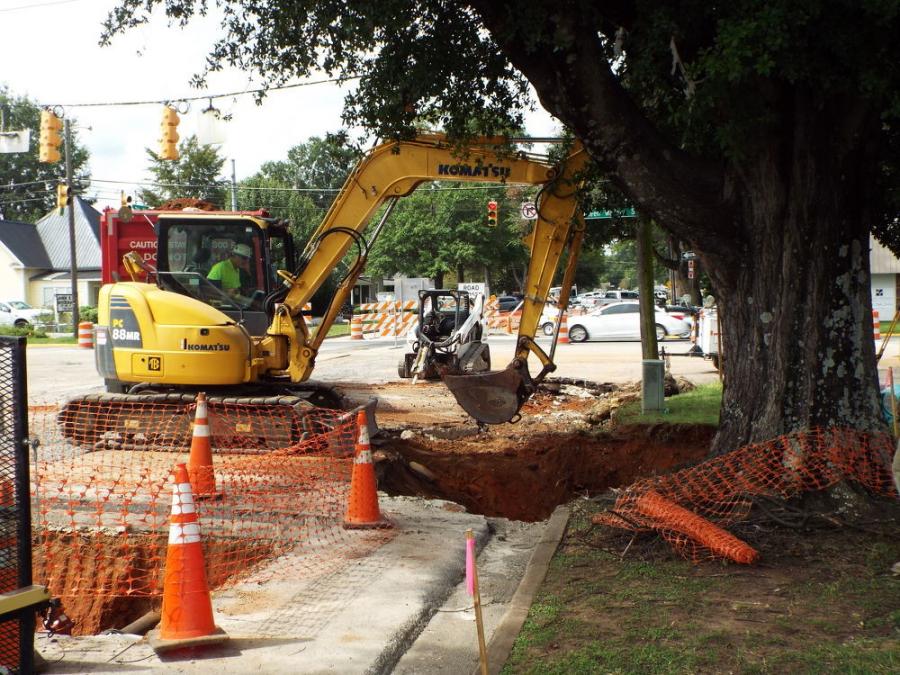 The Alabama Asphalt Pavement Association named the project the winner of the 2020 Quality Pavement Award for the Reconstruction Category.

Save for completing the shared used path underneath the Hugh Thomas Bridge, where some handrail has to be installed, sodding and irrigation and other various landscaping items, ST Bunn Construction Co. Inc. has substantially completed the Alabama Department of Transportation's (ALDOT) $24 million Lurleen Wallace Boulevard project in the heart of downtown Tuscaloosa.

The project, financed by ALDOT and the city of Tuscaloosa, reconstructed 0.8 mi. of the main downtown thoroughfare from near the Hugh Thomas Bridge to near I-359 to improve traffic flow and pedestrian safety. The initiative began in late July 2018 and by last July had rebuilt this section of the north-south road — widening it from three lanes in each direction to five, which includes three travel lanes and left and right turning lanes. The road has since been re-opened to traffic.

The work also saw the relocation and reconstruction of aging underground infrastructure — water and sewer lines, storm water lines and storm boxes; the removal of parking spots on Lurleen Wallace Boulevard and placing them on adjacent side streets; and sidewalk extensions to the Tuscaloosa Amphitheater, along with additional landscaping.

"Moving the parallel parking spots to side streets has increased the effective capacity of the roadway and the sidewalk extensions enhance pedestrian safety," said John McWilliams, ALDOT's public information officer, West Central Region. "With more than 72,000 motorists using this corridor daily — an increase of approximately 12,000 since 2013 — it was vital that Lurleen Wallace Boulevard received an upgrade. The biggest element was the underground utility relocation — everything underground had to be redone. This was a very deep and expansive project and they found some old trolley tracks." 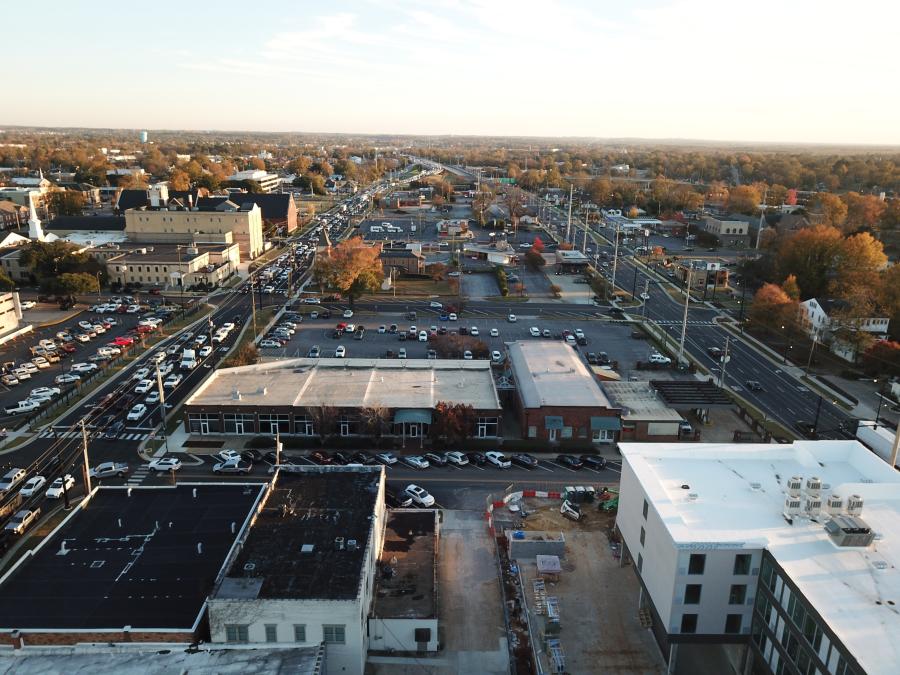 The Alabama Asphalt Pavement Association named the project the winner of the 2020 Quality Pavement Award for the Reconstruction Category.

"It's our largest vehicle corridor in our entire region," said McWilliams, who pointed out that along the road are various businesses, one apartment complex and two hotels.

The operations began on the south side of Lurleen Wallace, with traffic switched to the other side to give the crews space to safely work.

"We allowed them to work on both sides at the same time," McWilliams said. "When we had to resurface the side streets, it was a closure here and opening here type of thing."

Conducting road work in the heart of the city is never easy at the best of times.

"We utilized the project website, which provided a map that was updated to show what was opened and closed side street-wise, an FAQ section, images to show what was going on, and the latest updates," said McWilliams. "We also used Twitter to post updates and radio advertisements. We did as much as we could to reach out and inform the public. We always allowed an entrance and exit for businesses, hotels, and apartment complexes."

Key to the project was dealing with all the elements simultaneously, which is where cooperation with the city was crucial.

"This was an absolutely needed project," said McWilliams. "Any time you can add lanes and make a road safer, all the better. When people drive on the boulevard now, I know they appreciated what it took to get there."

The infrastructure and road upgrade was designed by Walker and Associates.

"A big safety issue was removing parallel parking," said McWilliams. "With the speeds of vehicles coming off of I-359, it made it where you didn't feel comfortable parking on Lurleen Wallace. It will be decades before we have to get underneath the road — this is a project that will last a long time."

For the most part, construction crews worked via day shifts. The underground infrastructure operations made it an intricate project and accounted for the two-year-plus length of the project. Save for the installation of guardrail at the Hugh Thomas Bridge, it was a road project.

"It was behind schedule because we had a significant amount of rainfall that really slowed down progress," said McWilliams. "From last January to August we accumulated 65 inches of rain in Tuscaloosa — we normally average 53 inches of rainfall for the entire year. We were at the mercy of Mother Nature."

ST Bunn and ALDOT officials have been working well together, holding bi-weekly meetings from the start to coordinate the work, resolve issues that arose, and come up with alternative plans.

The wet conditions were far from ideal for excavation and road reconstruction, making it difficult to bring in heavy equipment and move wet and hard soil and old pipes and other concrete infrastructure.

As explained, the work began on the south side of the boulevard.

"The project was entirely open, and it was essentially 16 city blocks — eight southbound and eight northbound," said Benji Cantrell, an ALDOT engineer overseeing the project. "In general, crews had to go between three to six feet deep to remove the old infrastructure, but had to go as deep as 12 to 14 feet in locations near the south end of the project (12th Street). GPS didn't help as much as we thought it would for this project. Unfortunately, it's still not accurate enough when used adjacent to tall buildings and tree canopy to accommodate some of the very tight grades we were working with, either with minimal slopes or ADA grades for sidewalk improvements.

The next step was to remove the old infrastructure and place new underground elements.

"Box culverts were not installed, but new storm boxes were," said Cantrell. "This varied greatly depending on the type, depth, location, number of pipes and number of boxes per intersection. It took roughly six to eight weeks on average per intersection for storm work.

Thorough planning helped with the turning off of utilities as they were removed and replaced.

"Utilities took heavy coordination during design and construction to make sure that new installations could be performed with as minimal downtime as possible," said Cantrell.

Critical pieces of equipment for the earth work and excavation operations included medium and small-sized excavators, such as Komatsu PC88MRs; Komatsu WA270 wheel loaders; and loaders. The excavator operators had to be very precise when working around trees — many of them decades old — that had to be protected during the construction.

With the new infrastructure in place, the road crews arrived and rebuilt the new lanes.

"The project was a little bit like a jigsaw puzzle," said Sonny Bunn, co-owner and president of ST Bunn. "You couldn't just go in and work everywhere to do it quickly. The demolition had be done before the guys could start the storm and sanitary sewer, and only after that could we start shaping the dirt and the curb and gutter could be poured. It was a step-by-step process before the asphalt could be put down,

"They would only give us about two block sections at a time on one side of the road," he added. "We didn't have much room for everybody to work. One crew had to finish before the next one could go in. We did the west side of the southbound lane first — completing it from one end to the other and then swap over to the east end of the section. We couldn't block more than two cross streets at a time. The traffic control plan dictated what we could and we couldn't block the whole road at once — the businesses were hurting as it was."

Mini-excavators were used in tight spots between the power line poles, businesses and sidewalks. 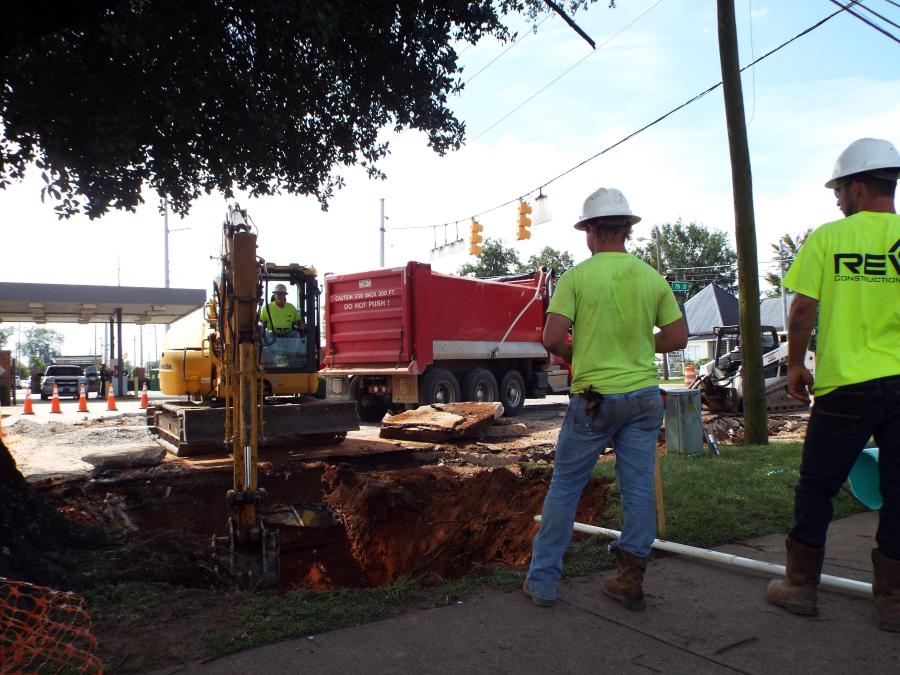 The wet conditions impacted the road construction and a soil cement subgrade had to be sprayed, which was not included in the original bid that was submitted.

‘We got some specialized equipment out of Knoxville, Tennessee from Pozzolanic Contracting & Supply Co. Inc. to spray the cement to keep it from splashing onto buildings and cars," said Bunn, ‘They were scarce and we mounted them on Mack all-wheel drive trucks. This kept the cement dust at a minimum."

As the road was being rebuilt, crews not only found trolley tracks, but railroad tracks in some places.

K-rail was used during the new lane construction to protect the crews.

Project Lead Manager Judd Jones and Superintendent Joel Beard oversaw the various phases of the work from the start.

"The cooperation I got from the city and ALDOT was the best I ever had," said Bunn. "We broke some water lines along the way and the city immediately came in to repair before they flooded everything. We had four different asphalt crews that worked on the job. Whenever we had a section ready to go, I pulled a crew from the closest nearby project to get it done.

"The concrete barrier gave a us a feeling of safety and it was absolutely necessary," he added. "The crews worked hard. I told them ‘this was a one in a lifetime opportunity to build something to tell your family and to build it with pride.'"

"Pre-design survey is difficult to get every tie-in, every item in the built environment really pinned down for what is proposed," said Cantrell, "Maybe that will improve with the use of LiDar. Also, additional surveying, between 90 and 100 percent, to check tie-in locations and look at new proposed infrastructure locations to minimize conflicts. We can also try to allow as much closure as possible for construction as working under traffic [throughout] the entire project created massive coordination issues.

‘If allowable, we would like to try GPR techniques to locate existing utilities along proposed gravity infrastructure," he added. "Cement treatment of the subsurface became very important for this project, and maybe more subsurface exploration for preconstruction could take place. Getting utility companies involved on the project and being part of the project team —design/construction — as soon as possible would help, as would keep them informed often."

"Everything was normal wear and tear," said Bunn. "My central shop was only two miles away from the job site and mechanics could be called if we needed help."

"Our dealerships are all straight-up, very reliable and very truthful," said Bunn. "I'm 72 and have enjoyed a long working relationship with all their people. I have great respect for them and we're honest and straight up with each other." CEG