The state already is looking at expanding its Skilled Trades Training Program beyond the $30 million it's already spent, while also considering ways to boost career tech education in Michigan' 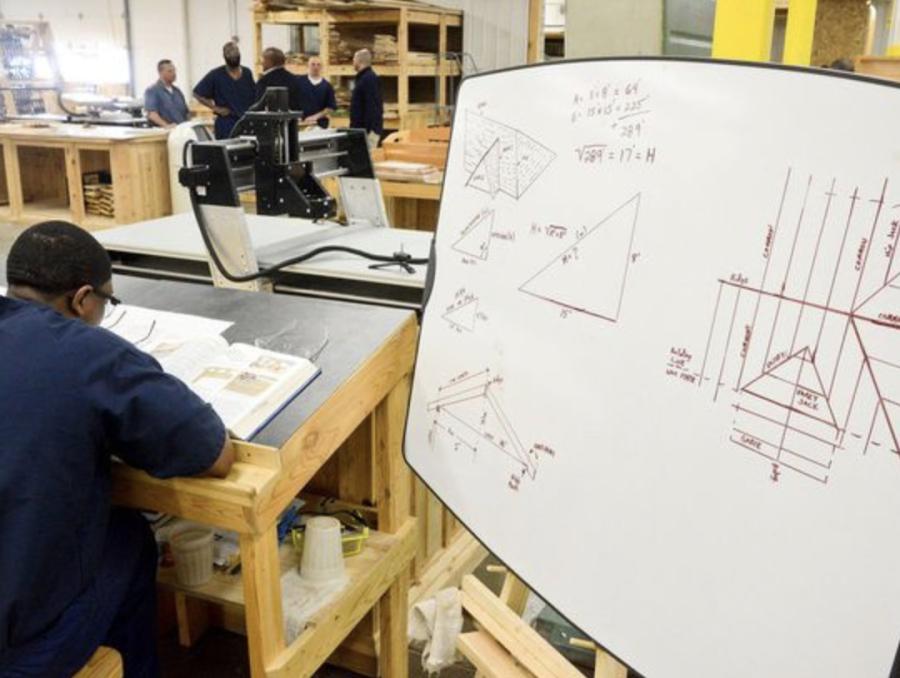 Through the Vocation Village program an inmate can complete a an apprenticeship in one of five programs including Electrician, construction craft laborer, carpenter, roofer and pipe fitter. (Emily Rose Bennett | MLive.com)

Career paths in Michigan should more frequently involve skilled trades apprentice training, according to a recent report that details the benefits of the programs.

That form of formalized on-the-job training for specific jobs - like electrician, plumber, carpenter and steelworker - comes at a low-cost for the participant, and fuels the state's economic drivers that use construction trades.

The state already is looking at expanding its Skilled Trades Training Program beyond the $30 million it's already spent, while also considering ways to boost career tech education in Michigan's middle and high schools.

The reason: It's critical for Michigan's economic development to fill its nearly 100,000 open jobs and train for the retirements coming in the next 10 years.

"The prospects for people to get into the middle class is one of the big issues of our time," said Ken Sikkema, a partner in Public Sector Consultants, which released the study on Michigan apprenticeship programs.

He added: "The apprenticeships are pathways to good-paying jobs and a middle-class lifestyle."

According to the PSC study:

Michigan averages about 2,000 apprentices per year since 2000.

The largest wage growth from beginning to end of apprenticeship programs, which can take up to six years, were for Electricians ($21.30 per hour at completion); pipe-fitter ($21.21) and carpenter ($19.73).

About 80 percent of apprentices are affiliated with unions. And both women and non-whites are underrepresented: they make up 3 and 11 percent of all apprentices, respectively.

With enough skilled trades in the commercial construction industry, "nothing gets built," said Pat Devlin, secretary-treasurer of the Michigan Building Trades Council, one of the sponsors of the study. Other sponsors were Michigan's International Brotherhood of Electrical Workers and the National Electrical Contractors Association.

While the building trades hope the results of the study can help spur more applicants into the trades, it's an issue for manufacturing, too. The Center for Automotive Research just released a report detailing the shortage in the tooling apprenticeship programs.

"The current shortage of skilled trades workers is affecting our nation's ability to compete and grow," wrote Jack Martin in a recent article on training.

The reasons for the shortages across the board are similar: The existing workforce is aging, with pending retirements creating concern over future ability to staff necessary openings. And the previous decade - when the Great Recession slowed both manufacturing and construction in Michigan - constricted the pipeline of hires and prompted some experienced workers to leave the state.

Even the state of Michigan's prison system is getting into workforce training by running Vocational Village in an Ionia correctional center.

Demand for building trades will be strong for coming years, Devlin said.

"In the next two years, based on our 12- county area, we have over 105 million construction/craft hours estimated," Devlin said. Those hours do not include the pending Gordie Howe International Bridge, DTE Energy work and residential construction.

Another reason more people don't pursue the trades is focus on four-year degrees among high school teachers and parents, as many students set their sights on white-collar jobs and wages.

"Everyone is pushed toward college," he said. "Kids aren't prepped that there is an alternative out there."

What makes a viable apprentice candidate?

Access to transportation, some math skills - likely through a second year of high-school math, including geometry, and acceptable reading skills, Devlin said. Candidates also will face drug- and alcohol-testing.

It's also good for potential apprentices to have a realistic view of the work, which may be done outdoors and in any kind of weather. And no fear of heights helps, too, Devlin added.

Another necessary skill: "Showing up to work," Devlin said. That is among what he called the soft skills that some recent graduates still need to learn.

The report from PSC is not disparaging other education venues," Sikkema said. "It puts the benefits of these programs in context."

One of the benefits is cost, the report outlines, compared to two-and four-year degrees. The programs provide skills training that Gov. Rick Snyder and other officials identify as critical for the newest generation in the workforce.

For the public, that means no public funds cover the job training. And for the apprentice, there are no tuition fees - paired with earning while they're learning the skill.

"There are easier ways to make a living than building trades, but ... you can make a great life doing this work," Devlin said.