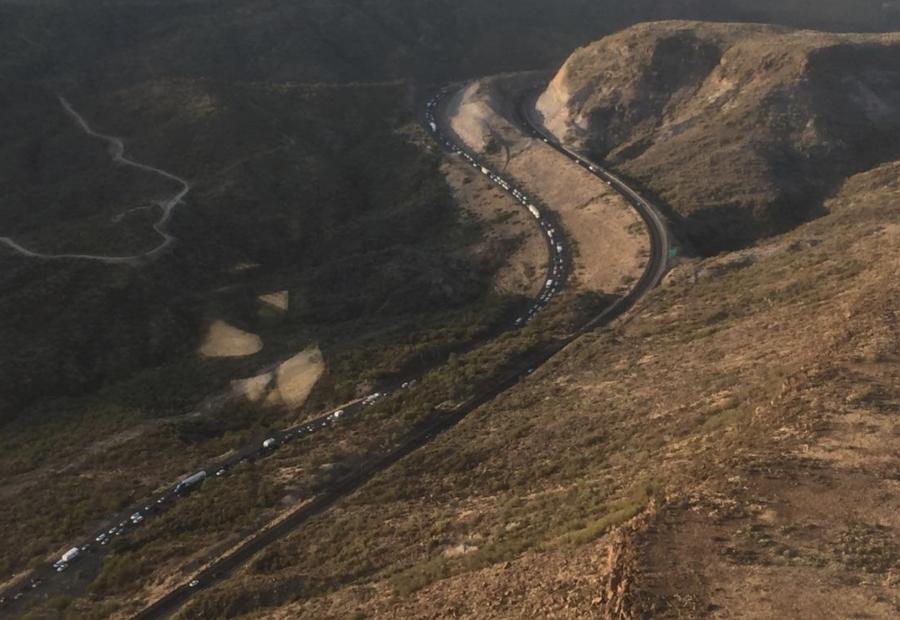 The I-17 flex lanes will operate as a separate two-lane roadway carrying one direction of traffic at a time depending on the greatest need along the steep 8 mi. between Black Canyon City and Sunset Point.

With planned Interstate 17 flex lanes between Black Canyon City and Sunset Point set for construction starting by 2021, the state budget provides the additional funding needed to also complete widening I-17 south of where the flex system will be built.

This $130 million investment to complete new third lanes in both directions of I-17 between Anthem and Black Canyon City is one of many in the budget that will expand and preserve transportation infrastructure across Arizona. Appropriations from the State General Fund include $10 million for an ADOT study on adding lanes to Interstate 10 between Phoenix and Tucson and $10.5 million for preserving state highways to extend the life of existing pavement.

In addition to baseline funding for transportation and infrastructure, the budget includes more than $95 million in appropriations from the State General Fund for targeted transportation projects that will improve safety and spur economic development in Greater Arizona. This includes $28 million for expanding U.S. 95 between Yuma and Yuma Proving Ground, that region's largest employer. There is $20 million to help build two Interstate 40 interchanges needed to accommodate growth in Kingman, with the city providing the remainder of the funding required.

ADOT has been working to advance projects to improve traffic flow and safety along 23 mi. of I-17 between Anthem and Sunset Point north of Phoenix. More than $190 million was already committed to building flex lanes north of Black Canyon City as well as adding 7 mi. of a third southbound lane directly south of that project.

Investing an additional $130 million over three years will allow ADOT to complete all sections of new third lanes. Combined with the flex lanes, this increased capacity will enhance safety and help address traffic flow challenges and backups that occur due to crashes and when many drivers are traveling to or from Arizona's high country on summer weekends.

The Maricopa Association of Governments is providing $50 million in regional funds to help fund the widening of I-17 between Black Canyon City and Anthem.

The I-17 flex lanes will operate as a separate two-lane roadway carrying one direction of traffic at a time depending on the greatest need along the steep 8 mi. between Black Canyon City and Sunset Point. With gates at each end and separated by concrete barrier from the current southbound lanes, the flex lanes will be able to carry heavier northbound traffic on a Friday or southbound traffic on a Sunday. They also can keep traffic moving if there is a closure in that stretch.

Required environmental studies for the I-17 corridor are scheduled to be completed by this summer, with the projects scheduled for completion by 2023.

The budget commits $10 million from the State General Fund to an ADOT study, in collaboration with the Maricopa Association of Governments and Gila River Indian Community, on adding a lane in each direction and improving interchanges on I-10 between Phoenix and Casa Grande. Completing a design concept report and environmental study will determine needs and costs, and establish how the improvements will be phased. This process is on track to begin this year with an accelerated 18-month timeline.

The $51.1 million in funds, including $10.5 million in additional funding from the State General Fund, will allow ADOT to preserve the road surface along more miles of state highway through treatments known as fog seals and chip seals. These investments are critical to extend the life of existing pavement by sealing road surfaces against the ravages of weather, heavy use and time.

The budget's other transportation infrastructure investments from the State General Fund include: