After five years of planning and fundraising, crews broke ground on June 14 in Salem for the Oregon State Police Fallen Troopers Memorial. 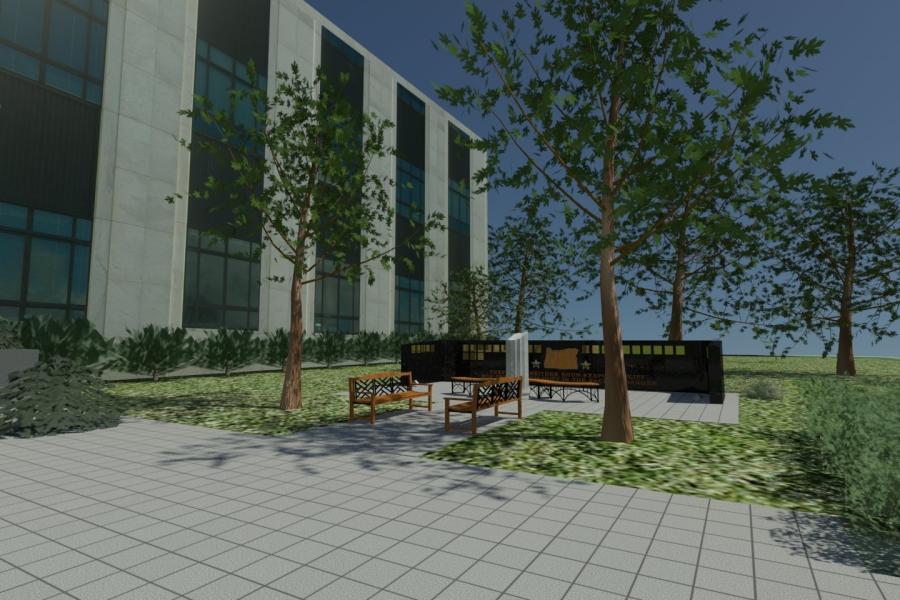 “This is the most in-the-line-of-duty deaths of any law enforcement agency in the state of Oregon,” said OSP Lt. Cari Boyd, president of the committee charged with raising the $235,000 to fund the memorial.

The memorial was inspired by the loss of the life of Senior Trooper William Hakim, who was killed in 2008 in a bomb explosion, Boyd said. At the time of his death, there was a plaque outside the OSP headquarters honoring fallen troopers, but Hakim's name could not be placed on the plaque because there was no room.

“At the time, superintendent Tim McLain thought this was a huge injustice that Senior Trooper Bill Hakim could not be brought home,” Boyd told the gathering at the Flag Day groundbreaking. “He thought of the vision of having the foundation, and building this memorial to honor our fallen troopers. This memorial will show the dedication and honor our fallen troopers that have paid the ultimate sacrifice. Millions of people will get to see it every year as they come and visit the capital.”

“We are so proud to be a part of this,” said Gene Bolante, lead architect at Studio 3 Architecture, designers of the memorial.

“I'm not aware of anything that is similar to this,” Wellert said. “Typically with a memorial for this type, you'd get just black granite from China, shaped and polished, and delivered to the U.S. This was mined out of the ground locally. The stone — huge basalt boulders — came from Madras, and were hand-sculpted to what it is today by Portland sculptor Jason Jones of Jones Sculpture Studio.”

“I think the biggest part of this is they got permission to put this on the Capital mall,” he said. “That's really important that it is going right there outside of the Public Service Building where the officers were sworn in. That's roughly 50 feet from where this is going. We're really excited. It just means so much. From the citizens side, the officers don't get told enough how much we citizens appreciate what they do every day, and those who have paid the ultimate price. It's great to be part of a way to acknowledge that and thank them for their service.”

The memorial is set to be complete in the fall of 2016.

“The fallen trooper board has just exhausted efforts in raising the money,” said Wellert. “It's been really great working side by side with state police and seeing it from infancy. It's just been great. Everybody has been phenomenal.”