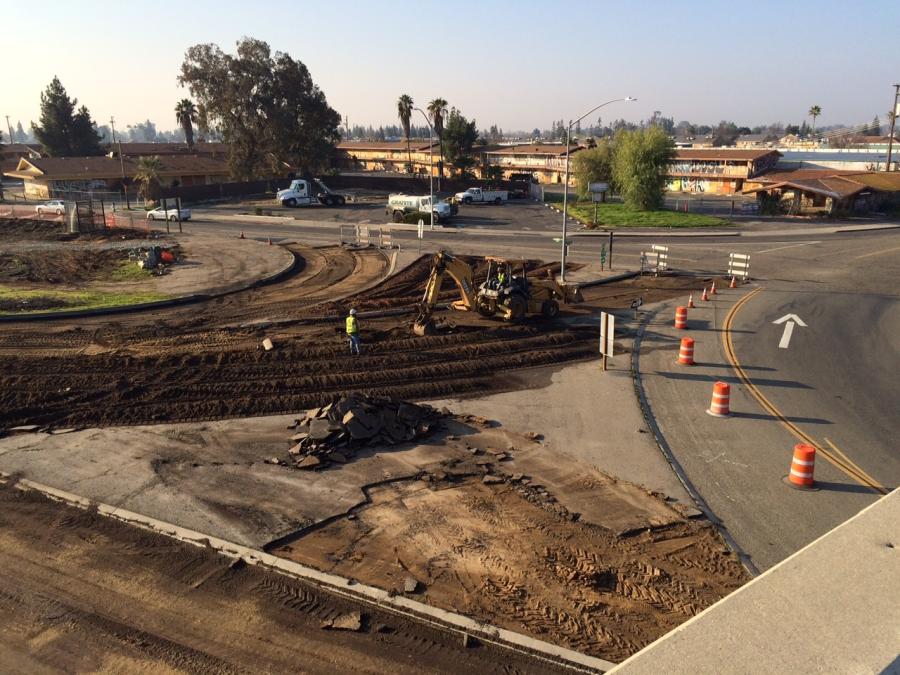 High-speed rail and tracks and trains are planned to ultimately connect San Francisco with Los Angeles and Anaheim. When finished, the high-speed line will run up and down California's Central Valley.

Work on the project began in fall 2015. Utility relocation is under way and will continue through winter of 2017.

Currently workers are installing roadway drainage systems and underground utilities between Clinton and Olive avenues south of existing State Route 99. They also are constructing an auxiliary lane on southbound SR 99 from Clinton to Olive avenues.

Work to widen the Ashlan southbound off-ramp will begin before the end of this year. Construction on the Clinton Avenue interchange will begin in May of this year, once a contract for the main project package has been awarded, and is scheduled to conclude in June 2018.

Granite Construction, based in Watsonville, Calif., serves as contract manager and general contractor of what is referred to as the project's early work package. The early work package includes 15 to 20 percent of the total project work.

“The main package for the remainder of the project scope is tentatively scheduled to begin construction in May 2016,” said Garth Fernandez, senior transportation engineer and project manager of Caltrans.

He added that the project scope not only includes relocation of State Route 99, but also features 2.5 mi. (4 km) of the high-speed rail corridor improvements along the project limits.

Workers onsite represent six trades. About 90 workers will be onsite each day.

Night and weekend work are necessary because it is a time of low-volume traffic.

Impact on the Local Community

Because much of the work is done at night, minimal traffic delays are expected.

“Work on local city streets will cause some delays,” Fernandez said.

Delays are anticipated to be 10-15 minutes long through the work zone.

Fernandez added that some full street closures and detours will be necessary. He said the complete closure of Clinton Avenue for six months will be the most significant inconvenience the project will create.

The realignment is part of a corridor of high-speed rail projects within the Merced to Fresno project section. The tracks are being built between the existing freeway and the Union Pacific Railroad line. In addition, the realignment project is designed to reduce traffic congestion and enhance safety.

The work includes construction of three through lanes and one auxiliary lane for each direction on State Route 99. Also, workers will reconfigure the interchange at Clinton Avenue, which includes replacing the Clinton Avenue overcrossing.

As part of project plans, freeway ramps at Princeton, Shields and Dakota avenues will be permanently closed. However, during construction, Shields Avenue will remain open until early- to mid-2017.

Princeton and Dakota avenues will be closed off this year.

Also, northbound Woodson Avenue and northbound Parkway Drive will be closed to through traffic for about six months. However, access will continue for businesses and residents.

“We will be using continuously reinforced concrete pavement, a 40-year pavement section, for the new lanes on SR 99,” Fernandez said.

“We are working with the city of Fresno and the High-Speed Rail Authority for a location to place this access to ensure it will be used on the high-speed rail alignment or a nearby project,” Fernandez said.

He said the existing State Route 99 lanes are comprised of concrete and asphalt and will be completely removed and recycled.

Properties Still Need to be Acquired

To realign State Route 99, a total of 42 properties needed to be acquired. In November, Caltrans reported that parcel acquisition was lagging because eminent domain proceedings were needed on multiple parcels.

Also, a significant lead time was needed to obtain an Order of Possession.

“The properties to be acquired by eminent domain are taking longer,” Fernandez said. “However, the goal is to be able to continue to negotiate a settlement with the property owners and we are working toward that on a number of properties.”

So far 24 property owners have signed right-of–way contracts or agreed to Order of Possession. Another 14 properties are being acquired through eminent domain proceedings.

The remaining four properties are easements to be acquired from Union Pacific Railroad through a construction management agreement.

Initial work on the project includes removal of about 98 cu. yds. (75 cu m) of asphalt and concrete. The cost of that work comes is approximately $19,110.

The new SR 99 section will operate much more safely and efficiently because of elimination of the nonstandard partial interchanges at Dakota, Shields and Princeton avenues, Fernandez said.

“Clinton Avenue will have a standard, full-service interchange,” he said.

Also the project utilizes many local small businesses and a local labor force.