With three more stadiums holding at least 10,000 seats set to open next year, you can bet the state's stadium boom will only continue. 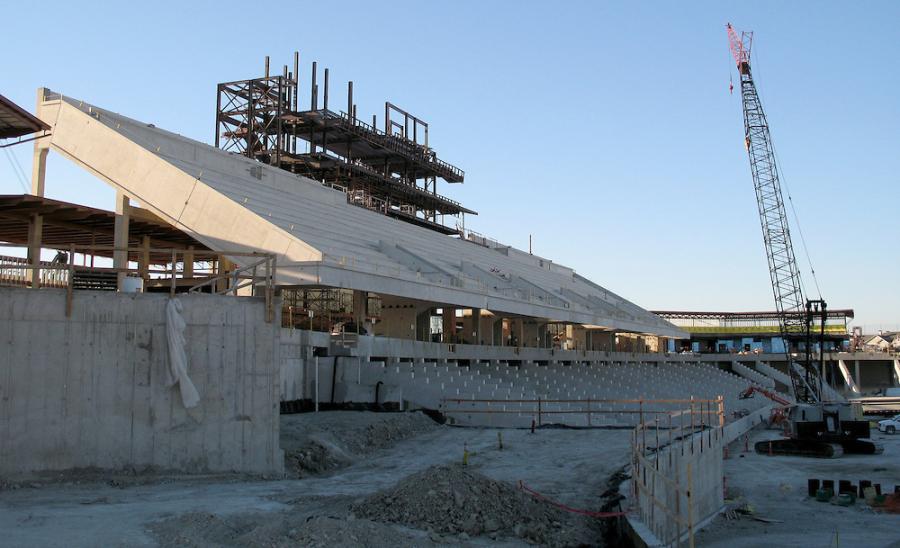 In Allen, an affluent small city north of Dallas with a median family income of $83,000, the school district rushed along its ambitious $60 million Eagle Stadium project and paid the price. After opening in 2012, the 18,000-seat stadium was forced to close for more than a year when cracks in the structure's foundation were discovered.

Everything is bigger in Texas, where going over the top to outdo your neighbor is not uncommon in the friendly spirit of competition. And when it comes to football? Forget about it. Texans take their pigskin so seriously that school districts are building stadiums and indoor practice facilities at such a rapid rate that parents don't even have a chance to bat an eye at their gargantuan price tags.

This month in Katy, a western suburb of Houston, the 12,000-seat Legacy Stadium will host its first high school football game on Aug. 31, when Katy Taylor High takes on Foster in the season opener. The stadium cost a reported $58 million to build, not to mention the additional $12.3 million that the Katy Independent School District ponied up for a new state of the art field house attached to the structure.

"In the suburbs, what you see are these very questionable projects around the state," James Quintero, of the conservative think tank Texas Public Policy Foundation, described to The Dallas Morning News. The usual practice in these typically wealthy suburban areas is to pass the buck for funding these elaborate football stadiums onto taxpayers through the passage of bond measures. Texas school districts owe more than $13,000 per student on their long-term debt, according to the National Council on School Facilities. That's the third-highest total in the nation.

The borrowing hasn't deterred other municipalities from getting in on the Texas stadium boom, only fueling further aggressiveness in order to keep up with the Joneses. In Allen, an affluent small city north of Dallas with a median family income of $83,000, the school district rushed along its ambitious $60 million Eagle Stadium project and paid the price. After opening in 2012, the 18,000-seat stadium was forced to close for more than a year when cracks in the structure's foundation were discovered. Eagle Stadium reopened in 2015, albeit $10 million in repairs later.

Less than 10 miles down the road, folks in McKinney couldn't stand the idea of their rivals in Allen having a nicer stadium. Supporting three high schools in the district made it a no-brainer for residents to approve a five-year, $220 million bond package that included upgrades to facilities district-wide, including the construction of a $70 million arena. "Oh, it's a rivalry," Adam Blanchet, a junior at McKinney North, told The Los Angeles Times when asked about the stadium race. "I have pride knowing my district is going to have the most expensive stadium in the country."

"Everybody knows how competitive all of the districts are up here in the Metroplex, and I'm not just talking about athletics," McKinney ISD athletic director Shawn Pratt said in an interview with The Dallas Morning News. "It's everything; we're competing for teachers, competing in academics, competing in athletics, competing in fine arts. And when your neighbor gets a competitive advantage on your programs or students, you want to provide your students with the same facilities that other programs have."

This never-ending quest to keep facilities as up to date as possible extends further than just football stadiums for high school athletic programs in Texas. In 2000, there were just 23 indoor sports practice facilities in the state. Since then that number has ballooned 140 percent, with more than a dozen of such facilities costing in excess of $5 million to build.

While some may argue that Texas school districts would better serve its student body by focusing more on spending on academic resources, these stadiums are what the people want – as evidenced by their voting tendencies. If they're willing to foot the outrageous bills, who's to say that these stadiums are wastes of money? They support hundreds of local jobs, serve as public meeting grounds on game night and boost local morale. And with three more stadiums holding at least 10,000 seats set to open next year, you can bet Texas' stadium boom will only continue.