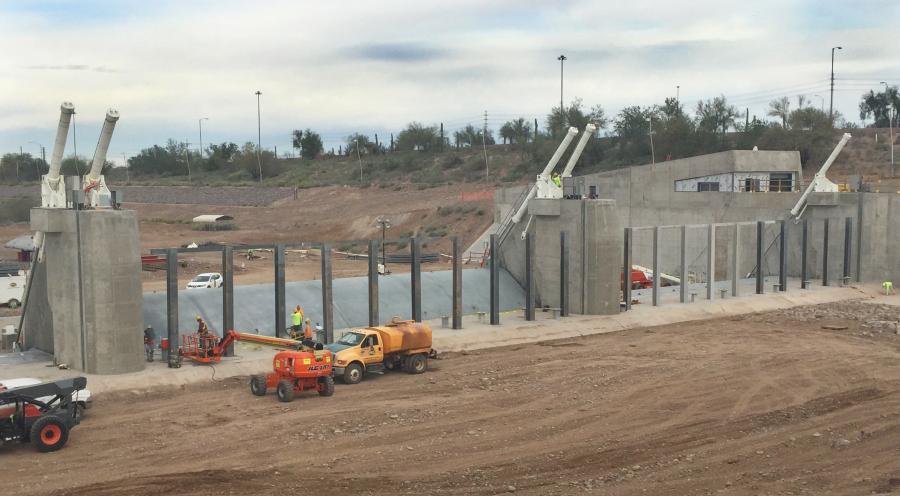 The new dam is the largest hydraulically-operated steel gate dam system in the nation.

An inflatable rubber dam at the west end of the lake has been removed. The new dam system features a hydraulically-operated steel gate system. Cost of the project, including removal of the rubber dam, is set at about $47 million.

The lake, with its new dam, was dedicated by the mayor in a ceremony on May 14.

The new dam is the largest hydraulically-operated steel gate dam system in the nation. Tempe officials describe the new dam as a reliable and cost-effective solution that is expected to last for decades.

The replacement project began Feb. 10, with pumping water out of the lake. Water from the lake was moved to a new Salt River Project canal system. From there it was used for irrigation of trees, parks and lawns.

Once the lake was drained and the new dam ready to operate, the lake was refilled with water from the Central Arizona Project.

The lake was closed for water activities, but areas around the lake including the pedestrian bridge and parks remained open.

No dirt had to be brought in to complete the project. However dirt did have to be moved in order to install the new dam.

Other than the lake being closed, the project had little impact on the surrounding community. No roads had to be closed.

Tempe-based PCL Construction was prime contractor of the project and also installed the hydraulic system. Gannett-Fleming of Phoenix was the engineering consultant; Schuff Steel of Phoenix provided the steel for dam gate fabrication; and Steel Fab of Fitchburg, Mass. did the fabrication. About 45 workers were on the job each day at the project site.

The Arizona Department of Water Quality, Army Corps of Engineers, FEMA and Flood Control District of Maricopa County partnered in the project. They also were the permitting agencies.

Decision to Replace the Dam

A decision to replace the dam dates back to July 20, 2010, when one of the rubber dam's two bladders ruptured causing water to flow into a nearby riverbed. Plans were then developed to replace the inflatable rubber bladders with a new and sturdier structure.

The lake opened in 1999 and at the time of the rupture the rubber bladders were already past their expected life span.

The gates are mounted onto a roller-compacted concrete foundation and reinforced concrete spillway slab about 100 ft. (30.5 m) downstream from the existing dam.

Hydraulic lifts will raise and lower the gates. The gates can be lowered to allow storm waters to pass through. They can then be raised to re-establish the lake.

About 2 ft. (.60 m) of water can pass over the top of the gates when they are in a fully-upright position.

More than 20 dam alternatives were explored before choosing the steel-gate system. One advantage is that it will allow the lake to transition into a river during major flooding.

The project team knew going in to the construction project that water removal was going to be challenging. However, no one knew just how difficult an undertaking it would be.

“We had a lot of water coming in from the north slope, which was expected, but not at the rate it was flowing,” said Adam Gordon, PCL Construction project manager, in a PCL Construction website article. “This project is also 100 feet downstream of an existing dam that holds approximately one billion gallons of water. Water is coming from every direction.”

Additionally, weather posed some problems in the project's early stages. The Tempe area experienced record-breaking rains in September 2014. The rains came while workers were digging the dam foundation, which flooded the job site.

The improved lake will make Tempe safer and allow for nearby development. The lake has already benefitted the city with about $1.5 billion in economic impact over a 16-year period.

About 40,000 people work within a mile of Tempe Town Lake and 4,000 people live near its shores. The lake provides recreational opportunities and a relaxing community gathering place.