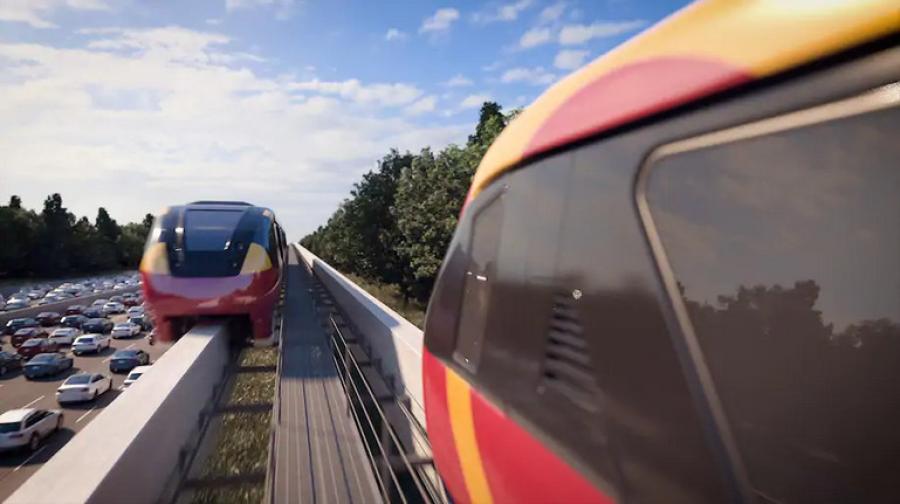 A rendering of a monorail that Montgomery County developer Robert O. Eisinger of Promark Partners is exploring. He has hired engineering consultants to study the possibility of building the 27-mi. monorail system between Shady Grove and Frederick. (Illustration by Interface Multimedia, courtesy of The High Road Foundation)

A 27-mi. monorail along Interstate 270 between Shady Grove and Frederick in Maryland would generate nearly $4 billion more in economic benefits over three decades than it would cost to build and operate, according to a new study funded by monorail supporters.

The line would save time — and, in turn, money — both for monorail passengers and motorists who would enjoy less congestion on I-270, the study found. A monorail also would increase business productivity and make the Washington region more economically competitive.

The study by Boston-based economic consulting firm EBP is part of developer Robert O. Eisinger's quest to persuade the Maryland Department of Transportation (MDOT) to build a monorail between Montgomery and Frederick counties. Eisinger's pro-monorail High Road Foundation funded the $68,000 study, mostly with his own money, he said. The group previously funded engineering and travel demand analyses of the proposal.

"First we proved you could physically do it, then we proved there's a demand for it," said Eisinger, a managing member at Rockville-based Promark Partners. "We've just proved that, economically, you can't afford not to do this."

He said he has not yet shared the findings with MDOT.

While Eisinger said the monorail could complement Maryland Gov. Larry Hogan's plan to build toll lanes on I-270, state transportation officials haven't committed to including it in their upcoming environmental review of the lanes north of I-370.

MDOT spokeswoman Erin Henson said the agency is still devising the "preliminary alternatives" that will be analyzed. However, she said, the state is doing its own "monorail feasibility study" that will be released later this fall.

"As studies have shown, the national capital region can benefit from multiple options, including increased telework, transit, and managed [toll] lanes for long-term congestion relief," Henson said in an email. "We are committed to finding all possible solutions to relieve congestion for the citizens of Maryland."

Eisinger said he knows some people will scoff at the idea of an elevated monorail whizzing above I-270 traffic. He's heard the Disney World jokes.

But he and other local monorail supporters point to more than 40 monorail systems worldwide, and Eisinger said he's heard a "significant amount of political support" from the Montgomery County Council and state lawmakers. While MDOT hasn't committed to the idea, Eisinger said, "I'm not getting any negative feedback from them."

Delegate Kumar P. Barve, representing Montgomery County, chairman of the Maryland House Environment and Transportation Committee, said he became intrigued with Eisinger's idea after holding a hearing on it in January.

He said he was particularly impressed that a monorail would fit within I-270's right of way, allowing it to avoid the controversy that often kills transportation projects that affect homes and other adjacent properties.

"I personally think any plan that doesn't require the acquisition of land would be a winner right from the start," Barve said.

Building a monorail and then operating and maintaining it over 28 years would cost $2.7 billion, the study found. Construction would cost $3.6 billion, but some of that value would remain in the system at the end of the 28 years, the analysts reported.

Meanwhile, the economic benefits of faster, safer and more reliable travel would come to $6.6 billion, leaving an overall $3.9 billion benefit, the study found.

"When you run the numbers, you see the benefits clearly outweighing the costs," said Naomi Stein, one of the study's authors.

Under Eisinger's proposal, the monorail would run between the Frederick MARC commuter rail station and the Shady Grove Metro station in Rockville, with stations in Urbana, Clarksburg, Germantown and Metropolitan Grove.

Clustering new homes and jobs around monorail stations would help the area grow in a more sustainable and environmentally friendly way, Eisinger said. His company owns property across the Washington region, he said, but not at any of the proposed monorail stations.

The study assumed monorail trains would arrive every six minutes during the morning and evening rush and every 12 minutes off-peak. The trip between Frederick and Shady Grove was assumed to take about 47 minutes with an average speed of 35 miles per hour, according to a previous foundation-funded study by Massachusetts-based Cambridge Systematics. Such a scenario would attract about 34,800 passengers daily in the first year, that analysis said.

Eisinger said he believes a monorail could be built and operated via a public-private partnership with teams of companies financing its construction and operating it in exchange for state payments to cover their debt, costs and a profit.

He added that he's concerned about the recent dissolution of Maryland's $5.6 billion public-private partnership on the state's light-rail Purple Line project. However, he said, because a monorail wouldn't require additional right of way or utility relocations, it would have a significantly lower risk of the kinds of cost overruns that have plagued the Purple Line project.