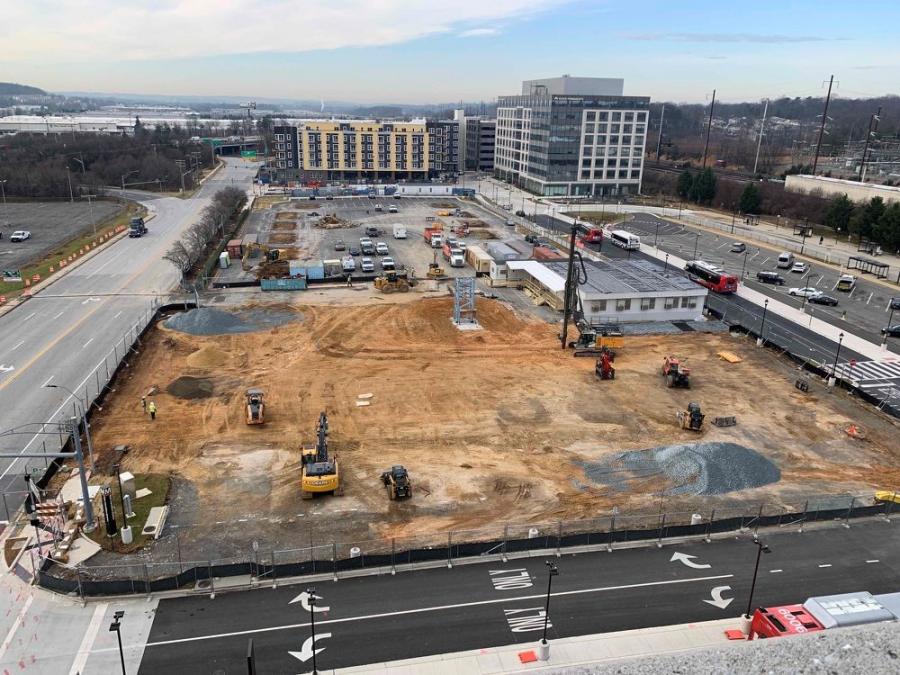 The new building for Metro Washington, D.C., is being constructed on a former parking lot for commuters at the New Carrolton, Md., Metro station.

For decades, the New Carrolton Metro station in suburban Maryland has been a key transportation hub. Commuters can catch Metro trains to Washington, D.C., and Virginia, the Amtrak to New York City and Boston and the Greyhound bus to points all over the United States. When construction on the Purple Line is restarted, commuters also will be able to ride to the busy job center of Bethesda, Md. The station sits on a connecting loop to D.C.'s bustling 495 beltway.

The location has been ripe for development for some time and that is finally happening. This multimodal transportation hub has recently become home to a Kaiser Permanente building with 1,000 employees, luxury apartment buildings and now, one of the headquarters buildings for Washington Metro Area Transit Authority (WMATA). 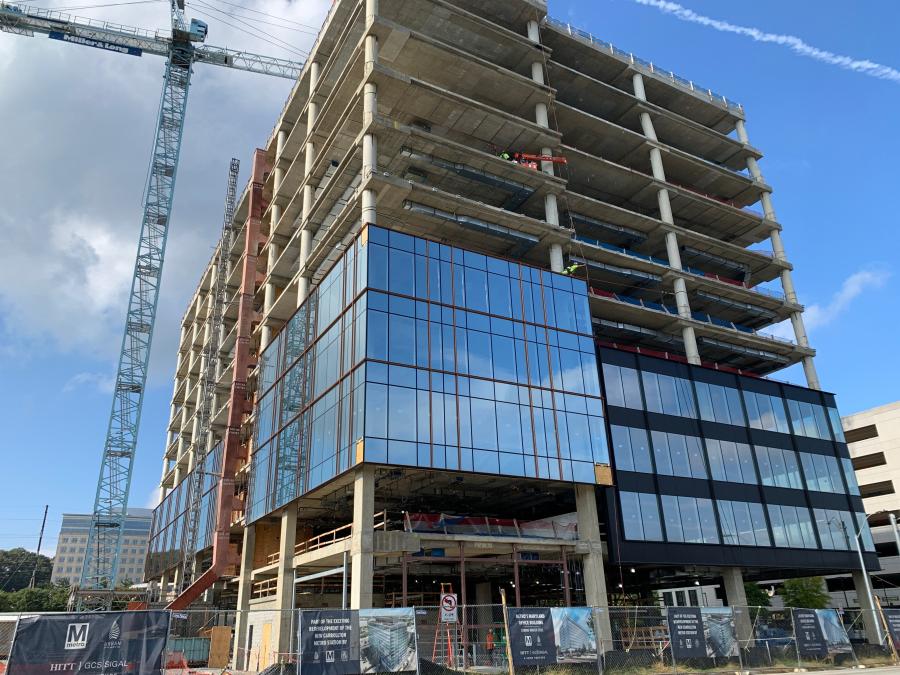 When construction began on the WMATA building, Prince George's County Executive Angela Alsobrooks commented on the hopes for the new construction as well as for building that is planned for some 2.5 million sq. ft. of the development.

"We are looking forward to becoming home to WMATA," said Alsobrooks. "New Carrolton is the top multimodal transportation hub in Maryland and represents an economic renaissance that is happening in this county. The work that is happening here, thanks to Urban Atlantic Development as well, will provide quality entertainment, dining and homes to a growing, vibrant community."

The construction project is part of a plan to save Metro $130 million over the next 20 years by reducing its office buildings from 10 to four. In addition to the New Carrolton construction, Metro is building new offices at L'Enfant Plaza in Washington, D.C., and a new office building near Eisenhower Avenue Metro Station in Alexandria, Va.

HITT Contracting, based out of Falls Church, Va., is supervising the construction activities for the Metro building in New Carrolton, Md. The construction began in October 2020 with completion planned for October 2022. Currently, the site bristles with cranes and other equipment as workers seek to put a "skin" on the structure so additional work can continue during the colder months.

"This is a Class A office building with 11 stories slab on grade," said Eric Masciantonio, who is managing the project for HITT. "One of the special features of the building will be a rooftop deck, which will be part of a green roof. This deck will have succulent grasses and ground cover."

The green roof is just one aspect of the building that should have it on the road to a gold LEED designation. This certification tracks green building processes and includes recycling as well as other measures.

The building planners have brought in a spider crane to place the individual glass panes that will soon enclose the building.

"It is a glass slab edge anchored curtain wall system," said Masciantonio. "The spider crane is a low-elevation crane that will operate inside each floor. The crane picks up the glass and sweeps it into place. Altogether, there will be about 1,250 panes by the time the building is complete."

Once the panes are in place, the construction team will bring permanent power into the building and get the HVAC systems running.

"We plan to have that completed in November, which will allow us to work efficiently inside during the colder weather," Masciantonio said.

A quality building project must begin with a quality foundation. HITT took special care for the Metro buildings foundation.

"We brought in equipment that enabled us to drill the piers and place them in a single operation," said Masciantonio. "We then spread the footings on top of the piers. The columns rise to the second-floor deck, so the building is very solid." 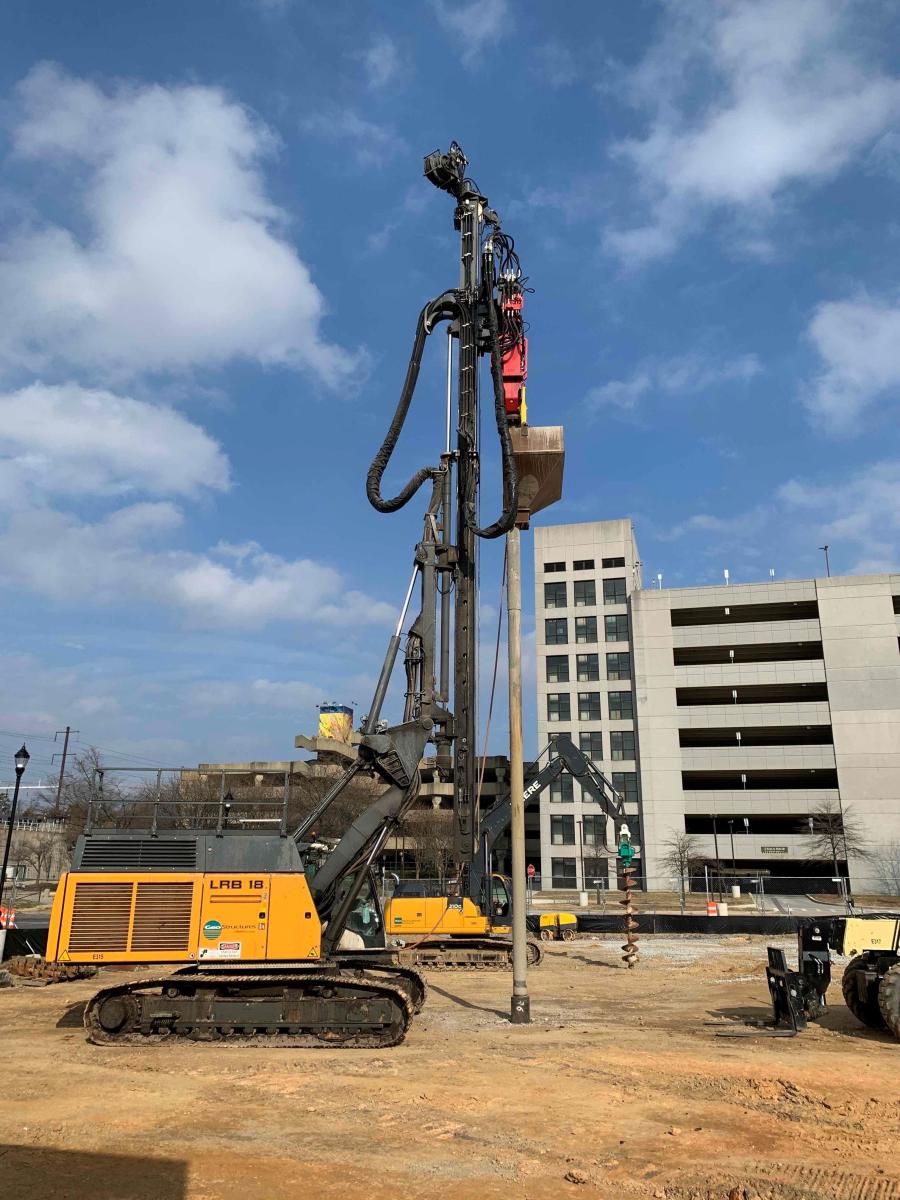 The construction team drilled 650 piers with columns 6 in. in diameter. Workers filled the piers with aggregate slurry then compacted them for maximum density. Finally, they cut off the tops of the piers and spread the footings.

"We used a geo pier system," said Masciantonio. "Our construction team spread the footers then built the concrete superstructure. We built post-tension decks. The deepest point of the foundation was a 25-ft.-deep hole for the elevator pit."

The HITT Contracting Team employed post-tension slab work on each floor. Instead of using steel rebar throughout, the team used cables attached to one side while the concrete was poured. Then as the concrete dried, machinery stretched the cables keeping the concrete under tension providing more firmness for the concrete.

Like most construction projects during this time, HITT had to use a protocol for COVID-19.

"It's not unusual to have 300 workers on the site in a single day," said Masciantonio. "We had site marshals that would survey the employees and contractors coming on the site each day. We had no outbreaks or delays because of COVID."

The building was designed by Gensler Architects.

At soon as the glass exterior is finished, workers will be constructing bathrooms and framing interior walls in a similar manner to what happens in home construction. Of course, the interior construction will adhere to commercial standards.

The interior work is being made possible by a Terex Peiner SK 415 tower crane outside the building. Machine operators use this crane to ferry equipment, including the curtain wall units, to the upper decks. This saves time and money in the construction process.

The building's exterior beams are coated for an air and vapor barrier preventing rain and condensation from corroding the metal. The steel is then coated with a limestone rain screen for both practical and aesthetic purposes.

"It is exciting to be part of the redevelopment of this area," Masciantonio said. "Our team had some challenges, but we enjoyed bringing solutions to the problems we encountered. We also liked working with Jacobs Engineering and our client WMATA." CEG