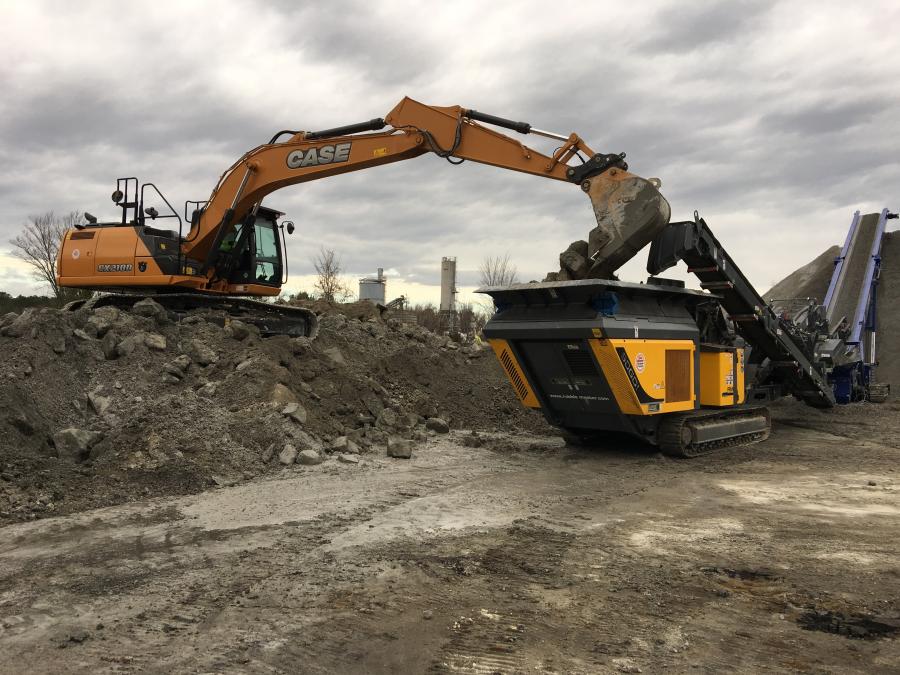 Superior Concrete uses its Rubble Master crusher to create a spec material that can be used for anything from driveways, to farm paths or parking lots.

At the end of the day, ready mixed concrete producers are often left with excess concrete in their concrete trucks, and not many options for disposal. One option is simple: haul it off to a landfill for disposal. A second choice is akin to using your lemons to make lemonade: crushing the leftover concrete to be re-used, which is both an environmental and monetary win.

“These are materials that are left over from a job that didn't use all that was in the truck, as well as when the drivers come back to the plant they have to clean out the trucks,” explained Matt Soddy, Superior Concrete president and owner.

“If they weren't going to crush then they would have to have somebody come in with an excavator when the bin got full and they would have to break it up into manageable pieces, load the stuff up and haul it to a landfill somewhere. And, so obviously with that situation it's all cost or expense to them.”

Enter Superior Concrete, who uses its Rubble Master crusher to create a spec material that can be used for anything from driveways, to farm paths or parking lots.

“We've used it and paved over it in parking lots. It's the same spec. I have actually had testing companies do gradations on it. It meets the state's spec. They run it through sifts, because we are also running it through a screener. We are not just crushing; we are crushing and running through a screener with a 1.5 inch deck on it. So, we are making that same spec as if you go to the quarry and buy it there,” Soddy said.

The crusher used for these tasks is the Rubble Master RM-90GO!

“Rubble Master Manufactures 4 models of high performance impact crushers presently, the RM 60, a RM 70GO!, RM 90GO!, and a RM 100GO!” said Hills Machinery's Billy Tedder. “This machine is unique as far as the size, easy to haul, easy to move, without special permits with your Lowboy, which saves the customer money and time.”

“The setup is fast, you can literally come in with the machine unloaded off the truck and in 10 minutes be crushing concrete. So the set up time is minimal, which again saves the customer time and money.”

Superior chose the RM 90GO! based on the needs of its customers.

“We've got about 14 concrete plants that we go crush for. It's automatic, it's kind of a big circle. And, I feel that for the size of the job that the RM 90GO! is perfect, one truck hauls it in and out. No special permits involved, fast set up and moves quickly,” Soddy said.

“This is my fourth crusher since we have started doing it. We own two now. We are creating a second group — the first or the other machine that we have is a larger machine … it's actually two separate machines. It takes two Lowboys to haul it. So, what I am looking at is based on our need of the customer.

“There is a fine line where I had a smaller unit than this at one time and then we've got a bigger unit where you get…that you are not too small but it works for…but right now it's going to give us some diversification of having a bigger unit and the smaller unit.”

Superior Concrete's primary business is pouring and finishing concrete on commercial and industrial jobs; approximately 15 percent of the business is crushing.

“I got into this because I basically deal with all the concrete plants and I just knew that they had the need for somebody to do this. There were a couple guys that did it forever, but today there's not that many people that do it. There were some others that did it and went out of business. You would think that would scare most people away, but somehow it attracted me since there is a need.

“We have had some jobs where this material has to be used … you can't get it out of the quarry. They want re-cycled material. It meets part of the LEED programs; it meets as they say it has to be re-cycled material. And, I think that is going to get bigger as more of the screen environmental stuff is involved.”

About the Rubble Master 90 Go!

According to Tedder the Rubble Master RM 90GO! Is unique in that it is able to travel and crush at the same time, this increases production and saves time and money!

“The diesel engine is powering the impactor, hydraulic pump, and a generator. The hydraulics on the machine are used to track the unit and fold out the conveyors. All of your conveyor belt motors are electric; this enables you to run a smaller engine which saves fuel. The engine has a direct drive to the impactor, or the rotor, some call it…to crush the concrete, which is a great system.”

The crusher has a screen deck, so all the material being screened is coming through the deck. All the over-sized material comes off the screen and goes up the conveyor back into the crusher feed hoper to be re-sized, making this a closed-loop system. Superior Concrete also purchased a 60 ft. Edge TS65 track stacker from Hills Machinery Co.; this is used to convey the screened product to a stockpile eliminating the need for mobile equipment.

“We equipped the Edge Track Stacker with Loadrite Scales. We tiered the machine; we weighed it against a certified scale. We weighed five tons of material…only 20 pounds difference. So, it's pretty accurate. Basically, this could be a one-man operation. The crusher is controlled by the operator in the excavator. He can do all the functions that he needs with the remote control, you can walk the machine and crush at the same time and that is kind of unique in crushing; normally you have to shut the machine down, get off of the excavator and go to the ground to move it.

Keeping Up With Case Excavators

Superior Concrete has six Case excavators in the fleet. In addition to their fuel economy and rear view cameras, Soddy also likes that his operators can change from a bucket to a hydraulic breaker quickly and easily due to the addition of Werk-brau hydraulic couplers on his Case 210D excavators.

“That was very important for me with this because these crews, which in the whole crushing business I've got, there's three employees … there is not a lot of manpower. Which is one thing I like about it, versus my other business takes 75 employees to do about the same amount of work. But, it doesn't take a lot of people and you can rely on equipment, nowadays everybody has labor problems … so it's a big thing that you can rely on equipment to do a labor-intensive job,” he said.

The Case maintenance plans also are a big selling point for Soddy.

“I've got one mechanic. As I keep adding equipment there was something that I really liked, the maintenance offered by Hills Machinery. I am not really adding it to my mechanic's workload because Hills is going to maintain them.”

“The 36 month/3000 hour warranty comes with Case excavators as well and three years of factory recommended maintenance [Procare] and SiteWatch, which is the Case Telematics Solution, so the customer can see where the machines are and how much fuel they are burning, it is basically for security, maintenance and productivity. You can see how long the machines are idling…what kind of times he is running idle versus heavy production or general light production,” said Tedder.

Hills Machinery opened its doors in 2007 to sell, rent, and repair equipment. In 2010, Hills Machinery was appointed the new Case Construction dealer in North and South Carolina.

Hills Machinery has four locations in North Carolina and three in South Carolina, which puts it in service distance from any of Superior's crushing locations.