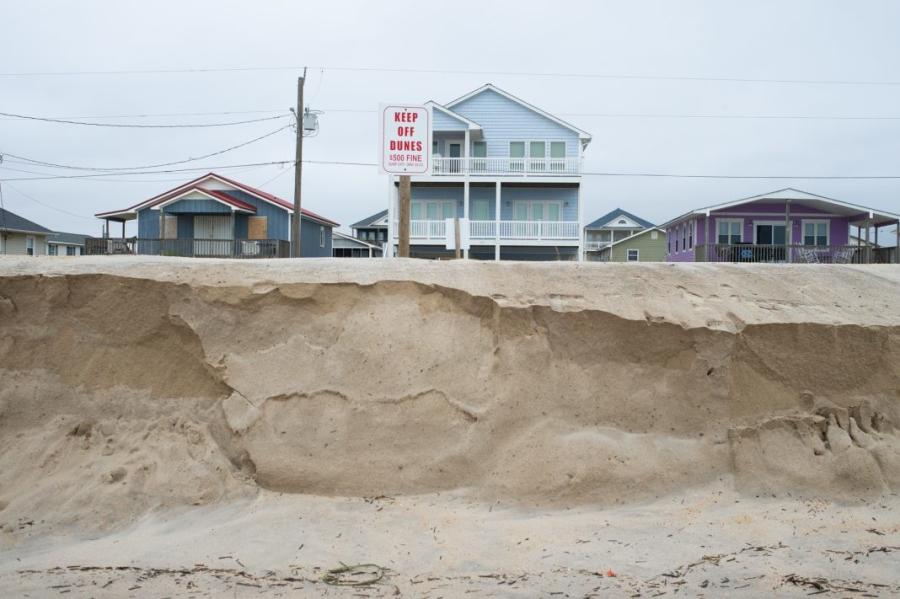 The town of Surf City on North Carolina's Topsail island is looking to finally attain its coveted status as a "Corps-engineered beach" at an estimated cost of nearly $25 million.

Surf City is expected to pay approximately $24.9 million for its 6-mi.-long portion of a 52,150-ft. berm and dune system to be built by the U.S. Army Corps of Engineers (USACE) from the town's southern boundary with Topsail Beach to the northern end of the island.

The projected cost for constructing just shy of 10 mi. of dune and berm system is approximately $237 million, according to a letter sent by Surf City Town Manager Kyle Breuer to Mayor Doug Medlin. Congress has already appropriated that money to the USACE, according to Breuer.

That figure will be broken down into financial commitments from the federal government (65 percent), the state (17.5 percent), and the towns of Surf City and North Topsail Beach (at a combined 17.5 percent), with the latter community expected to kick in $16.6 million.

Breuer emphasized that these are estimated numbers, as the total amounts due will be based on the volume of sand dumped onto the roughly 6-mi. stretch of beach in Surf City and the 3.9 mi.-stretch in North Topsail Beach. The berm and dune line will extend to the southern edge of the Coastal Barrier Resources Act (CBRA) Zone in North Topsail Beach.

He said the first phase of the project will start late this year or in early 2021 at the Surf City-Topsail Beach boundary, proceeding north roughly 2 mi. The next phases will continue until the project is completed, expected to be sometime in the spring of 2024.

A Project Partnership Agreement (PPA) has established the responsibilities of both beach towns, requiring continued coordination between the two throughout construction as well as throughout a 50-year project life — during which time renourishment work will occur at six-year intervals "and funds will be budgeted accordingly," according to Breuer.

The work will be split equally between the federal and non-federal partners, and Breuer said the Surf City's Nourishment Funds will continue to be budgeted for the town's 50-50 cost-share with the state.

On Jan. 13, U.S. Senators Richard Burr and Thom Tillis announced that the two towns would receive money provided by Congress through the Disaster Relief Act. According to an email from Burr's office, both senators led efforts to secure the federal funding and, along with U.S. Representative David Rouzer, wrote to the USACE advocating for the beach towns.

"The Surf City and North Topsail Beach project is a critical, shovel-ready coastal storm reduction project, and constructing it is a priority for North Carolina, a state seriously impacted by Hurricane Florence," the joint letter stated.

It went on to explain to the USACE that the Topsail Island project is designed to prevent disastrous losses by protecting vulnerable areas of the island "that lost storm protection capabilities in previous storms and through ongoing erosion." Hurricanes Fran, Bertha, and Floyd in the late 1990s eroded approximately 25 feet of protective beach width over the project area, according to the congressmen.

"Today, shoreline erosion continues at a rate of two to three feet per year in some portions of the project area," the letter continued. "Hurricane Florence [in 2018] further eroded the beaches and primary dune structure. The Corps estimates average damages exceed $19 million for every year the project is not constructed."

Florence caused more than $100 million in damages to the towns' beaches and infrastructure and if it had made landfall as a Category 3 or 4 storm, as was predicted days before, "the damage would have been catastrophic," the elected officials wrote.

"The towns of Surf City and North Topsail Beach are aware of the risks they face and have sought to improve beach conditions on their own," according to the letter.

North Carolina Gov. Roy Cooper also praised the project's funding, saying the substantial investment by USACE will help residents become "more resilient against future storms. North Carolinians have been hit hard by recent storms, and I appreciate the efforts of our federal partners as we work to rebuild smarter and stronger than ever."