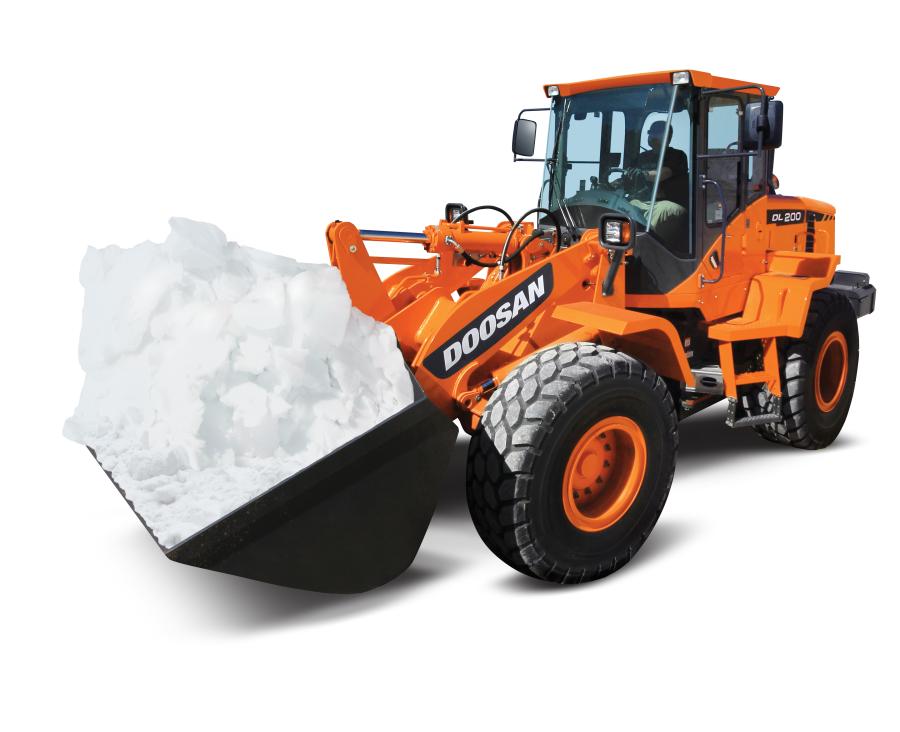 The DL200-3 wheel loader with a bucket can easily handle the snow.

Stocking the right equipment, preparing it at various locations and having dependable employees on standby are three reasons George Sarris survived the worst winter in Boston's history. During winter of 2014-2015, Boston, Mass., broke an all-time season snow record — which meant lots of work for snow removal specialists.

Sarris and his family own and operate Sarris Auto and Truck Equipment Inc. Sarris Snow Removal is a division of Sarris Auto and Truck Equipment, and specializes in snow and ice removal. When Boston was smacked in January and February 2015 with back-to-back mega snowstorms, Sarris fought back with snow and ice removal equipment to help his customers maintain their daily schedules.

Sarris was introduced to Doosan wheel loaders more than three years ago when he began renting them to handle large snow removal tasks. It turned out so well that he purchased his first Doosan wheel loaders for the following winter. “I bought two Doosan wheel loaders after I had a successful winter because they are productive machines,” Sarris said. “The quality of the machines is what impressed me. They do an excellent job of removing snow, and the cab is roomy and comfortable for the operators.

“In the snow removal industry, you have to have good equipment to be able to do the work,” he said. “You have to have dependable machines and you have to do a good job. Any kind of edge you can get is a good thing.”

Sarris and his equipment operators clear snow from large municipal parking lots, big-box home improvement stores, area shopping malls and even a few residential neighborhoods. To handle bulk snow removal, Sarris has purchased five Doosan wheel loaders. “The Doosan DL200-3 and DL200TC-3 are the perfect size for me,” he said. “The DL200-3 wheel loader with a bucket can easily handle the snow.”

Altogether, Sarris has 40 pieces of equipment, including trucks, some with salt and sand spreaders in the cargo box and plows on the front. He owns four Bobcat skid-steer loaders and snow-removal attachments to clear snow from areas where his larger machines and trucks can't fit.

Sarris believes in planning for snow storms, having his equipment ready and employees on call, available to respond quickly after a storm. “I have my equipment on site, and it is serviced and fueled,” he said. “I call my operators and put them on standby when a storm is approaching. I have dedicated employees at certain locations and they go to work as soon as they can.” Many of his employees are laid off from other jobs in winter months due to seasonal employment. “I have a lot of work in winter, so I keep them busy.”

Commercial centers want their parking lots free of snow before they open each morning. That can present a challenge for Sarris, depending on the timing of the snow storm, but his crews do their best to have the lot as clear as possible before employees and customers start arriving. “We try to clear as much as we can before the stores open, depending on the timing of the snow event,” he explained. “We do a lot of our work after hours and in the early morning. When you get snow early in the morning and the store has to open at 7 a.m., you need to move quickly.

“We had a crazy winter this past year. There were several big snowstorms. It was a test on a lot of our equipment and our mental abilities; it was very challenging.”

Where to Put All the Snow?

Winter storms Juno and Marcus ranked sixth and seventh for Boston snowstorms, based on snowfall, respectively. With all of that snow and little room to put it, Sarris had to think outside of the box.

“We hauled some of it on site and stockpiled it,” he said. “In Watertown, we joined forces with another company that has a snow melter and we melted the snow from an entire parking lot.”

Snow removal can be a challenging business because of the unpredictability of the work. Unlike planned construction job sites, Sarris has to be prepared 24/7 in winter to respond to a storm. “When the big snowstorms strike, you need to get things done quickly. If you don't have the right equipment, you are not going to keep up.”

(This story was republished with permission from Doosan's DoMore Magazine, Winter 2016 issue.)